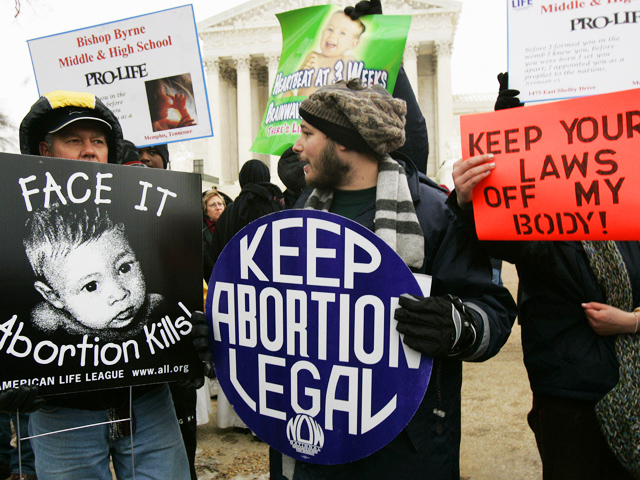 NEW YORK -- With a deeper-than-ever split between Republicans and Democrats over abortion, activists on both sides of the debate foresee a 2016 presidential campaign in which the nominees tackle the volatile topic more aggressively than in past elections.

Friction over the issue also is likely to surface in key Senate races. And the opposing camps will be further energized by Republican-led congressional investigations of Planned Parenthood and by Supreme Court consideration of tough anti-abortion laws in Texas.

"It's an amazing convergence of events," said Charmaine Yoest, CEO of the anti-abortion group Americans United for Life. "We haven't seen a moment like this for 40 years."

In the presidential race, Democratic front-runner Hillary Clinton is a longtime defender of abortion rights and has voiced strong support for Planned Parenthood - a major provider of abortions, health screenings and contraceptives - as it is assailed by anti-abortion activists and Republican officeholders.

In contrast, nearly all of the GOP candidates favor overturning the Supreme Court's 1973 Roe v. Wade decision that legalized abortion nationwide. Some of the top contenders - including Sens. Ted Cruz and Marco Rubio - disapprove of abortions even in cases of rape and incest.

"We may very well have the most extreme Republican presidential nominee since Roe - a nominee who's not in favor of abortion in any possible way," said Stephanie Schriock, president of EMILY's List. The organization, which supports female candidates who back abortion rights, says it is en route to breaking its fundraising records. A similar claim is made by some anti-abortion political action groups.

What's changed for this election? One factor is the increased polarization of the two major parties. Only a handful of anti-abortion Democrats and abortion-rights Republicans remain in Congress, and recent votes attempting to ban late-term abortions and halt federal funding to Planned Parenthood closely followed party lines.

Another difference: Republicans in the presidential field and in Congress seem more willing than in past campaigns to take the offensive on abortion-related issues. Past nominees George W. Bush, John McCain and Mitt Romney opposed abortion but were not as outspoken as some of the current GOP candidates.

"Abortion will bubble over into the general election," said Marjorie Dannenfelser, president of the Susan B. Anthony List, which supports female candidates opposed to abortion. "If you don't know how to handle this issue, you will be eviscerated."

As the campaign unfolds, other factors will help keep the abortion debate in the spotlight.

The Supreme Court will be hearing arguments, probably in March, regarding a Texas law enacted in 2013 that would force numerous abortion clinics to close. One contested provision requires abortion facilities to be constructed like surgical centers; another says doctors performing abortions at clinics must have admitting privileges at a local hospital.

The Texas dispute will have echoes in other states as social conservatives lobby for more laws restricting abortion. Americans United for Life plans a multistate push for a package of bills called the Infants' Protection Project; one measure would ban abortions performed because of fetal abnormalities such as Down syndrome while another would ban abortions after five months of pregnancy.

Also unfolding during the campaign will be a new investigation launched by House Republicans to examine the practices of Planned Parenthood and other major abortion providers. The panel's chair, Rep. Marsha Blackburn of Tennessee, says its work will likely continue past Election Day.

The investigation - denounced by Democrats as a partisan witch hunt - is among several congressional and state probes resulting from the release of undercover videos made by anti-abortion activists. They claim the videos show Planned Parenthood officials negotiating the sale of fetal tissue in violation of federal law; Planned Parenthood denies any wrongdoing and says the programs in question at a handful of its clinics entailed legal donations of fetal tissue.

Cruz is among many Republicans who have already passed judgment on Planned Parenthood, calling it "an ongoing criminal enterprise." He welcomed the endorsement of anti-abortion activist Troy Newman, who helped orchestrate the undercover video operation.

Donald Trump, who leads the GOP presidential polls, has been harder to pin down on the issue. He describes himself as "pro-life" and open to defunding Planned Parenthood, while acknowledging that he held different views in the past.

Planned Parenthood's leaders say a majority of U.S. voters oppose efforts to cut off its federal funding, most of which subsidizes non-abortion health services for patients on Medicaid. Planned Parenthood's political action fund hopes to spend a record amount - more than $15 million - on election-related advocacy.

The fund's executive vice president, Dawn Laguens, contends that some GOP presidential hopefuls, including Cruz and Rubio, may have hurt their general election prospects by making strong bids for anti-abortion votes in the primaries.

"They've gone so far out on the limb that they won't be able to crawl back," she said.

Abortion and Planned Parenthood are likely to surface as divisive issues in several of the races that will decide control of the Senate.

Other key Senate races likely to feature sharp divisions over abortion include those in Pennsylvania, Nevada, Wisconsin and the crucial presidential battleground of Ohio, where GOP incumbent Rob Portman is expected to be challenged by former Democratic Gov. Ted Strickland.