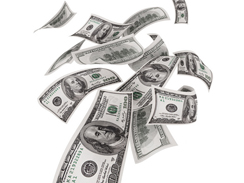 These simple facts show why most investors should prefer passive funds over active funds. A recent Morningstar article went one step further by breaking down the performances of both active and passive funds.

Morningstar's Michael Rawson focused on the fact that in attempting to beat the market (or an appropriate benchmark), active managers run the risk of underperforming. He noted that while the median of 682 actively managed funds in the large-blend category returned 5.6 percent over 10 years, the median of 169 index funds returned 6 percent -- essentially the sort of underperformance we would expect to see.

He went on to note that while the difference is relatively small (though it compounds over time to a significant dollar amount), the dispersion of returns between the active funds and the index funds was quite large. The bottom 5 percent of active funds returned 3.2 percent, while the top 95 percent returned 8.2 percent, a much greater disparity than between the top and bottom 5 percent of index funds. Not only did the index funds outperform, but a risk-averse investor should clearly have a strong preference for the smaller dispersion of returns.

Think about your reaction to each potential bet. Most investors would be more fearful of the larger bet, even though there's statistically no difference between the two. You have just as good of a chance of winning $1 as winning $10,000.

Rawson's article shows that active funds have had a wider range of possible outcomes, which means the potential for larger gains, but also larger losses. Investors who reacted to the coin flip example by being more nervous at the larger amount should consider this when choosing between active and passive funds.

Charles Ellis, author of "Winning the Loser's Game," provides us with further evidence in his recent article "Murder on the Orient Express." Ellis describes the persistent failure of institutional investors to achieve their ubiquitous, but ephemeral, goal of beating the market. He notes that the extensive and readily available data shows that the persistence of outperformance of active managers is well below what we would expect from pure chance (randomness).

For example in a random 12-month period, about 60 percent of mutual fund managers underperform. As you lengthen the time period, the failure rate increases. At 10 years, the percent of managers who fail rises to about 70 percent, and at 20 years it is about 80 percent. Making matters worse is that the equity managers that underperform do so by roughly twice as much as the "outperforming" funds beat their chosen benchmarks. Thus, the risk-adjusted odds of outperformance become more daunting.

Ellis also notes that new research on the performance of institutional portfolios shows that, after risk adjustment, 24 percent of funds fall significantly short of their chosen market benchmark, 75 percent of funds roughly match the market and well less than 1 percent achieve superior results after costs. Why do people, especially those who are risk-averse, keep playing a game where only 1 percent of the players win and 24 percent lose?

And in light of the above, why do most individual investors still choose to invest in actively managed funds? Two possible explanations:

Given the evidence, it seems clear that the rational choice is not to play the game of active investing. Accepting market returns by investing in passively managed funds is the triumph of wisdom and experience over hype and hope.