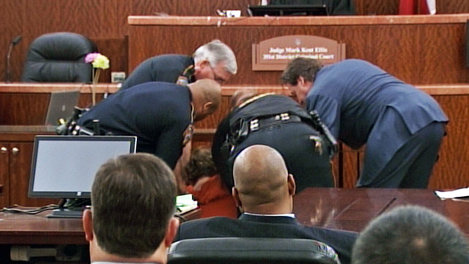 HOUSTON - A man charged with capital murder in the shooting deaths of four children and their parents collapsed Friday morning as the charges were recited against him in a Houston court, reports CBS affiliate KHOU.

Ronald Lee Haskell was standing before a state district judge during a probable cause hearing when he fell to the ground. Deputies lifted him to his feet and the 33-year-old stood for about another minute before collapsing again. He was taken out of the courtroom in a wheelchair, according to the station.

Haskell is accused of fatally shooting his former sister-in-law, her husband and four of her children Wednesday evening in the family's suburban Houston home in Spring, Texas.

In court, prosecutors said the suspect planned the murders ahead of time and that his actions were calculated. They are seeking a grand jury capital murder indictment, KHOU reports. Prosecutors alleged Haskell fainted in court because he finally realized that "this is real and there are real consequences" to the crimes he is accused of committing.

Haskell's court-appointed attorney, Doug Durham, said his client was not fully aware of what he was doing and that he suffers from a mental illness.

"His face, he obviously lost blood in his face, and his knees buckled," Durham said. "He's scared. I think he has a limited mental capacity of what's going on."

Investigators said the suspect shot his victims - Katie, 33, and Stephen Stay, 39, and their five children - execution-style. Dressed as a delivery man, Haskell allegedly forced his way into the home of his ex-wife's sister, holding her children at gunpoint until their parents arrived. He then allegedly tied them all up and opened fire. Only one of the victims, a 15-year-old girl, survived the shootings. She played dead and called 911 after the shooter left.

According to KHOU, after a brief chase with authorities, Haskell was cornered in a cul-de-sac three miles away from the crime scene. Neighbors said the suspect was stone-faced and did not respond to repeated commands from authorities to surrender.

Haskell was boxed in by a SWAT team for hours before finally surrendering. The station reports investigators believe the suspect was on his way to kill more of his ex-wife's family when police intercepted the vehicle.

Police said Haskell killed the family because he couldn't find his ex-wife, who had fled to Texas to get away from him. The suspected shooter had a long history of domestic violence.