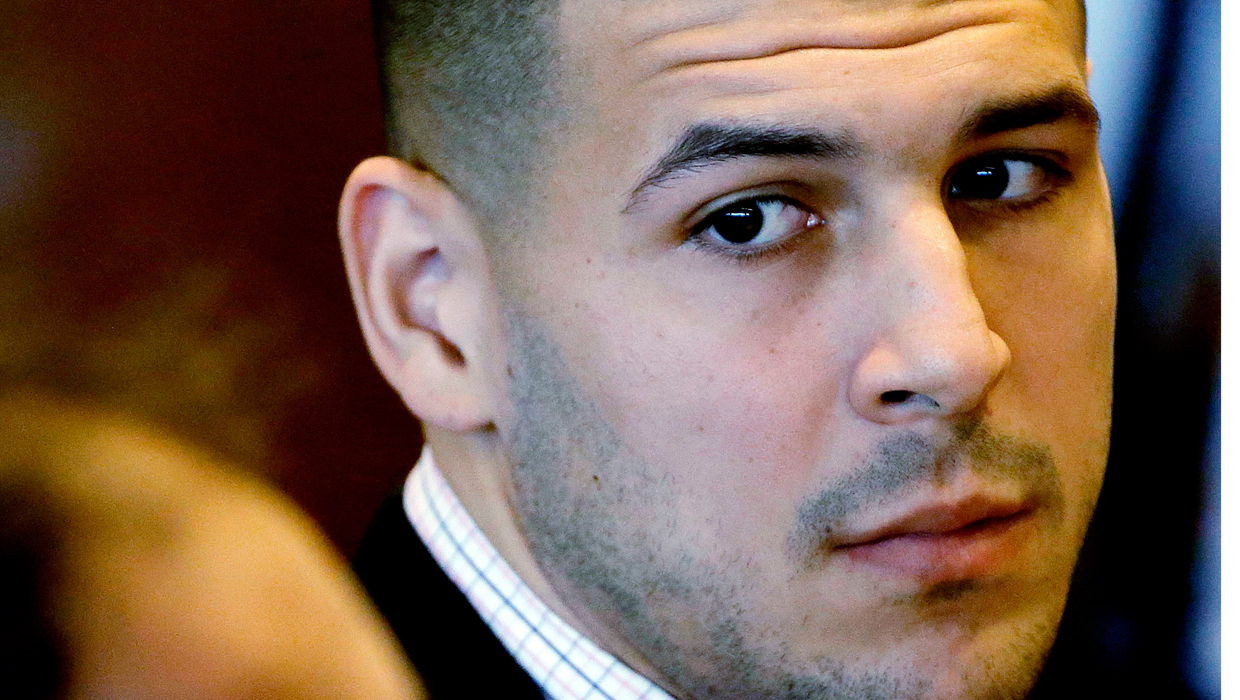 FALL RIVER, Mass. - The mother of the man former New England Patriots football star Aaron Hernandez is accused of killing was overcome with emotion Friday as a prosecutor showed the jury graphic photos of her son's body.

For a second straight day, Ursula Ward left the courtroom in tears as prosecutors in Hernandez's murder trial displayed photographs of her son Odin Lloyd's body. Lloyd was shown lying on his back with his left fist curled in a ball over the gunshot wounds to his chest.

Hernandez, 25, is charged in the 2013 shooting death of Lloyd, a 27-year-old semipro football player who was dating the sister of Hernandez's fiancee. Lloyd's bullet-riddled body was found in an industrial park near Hernandez's home, not far from Gillette Stadium, where the Patriots play.

Hernandez - who had a $40 million contract but was cut by the Patriots just hours after his arrest in Lloyd's slaying - could get life in prison if convicted. On Sunday, the Patriots will meet the Seattle Seahawks in the Super Bowl, which is the NFL championship and the biggest event in American television.

The judge overseeing the trial told jurors they can watch this weekend's big game but must walk away or otherwise distance themselves if Hernandez' name is mentioned.

The National Football League, which has been beset by domestic abuse scandals, could see New England Patriots coach Bill Belichick and team owner Robert Kraft called as witnesses in the trial.

The judge had cautioned jurors that the images would be graphic and that they shouldn't let their emotions sway them in the case.

Opening statements Thursday offered insights into the prosecution's case against Hernandez and the defense's strategy to prove his innocence.

He played footage that he said showed Lloyd getting into a Nissan Altima rental car driven by Hernandez, then video from the NFL player's home, taken shortly after Lloyd was killed, without Lloyd in the car.

Prosecutors say Hernandez and two of his friends drove Lloyd to the industrial park and shot him. The two friends are awaiting trial.

Defense attorney Michael Fee told the jury that Hernandez is an innocent man "targeted" by authorities for his celebrity.

Noting that Hernandez had long-term football contract, a new house, a fiancee and a 7-month-old baby, the defense attorney said Hernandez "was planning a future, not a murder."

In a separate murder case that has yet to come to trial, Hernandez was charged last year in Boston with killing two men in 2012 after someone spilled a drink on him at a nightclub. The judge has ruled that prosecutors in the Lloyd case cannot tell the jury about those slayings.