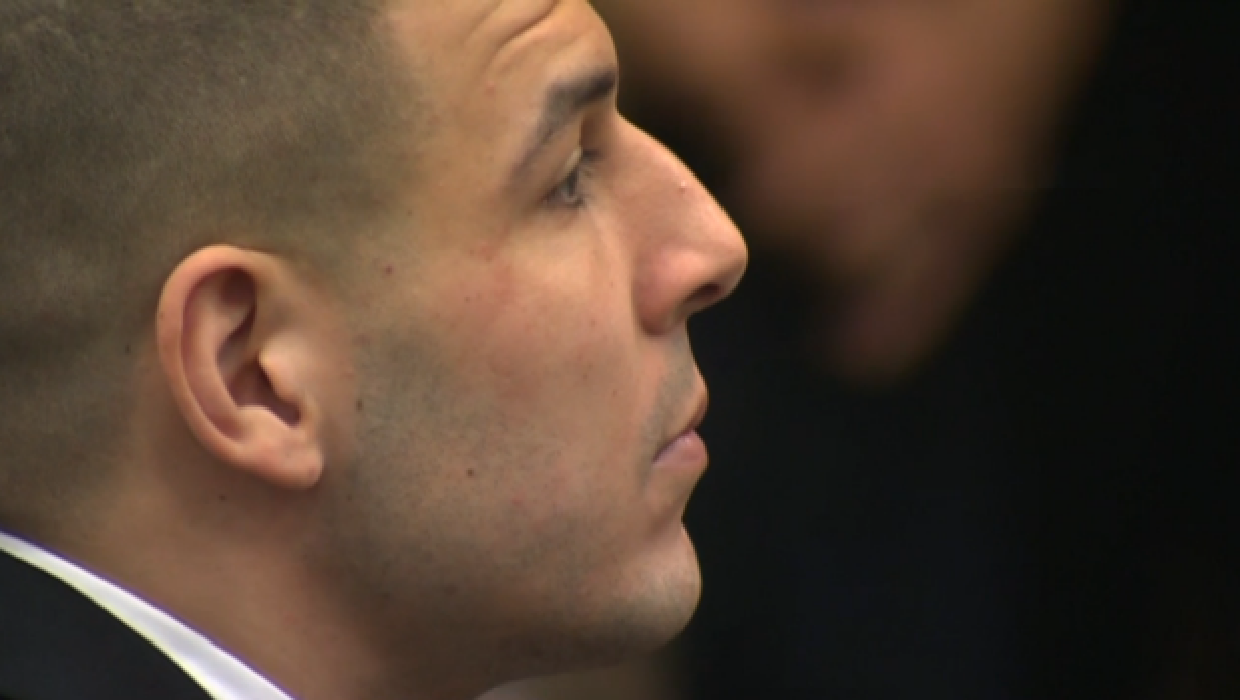 The former football star was arraigned on charges stemming from the 2012 murders of Daniel de Abreu, 29, and Safiro Furtado, 28, on Wednesday in Suffolk Superior Court and ordered held without bail. A third man was also wounded in the 2012 incident.

A family member of one of the victims sobbed loudly as Hernandez entered his not guilty plea to charges of first-degree murder, armed assault with intent to murder and assault and battery by means of a dangerous weapon.

During the arraignment, prosecutor Patrick Haggan said Hernandez told the court that the victims "had never crossed paths" with Hernandez before running into him while entering Cure Lounge in Boston's Theater District in the early hours of July 16, 2012.

"In fact, none of the victims recognized the defendant as someone they had seen before, either in person or otherwise," Haggan said.

The prosecutor said Hernandez and a friend stood at the edge of the dance floor after entering the club that night.

"Shortly thereafter, Daneil de Abreu, while dancing nearby, accidentally bumped into the defendant, causing the defendant's drink to partially spill. The defendant became angered and increasingly agitated, particularly after Mr. de Abreu smiled and did not apologize," Haggan said, adding that there was no argument or physical confrontation between de Abreu and Hernandez.

However, according to Haggan, Hernandez told his friend that he believed de Abreu deliberately bumped into him and was "trying him." That's when the friend convinced Hernandez to leave Cure Lounge and go to a nightclub across the street.

Haggan said that Hernandez believed de Abreu followed him to the second nightclub and was targeting and disrespecting him. However, according to Haggan, de Abreu remained at Cure Lounge.

When de Abreu and Furtado did eventually leave the club, Haggan said Hernandez followed them in an SUV and pulled up alongside them as their vehicle stopped at a red light.

Haggan said Hernandez leaned out the window and said, "Yo, what's up now?" and then a racial slur, before opening fire. He said Hernandez and a friend then drove off, taking the Massachusetts Turnpike to Hartford, Conn., where they stayed that night.

According to Haggan, Hernandez told his friend, "I think I got one in the head and one in the chest," as they drove away from the crime scene.

The day after the shooting, Hernandez searched the Internet and watched television to see whether there were any accounts of the deadly shooting, Haggan said. He also allegedly called his cousin, Tanya Singleton, to come and pick up the SUV, which had been loaned to him by a car dealership, and bring a new car for him to use.

The dealership attempted to track down the car, but according to Haggen, Hernandez ignored their requests to turn the car in.

On June 28, 2013, investigators found the SUV in Singleton's garage in Bristol, Conn. According to Haggen, the car was covered in cobwebs and had a dead battery. The weapon used in the shootings was also recovered last June from a woman with ties to Hernandez.

Singleton has since been indicted for criminal contempt of court stemming from her refusal to testify before the grand jury investigating the double murder.

In January, the Hartford Courant reported that a search warrant indicated that surveillance video showed Hernandez and a man named Alexander Bradley at the same nightclub in Boston as Furtado and de Abreu the night of their killings.

Bradley has a civil lawsuit pending against Hernandez, alleging that the former NFL player shot him in the face after they argued outside a Miami nightclub in early 2013. Bradley was jailed last fall after he allegedly avoided authorities who tried to subpoena him to appear before a grand jury probing the 2012 double homicide.

The search warrant obtained by the Courant sought to access recordings of phone calls Bradley made from prison after a Department of Corrections official told authorities that Bradley was heard discussing details of the Boston double homicide investigation on those calls.

After Haggan's statement, Hernandez's attorney Charles Rankin complained to Clerk Magistrate Gary Wilson that the jury pool will be tainted by prosecutors laying out the details of the murder case in front of a large group of media.

Hernandez was released by the Patriots last summer after his arrest in Odin Lloyd's shooting death.

Authorities have not said if they believe there is any connection between the 2012 killings and Lloyd's slaying, although the search warrant obtained by the Courant reportedly indicated the two incidents may have been related.

Lloyd's body was found in an industrial area near Hernandez's home in North Attleborough. Lloyd was dating a sister of Hernandez's fiancee.

Hernandez's lawyers have said he is looking forward to proving his innocence.