There's an opening at the Louvre that's become the talk of the food world. Here's David Turecamo, Our Man in Paris:

We know the French complain about a lot of stuff.

Because at the Louvre Museum they're going to open a McDonald's.

"No!!?!?" replied visitors outside the museum's iconic pyramid.

Well, it's actually going into the food court downstairs, which is already filled with quickie dishes from all over the world.

But someone like Bernard Hasquenof, who runs the Web site Louvre Pour Tous (Louvre For All), doesn't even consider McDonalds to be food.

"It's based on the way to run a military organization," he said.

Well, a lot of his countrymen might say, "Au contraire!"

Because, after the United States, France is the second largest consumer of McDonald's in the world today . . . tons of beef patties, tons and tons of french fries every year.

And they wouldn't be selling if the French weren't buying it.

"It's a victory after thirty years for McDonalds in France," said Hasquenof. "Being at the Louvre or any museum is a seal of approval for their business."

Well, everybody's got their own perspective. 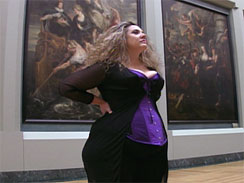 (CBS)
For instance, in this gallery filled with the works of the Flemish painter Peter Paul Rubens (you may recall ), these paintings hold a special appeal for Velvet d'Amour (left).

"The only thing they don't have is cellulite," she said.

Velvet's an American who's been living in Paris for 18 years. She's a successful model and photographer.

"I just tried to think of someplace I could find a positive image for my body type, and this was the only place."

Well, until the day she was eating a muffin in the Louvre's food court, and a group of Americans noticed her.

"And they were making fun of me, saying like, 'Oh, she really needs that muffin,'" Velvet recalled.

A little while later, while she was sitting in the gallery, "The same people came up to admire Rubens," she said. "And they were standing in front of it, they were, 'Aahhh, this is beautiful and amazing,' 'Look at the gorgeous lines. . . '"

"There's another person over there appreciating some art, a person of size," she said, pointing to another connoisseur. "Obviously we all love this room."

Thing is, obesity is on the rise in France. Almost 20% of children are overweight, and the number classified as obese has more than doubled in ten years.

Health professionals like Jean Paul Blanc say fast food is just one of the reasons. He says children today are less active, and blames accomplices in their more sedentary lifestyle: "Television, time spent in front of the screen, Playstation."

Ironic, because we've always been told the French (especially French women) can eat anything and never get fat.

But the traditional French meal has always been something shared and savored - portions are smaller, and meals are well-balanced.

But in a country hard hit by the recession, it's no wonder that sales at McDonald's were up 11% last year.

"It's practical, we get served quickly, and it's cheap," said one patron.

So McDonald's may only be a symbolic harbinger of a deeper problem in a modern world.

Obviously I would rather not have any McDonalds in all of France. I'm like many people running away from that culture.

But very soon now McDonald's is set open Outlet No. 1,135 in France.

Yep. Can you say "L'amburger"?