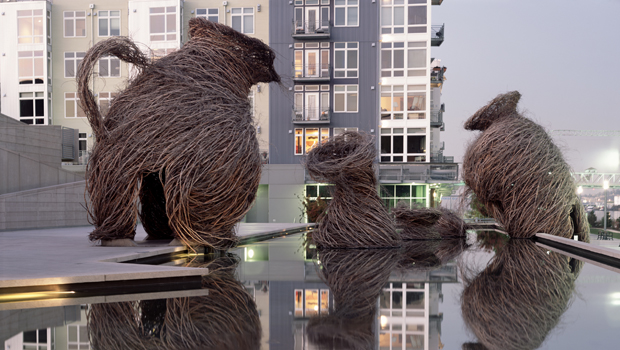 With sticks like these, we know an artist who's always BRANCHING OUT. With Anna Werner, let's go into the woods:

Deep in the North Carolina woods, a work crew looks like it's clearing underbrush, or gathering firewood. But they're actually collecting the raw materials to build something incredible: a forest king's castle, a hedge full of faces, a twisting maze -- all woven branch by branch, twig by twig.


They are the grand designs of sculptor Patrick Dougherty, also known as the "Stickman."

What feeling is he trying evoke in these passageways? "I want people to feel a sense of exploration," he said. "You know you're in another place and transported through the forest curtain back to the Garden of Eden."

Paradise found, for fans of all ages.

Kids love them ("Yesterday we were overwhelmed with children," he said), but so does the art world. Dougherty has won both the Henry Moore and National Endowment for the Arts Fellowships. He's even been the subject of a documentary, called "Bending Sticks."

In the film, by Penelope Maunsell and Kenny Dalsheimer, Dougherty said it takes about a tractor-trailer load of sticks to make a big piece. "Maybe that's six tons of sticks, I don't know -- that's a lot of sticks!"

His creations seem to have a universal appeal; they draw people in.

"I don't really feel like Patrick needs an interpreter for his work," said Linda Johnson, chief curator at the North Carolina Museum of Art. "And I think that is really the power of it, is that you don't need someone to explain it to you.

Werner caught up with Dougherty as he built the 256th of his creations -- what he calls, his "stickworks." It generally takes 21 days to build one.

He said this one, at the North Carolina Botanical Garden, "represents kind of three intersecting passageways that make a bit of a knot, in the tradition of a hedge knot garden. In this case, the hedges are big enough to walk through."

Here, as everywhere he goes, local volunteers come out of the woodwork to spend three intense weeks laboring by his side.

Asked how volunteers know what to do, Dougherty replied, "We've all been children. We just know everything to know about about sticks. It was our first building material."

It's like watching a barn-raising crossed with a giant game of pick-up sticks.

"Everyone's had that childhood experience of playing with sticks. And it didn't take that long to reignite those ultimate urges," he said.

At each installation, Dougherty acts not only as sculptor, but team coach for his volunteers ["Drop 'em back up underneath there. It doesn't work on the big ones, but on the little ones it'll work out pretty good"].

Werner asked, "Wouldn't it be a lot easier to just do all this yourself?"

"It would definitely not be as much fun," Dougherty laughed. "You know, we have people of every age. We could have the grandmother and the hippie and the biker chick and somebody all working together in a big crew. And that mix of people, it adds a lot to the energy of the sculpture."

You can't help but want to pick up a stick, and give it a try. He makes it sound so easy.

"This is the end you want to stick in the wall," he encourages. "There you go. That'll be good. Just push it on in there. Yep, twisting is good."

"You know, I didn't work out today, but now I don't have to!" said Werner. "And you do this how many times a day?"

"Thousands and thousands!" he laughed.

It's that kind of determination that has driven Dougherty to churn out nine mammoth stickworks each year, for nearly 30 years, all over the world.

"I've worked in the rain numerous times in Ireland and Scotland," he said, "and worked in the cold in Wisconsin, Denmark, Austria, Italy. And sometimes I have to use translators. But usually, sticks become the universal language."

The universal language of sticks . . . and love.

"Oh, I forgot that. Yep, my wife and I, we met through sculpture," he said.

His wife, museum curator Linda Johnson Dougherty, said it was love at first sight. She's watched him pick up sticks for 22 years.

When asked if there is a work that's particularly close to your heart," Linda replied, "There is a beautiful piece that he did that looks like Bramante's Tempietto. It's like this little classical temple made out of sticks. And I wanted him to make me one at home. And he hasn't done it!" she laughed.

Like wives everywhere, her project is at the bottom of a very long to-do list. Dougherty is booked through the next two years. "We get offers every day," he said.

The kind of offers that museums make for original works of art to keep in their permanent collections is something they'll never be able to do with Dougherty's works. They only last a couple of years.

And, Dougherty says, that's part of the point.

"There's a way that you look at this work and care about it and care for it knowing that it's not going to exist, " he said, 'cause you know what's gonna happen to sticks. I mean, you see a stick and you kind of know that it's like a leaf. It's gonna break down. Something's gonna happen. It's gonna blow away. But in a sense the most powerful part of it is that it's not lasting. And we all recognize that we have a limited lifespan ourselves."

"Does it pain you as an artist to see it deteriorate?" Werner asked.

He replied, "It doesn't currently, 'cause I'm working on a new piece, you know? So I'm already on to the next piece."

Art history, says Dougherty, "has to look after itself," whereas artists "should just make what they want to make."

"Sex and the City" author Candace Bushnell's next chapter
Thanks for reading CBS NEWS.
Create your free account or log in
for more features.
View CBS News In
CBS News App Open
Chrome Safari Continue
Be the first to know
Get browser notifications for breaking news, live events, and exclusive reporting.