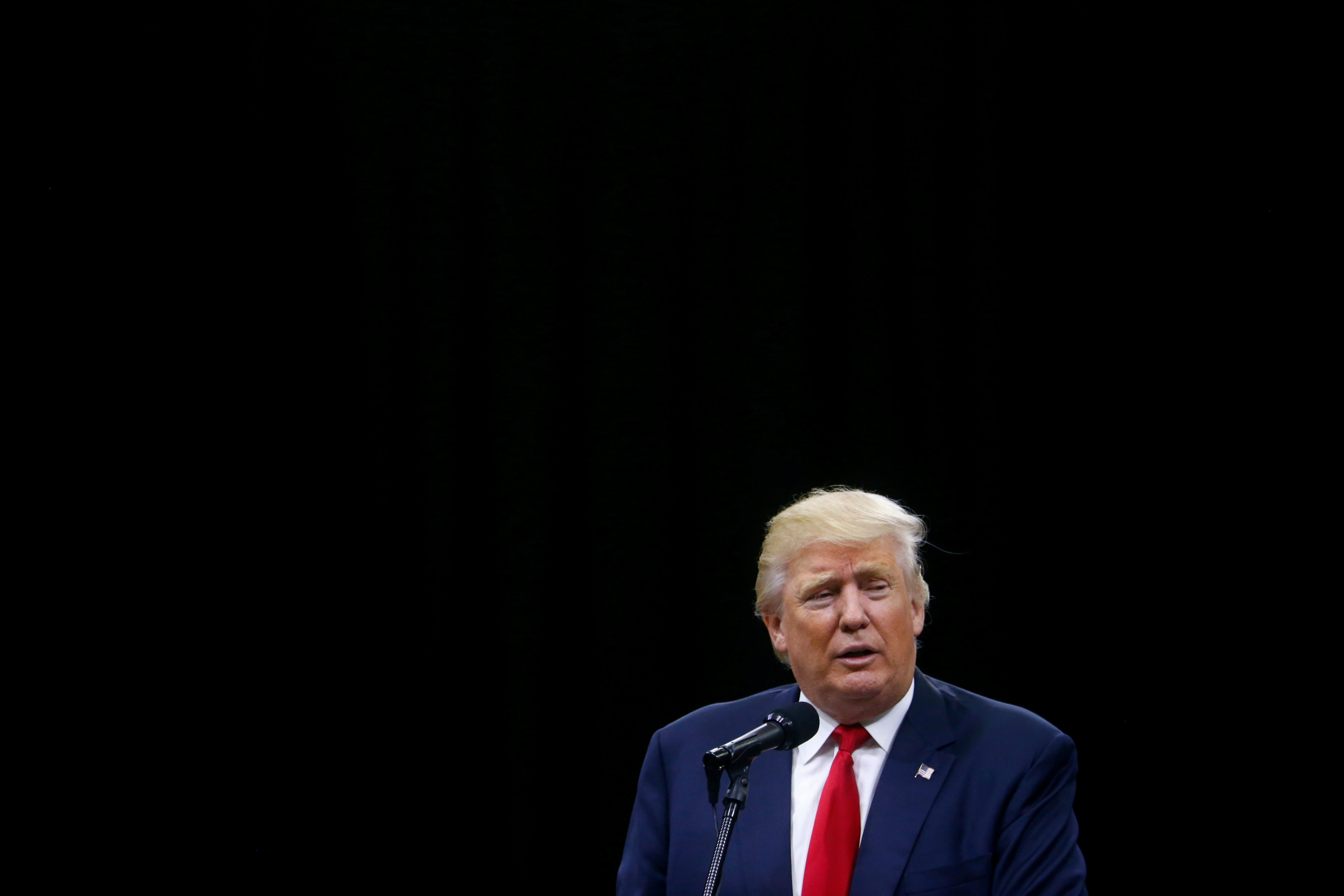 Like any cultural phenomenon, Donald Trump's campaign for president brings its own folklore. And for Trump, that folklore mainly involves conspiracy theories that explain away all his self-inflicted wounds.

Down in the polls, Trump still shows no signs of becoming "presidential," and he has immersed himself in lengthy, self-harming feuds with the Khan family and Republican elected officials like Paul Ryan and John McCain. He insists he doesn't need the GOP to unite behind him, and has acted accordingly, often going out of his way to alienate old rivals like Ted Cruz, who he still called "lyin' Ted" after the primaries were over.

But it goes beyond that. When candidates make a misstep, they usually try to excuse the incident and move on. Yet Trump, at seemingly every opportunity, attempts to keep bad stories about him alive, such as when he spent a week defending his praise of Saddam Hussein.

Or how he's made his fight with the Khans, a "Gold Star" family, the story of the week even as Hillary Clinton came under fire for insisting on Sunday that FBI director James Comey said she had told the complete truth about her emails. (He said no such thing.)

It's all behavior we don't typically expect from someone who is trying to become president of the United States, which brings us to Trump conspiracy theory number one...

He has no intention of becoming president

It's a theory as old as the campaign itself: Donald Trump has no intention of becoming president, and this has all been a glorified public relations endeavor.

"I can't imagine that he wants to be president," MSNBC's Rachel Maddow told Jimmy Fallon last August. "I'm not even convinced he really wants the job," Tucker Carlson wrote in a January piece for Politico. "He's smart enough to know it would be tough for him to govern."

Carlson and Maddow aren't alone in their suspicions. Occidental College professor Peter Drier wrote for the Huffington Post in October that Trump was "scared sh*tless" that he might win the Republican nomination. "Trump goes to sleep at night both excited about the next day's media attention and worried that he might actually win, but unsure how to get out of the bind he now finds himself in," he wrote.

Perhaps the most famous encapsulation of this theory came from Stephanie Cegielski, a one-time strategist for a pro-Tump super PAC. "He doesn't want the White House," she wrote in an "open letter" to Trump supporters on the website XOJane. "He just wants to be able to say that he could have run the White House. He's achieved that already and then some. If there is any question, take it from someone who was recruited to help the candidate succeed, and initially very much wanted him to do so."

Here's the rub with this theory: Cegielski worked for a PAC that Trump never gave his blessing to, so her insinuations that she was a campaign insider (XOJane referred to her as a "top strategist" for the candidate) are likely false. Trump never wanting to be president is a matter of pure speculation, and one that might not make the most sense.

If Trump were trying to improve his standing in the public eye, he's failed, becoming the most unpopular major party nominee in history. It's also hurt his businesses, which have been the target of boycotts and are now forever saddled with their association to a man many see a racist demagogue.

On the other hand, Trump does now have a true die-hard political following, which could turn to an audience and/or consumer base for whatever he does next. To that point, Vanity Fair reported in June that Trump is toying with the idea of creating his own news network. His campaign spokesperson, Hope Hicks, adamantly denied that the mogul was considering anything like that, but with Fox News in the midst of Roger Ailes' chaotic exit, there might be room for a Trump network should he lose in November.

But perhaps that's not a good enough reason to not want to be president. Maybe, the thinking goes, he made a deal with someone to run and implode. That brings us to theory number two...

He cut a deal with the Clintons

This theory has the strange benefit of being floated by Jeb Bush, a scion of the GOP's most prominent dynasty and one of Trump's erstwhile primary opponents.

The guiding principle of this theory: if you wanted to destroy the Republican Party from the inside, would you do anything differently than what Trump has done? He's divided conservatives. He's alienated large and growing demographic groups. And every time Hillary has a bad day, in comes Trump to steal the spotlight.

Jeb's tweet prompted a run-down of the theory in The Washington Post last December, while the tweet itself was in response to a characteristically odd boast from Trump that, should he run as an independent, most of his supporters would leave the GOP and follow him.

That obviously didn't turn out to be necessary, though the theory still has its compelling points. For starters, Trump used to be a Democrat, and has a personal relationship with the Clintons, who attended his wedding in 2005. (Trump has repeatedly said they came because he had bought them off.)

Moreover, Trump was a Democrat until fairly recently (2009, to be exact) although he spent the George W. Bush years as a Republican. He's also repeatedly praised both Clintons over the last decade.

Last August, this "false flag" theory was explored in depth by Gawker, which pointed to AntiWar.com proprietor Justin Raimondo as the originator of the idea.

In a blog post written just weeks after Trump announced, Raimondo argued at length that "[Trump's] ties to the Clintons, his past pronouncements which are in such blatant contradiction to his current fulminations, and the cries of joy from the Clintonian gallery and the media (or do I repeat myself) all point to a single conclusion: the Trump campaign is a Democratic wrecking operation aimed straight at the GOP's base."

Raimondo has since written approvingly of Trump and praised him on Twitter, indicating that he may no longer subscribe to this theory. But for those who still think Trump might be in cahoots with the Clintons, the magic bullet is a phone call Bill Clinton placed to the mogul in May 2015.

"Four Trump allies and one Clinton associate familiar with the exchange said that Clinton encouraged Trump's efforts to play a larger role in the Republican Party and offered his own views of the political landscape," the Post reported last August. Clinton was also reported to have been "upbeat and encouraging" during the call, in which he "analyzed Trump's prospects and his desire to rouse the GOP base."

That's enough to raise a few eyebrows. The question is, now that Trump has become the most polarizing figure in America, what has he to gain from throwing the fight? What could the Clintons give him after painting him as an unstable racist maniac?

Maybe Trump made a deal with a guy with deeper pockets and absolute power, which brings us to theory number three...

It's strange, isn't it, that the Republican nominee has such evident affection for Vladimir Putin? In speech after speech, Trump has made it clear that better relations with Moscow would be a central tenet of his foreign policy. And for its part, Russia's propaganda organs have returned the favor.

RT America, the Kremlin-funded English cable news service, has adopted a decidedly pro-Trump party line over the last year. As Politico reported in May, the network portrays him as a "foreign policy savant" who wisely realizes that NATO has outlived its mission and Putin has gotten a bad rap. The journalist Adrian Chen, meanwhile, has reported that much of Russia's "army of well-paid trolls" on the internet became, at some point, Trump backers.

"I don't know what's going on, but they're all tweeting about Donald Trump and stuff," Chen said on a podcast in December, according to Business Insider.

All that was before the Democratic National Committee hack, which many believe to be the work of Russia's intelligence agencies. Clinton campaign manager Robby Mook, for one, has said Moscow was behind the embarrassing release of emails via WikiLeaks that cost a Clinton ally her job running the DNC.

But it doesn't stop there. The last job top Trump aide Paul Manafort held down was a gig advising Viktor Yanukovych, the Putinite president of Ukraine who was toppled by pro-Western demonstrators in 2014. And Trump has had plenty of business dealings with Russian investors, prompting Donald Trump Jr. to tell a real estate conference in 2008 "Russians make up a pretty disproportionate cross-section of a lot of our assets."

Trump has said on Twitter and in his speeches that this is all ridiculous, even as he brags that Putin likes him.

It's worth noting that the Clintons have had their share of shady deals with Putin-linked figures over the past few years, most notably one involving the Russian takeover of a Canadian uranium company. Still, it's hard to dismiss the idea that the Kremlin has a vested interest in seeing Trump elected, given his praise for Putin, suspicions about NATO, and apparent business interests in Russia.

Then again, Trump is probably not a full-blown Manchurian candidate, or someone who embarked on an enormously expensive presidential campaign just so he could get in better with Putin.

Perhaps Trump's behavior has an easier explanation: he's tired of the campaign and looking for an exit. So here we are, with conspiracy theory number four...

"ABC News has learned that senior party officials are so frustrated -- and confused -- by Donald Trump's erratic behavior that they are exploring how to replace him on the ballot if he drops out," ABC's Jon Karl reported on Wednesday.

Here's the thing, though: there's nothing to explore, as the party's Rule No. 9 pretty concretely lays out what happens if there's a vacancy. (In broad strokes, RNC members would choose a replacement nominee by voting for a new one on a state-by-state basis.)

But that only kicks in if Trump dies or Trump drops out. What are the chances he drops out, then? Probably nil, considering the enormous time and effort he's already put into the race, and what we know about him as a person. He can't just fold up and leave at this point; doing so would look weak, and Trump's whole worldview is predicated on the need to look strong. Trump's staying put, folks.

Then how do we explain what Trump is doing?

Chances are it's all quite simple: Trump is an eccentric making eccentric decisions, and he's confident that they'll somehow work because they've worked in the past.

Yes, his connections with Russia are peculiar (the only real comparison in this regard would be with the fellow-traveling fiasco that was Henry Wallace's 1948 run for president). Yes, his relationship with the Clintons is at the very least complex. But as is the case with most things, the simplest explanation is also the likeliest, and that's that Trump is just being Trump, for better or worse.