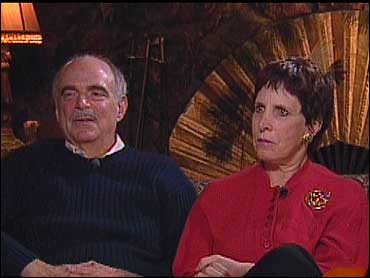 "The whole thing's a bad dream," said Susan Levy, reflecting on the agonizingly long eight years since the death of her daughter, whose murder may finally have been solved.

For Susan and Robert Levy, their nightmare began in May 2001, when their daughter, 24-year-old Chandra Levy, a 24-year-old government intern, vanished from her Washington, D.C. apartment.

Complicating the search was a shocking revelation that Chandra was having an affair with a married congressman, Gary Condit.

Her remains were found in a Washington, D.C. park the following year. Now, eight years after her death, her mother said the sudden news late Friday that police planned to arrest a Salvadoran immigrant in the slaying may resolve the crime, but it will do nothing to stem her family's heartache.

Robert and Susan Levy said news of the imminent arrest does not quite seem "real" to them yet, because it has been so long, and they are angry at the way police have handled the investigation.

In an interview at their Modesto, Calif., home with The Early Show anchor Harry Smith, Robert Levy said that the police lost sight of Chandra's killer because of the attention being paid to Condit. "They knew about this other guy," he said.

The "other guy" being Ingmar Guandique, 27, a man already in a federal prison in Adelanto, California, for two assaults in Rock Creek Park. Those assaults happened the same time Chandra disappeared, and close to where her remains were found. And yet the case, officially, went cold.

"It seems incredible, in retrospect, that here he assaults two different women in basically the same, exact spot. How can they not put that together somehow?" Smith asked.

(CBS)
(Chandra Levy was a government intern who disappeared in 2001. Her remains were found in a Washington, D.C. park a year later.)

D.C. police spokesman Officer Quintin Peterson told the Associate Press Sunday that he could not comment on the investigation.

An inmate serving time with Guandique reportedly told investigators that Guandique told him he killed Levy, but Guandique is said to have told police he saw Levy in the park, but didn't harm her.

Avis Buchanan, director of the Washington, D.C., Public Defender Service, said in an e-mail that her office is still representing Gaundique, but the lawyer who was previously assigned to him is no longer with the office.

Guandique's arrest, according to numerous published reports, is now imminent. Facing him in court is something the Levys both welcome … and dread.

"Would you go to the trial?" Smith asked.

Susan said she probably would. "I'll probably go," said Robert, "but I really don't want to."

"It's pretty hard," Susan said, who said the latest news fills her with feelings of sorrow and sadness. "I mean, it's bittersweet to find that there's going to be a warrant served, but sadness because the sentence we have as parents is life without our daughter," she told Smith.

While they look to the perpetrator for blame, they both also express anger toward former congressman Condit and his relationship with their daughter.

(AP)
(Left: Former Democratic Congressmen Gary Condit of California denied complicity in Levy's disappearance or death, but news of an affair with the 24-year-old ended his political career.)

"We didn't appreciate that relationship," Robert said. "You know, that was definitely not a good thing, I can say that for sure. But we don't want to say anything more about it."

"Do you feel like he took advantage of her?" Smith asked.

Robert and Susan Levy still have photos of Chandra throughout their house and the memories remain quite strong.

"Has there been a normal day in this house since May of 2001?" Smith asked.

"Not really," Robert said. "Without Chandra, it's never really normal."

Susan added, "It's a void. It's definitely a void."

Susan said she may never get closure, but what she wants right now more than anything is justice.

In the first weeks after her daughter disappeared and became a media sensation, grief hit Susan Levy so hard she could not move from a fetal position on the living room couch.

After authorities questioned Condit in the disappearance and revealed his affair with Chandra, media from around the world descended on the family's split-level home amid the orchards of Modesto, a sleepy city 90 miles east of San Francisco.

Susan, Robert and their son Adam retreated, and drew the blinds hoping to cope with their anguish in peace.

By the time Chandra's remains were found a year later, her mother had found enough strength to dial Washington police detectives to ask why it was taking so long to find her daughter's killer.

"Grief is like a marathon," Susan Levy said. "You don't get over it. It recycles itself."

Bit by bit, Susan emerged with the help of another mother, Donna Raley, and other friends, and started leaving the house to practice yoga or ride her horses, anything to escape the television trucks parked in two single-file lines along their cul-de-sac.

"She was somber, she was almost in a fetal position on that couch. I told her I, too, had lost a child and we sat and cried," Raley said. "I said she could either let whoever took her daughter take her and her marriage, too, or she could stand tall and fight back."

Only a year after Chandra's disappearance on May 1, 2001, she and Raley founded a nonprofit advocacy group called Wings of Protection to help family members of violent crime victims who are missing.

Then, after bungled searches by the D.C. police, came the news that a dog walker had discovered Chandra's remains under the forest canopy of Rock Creek Park in May 2002.

The family's hopes that she might still be alive were extinguished.

"We used to hope for her to have a happy life, and a fulfilling career," said her father Bob Levy, an oncologist. "We started praying for her to be reincarnated."

Hobbled by pain, the couple explored Buddhism, Hinduism and Christianity, and Chandra's father began keeping a log of signs that his daughter's spirit was present - small things, such as a rainbow after a storm, or her godmother's dream that Chandra wanted to send her parents a message.

They also looked for solace in Modesto's close-knit Jewish community, he said.

Each Yom Kippur, the holiest day in the Jewish calendar, they would pray at Congregation Beth Shalom for those who had passed. And each year, the congregation would light a candle in Chandra's name and bring out a special, small Torah donated by the Levys, a collection of sacred scrolls of Hebrew Scriptures smuggled out of Germany during the Holocaust.

"We all call it the Levy Torah, and everyone feels it's an honor to hold it because it's a reminder of the recent death of Chandra," said Joyce Gandelman, a leader at the synagogue who sings with Susan in the choir. "She hasn't left Modesto. Chandra's spirit is still here."

Photos of the young intern adorn the home where she grew up.

Her parents still take sleeping pills sometimes to get through the night, though her mother said therapy has been of some help.

But as with many families struggling with the slow course of the justice system, the Levys have been largely left alone to work through their unanswered questions.

"I was hoping the detectives would call once a month and I would get an update," Susan Levy said. "But it's probably, 3, 4, 5 months and you don't hear anything from them."

"For a minute there, I felt energized and ecstatic hearing that a warrant would be served, just knowing that someone is doing something, that they hadn't forgotten about me," Susan Levy said.

Family friend Pat Hall's eyes lit up when she was told there was a break in the case.

"It was tough, hard not knowing anything, not having any answers," she said. "We all had our suspicions, which obviously were wrong, and it cost Congressman Condit his job."

The Levys won't talk about Condit. The former Democratic congressman from Ceres, Calif., put out a statement after the news reports surfaced that Washington police were preparing an arrest warrant for Guandique.

"For the Levy family, we are glad they are finally getting the answers they deserve," Condit said in a statement to the Washington television station WJLA. "For my family, I am glad that their years of standing together in the face of such adversity have finally led to the truth."

Saturday, after hours of interviews, an exhausted Susan Levy said she was doing all she could to honor her daughter's passion for justice and law enforcement.

"We are just one family that has gone through this. How many other families have cold cases that are unsolved and are still looking for answers?" she said. "This is bittersweet. I still don't know if justice will be done."