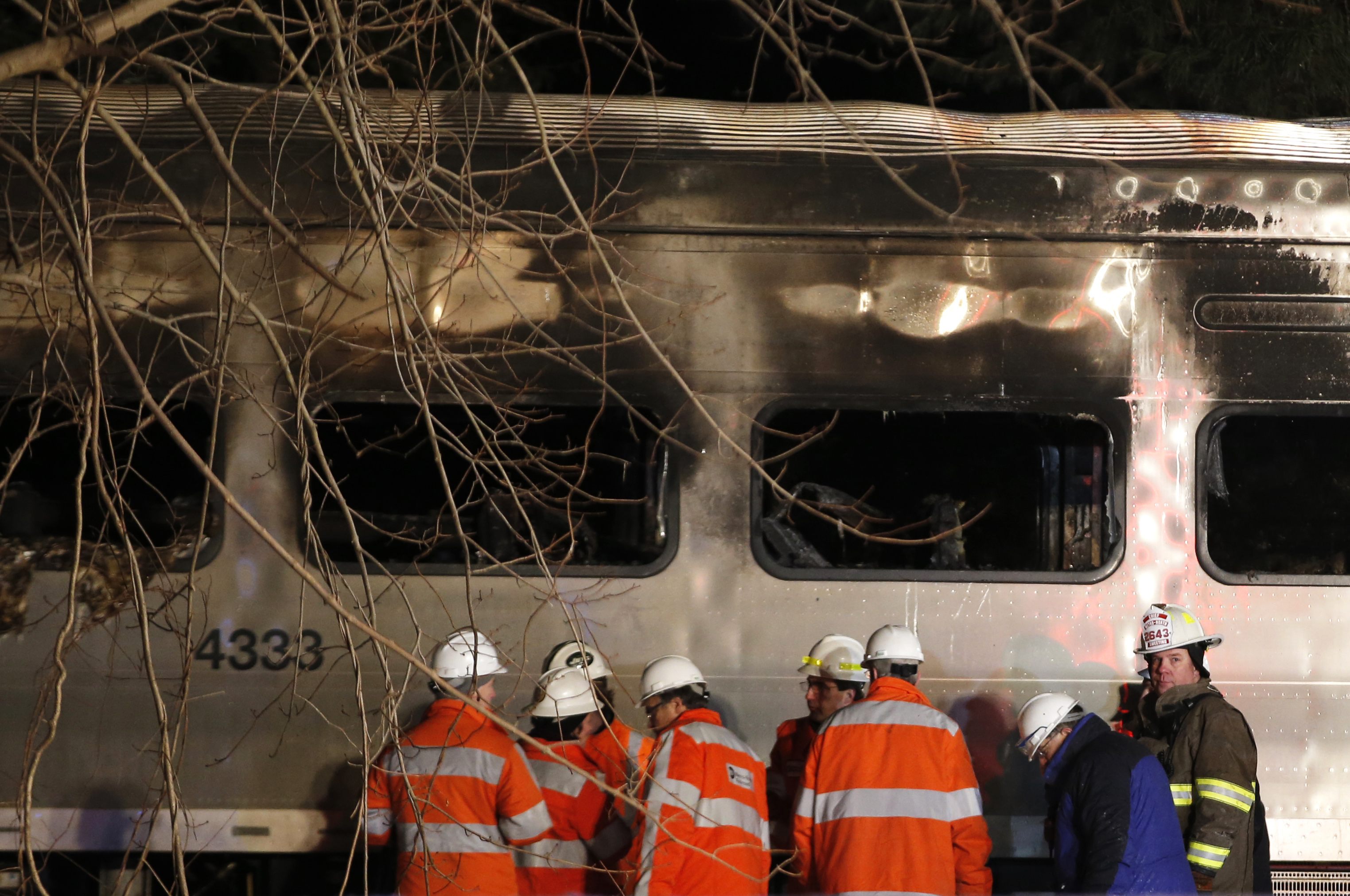 The collision involving a Metro-North Railroad train and a Jeep Cherokee Tuesday evening in Valhalla, about 20 miles north of New York City, sent hundreds of passengers scrambling to get to safety. Authorities said the impact was so forceful the electrified third rail came up and pierced the floor of the train.

On "CBS This Morning" Wednesday, Gov. Andrew Cuomo said five people aboard the train and the SUV's driver were killed in the crash. Cuomo said the death toll had decreased from seven overnight.

"I am amazed anyone got off that train alive. ... It must have been pure panic, with the flames, the third rail and the smoke," he said.

Astorino said 12 people were injured, 10 of them seriously.

Metropolitan Transportation Authority President Thomas Prendergast said the train's engineer was among the injured, but survived.

Authorities said the SUV's driver had gotten out of her vehicle momentarily after the crossing's safety gates came down around her. She then got back in and was trying to drive forward when she was hit, they said.

All railroad grade crossings have gate arms that are designed to lift automatically if they strike something like a car on the way down, railroad safety consultant Grady Cothen said. The arms are made of wood and are designed to be easily broken if a car trapped between them moves forward or backward, he said.

Officials didn't comment on whether the gates were working properly. The National Transportation Safety Board said a team was being sent to investigate.

One possibility investigators will be looking into is whether an accident on a nearby highway led drivers to an alternate route, which led to congestion, and whether the woman behind the wheel of the SUV was caught in traffic near the train tracks, reports CBS News correspondent Vinita Nair.

The northbound Metro-North Railroad train left Grand Central Terminal in Manhattan around 5:45 p.m. and struck the SUV about 45 minutes later.

It was unclear how fast the train was going, but the maximum speed would be 60 mph, a railroad official said.

The train shoved the SUV about 10 train car lengths. Smoke poured out of the scorched front rail car, its windows blackened.

"This is a truly ugly and brutal site," Cuomo said.

Witnesses said they saw the flames shooting from where the crash occurred, in a wooded area near a cemetery.

The charred SUV was left wedged under the train, reports CBS New York.

Ryan Cottrell, assistant director at a nearby rock climbing gym, said he had been looking out a window because of an earlier, unrelated car accident and saw the train hit the car, pushing it along.

Passengers described a bump and said they smelled gasoline from the vehicle.

Around 650 passengers likely were aboard the train, including Justin Kaback, commuting home to Danbury, Connecticut.

Many were moved to the rear of the train so they could get off. Buses picked them up and took them to other stations.

Two men from New Fairfield, Connecticut, Ray Pierce and Matt Lucas, told CBS New York they were anxious to get home and were grateful to have survived unscathed.

They said they felt something they described as a thud, followed by a relatively quick deceleration of the train.

"I was in the third car. We hit a bump. It felt like went over a crossing -- nothing really big," Lucas said. "The train kind of came to a quick stop, and it was kind of quiet for a while."

But passengers quickly realized something was seriously wrong.

"The train came to an abrupt halt," Sally Barton, of Putnam County, New York, told CBS New York. "We weren't getting any information, but we knew that something bad was going on because there were lots of police cars, firemen, et cetera."

At one point, an announcement was made that a train had hit a vehicle, and everyone was told to evacuate, passengers told CBS New York. Most passengers remained calm, but some did panic - particularly as word spread of serious injuries and perhaps even deaths, they said.

Passenger Dan Soloway described a terrifying experience to CBS New York, saying, "The train came to a pretty good halt - like, I wouldn't say a slap on the brakes, but pretty abrupt stop. And the first thing I noticed was there was an aroma, as if there potentially could have been a mechanical malfunction.

"I was sitting in the last car, so there was no jolt from impact, and after a few minutes at like 6:30, there was an announcement that there was a car that was struck."

Soloway said the train crew came through the entire train asking if anyone was injured, and it soon became evident that the situation was extremely serious.

As passengers exited the train, one shot cellphone video, and many saw flames and smoke as they counted their blessings.

"You get out of the train. It's freezing cold out, and then you realize how fortunate you are," Pearce remarked to CBS New York, "because it could be a lot worse than having to walk up here a couple miles in the cold."

Metro-North is the nation's second-busiest railroad, after the Long Island Rail Road. It was formed in 1983 and serves about 280,000 riders a day in New York and Connecticut. Service on its Harlem Line was suspended between Pleasantville and North White Plains after the crash.

Metro-North has been criticized severely for accidents over the last couple of years. Late last year, the NTSB issued rulings on five accidents that occurred in New York and Connecticut in 2013 and 2014, repeatedly finding fault with the railroad while also noting that conditions have improved.

U.S. Sen. Richard Blumenthal, D-Connecticut, a strong critic of Metro-North, said the Valhalla accident is more evidence of the need for better safety.