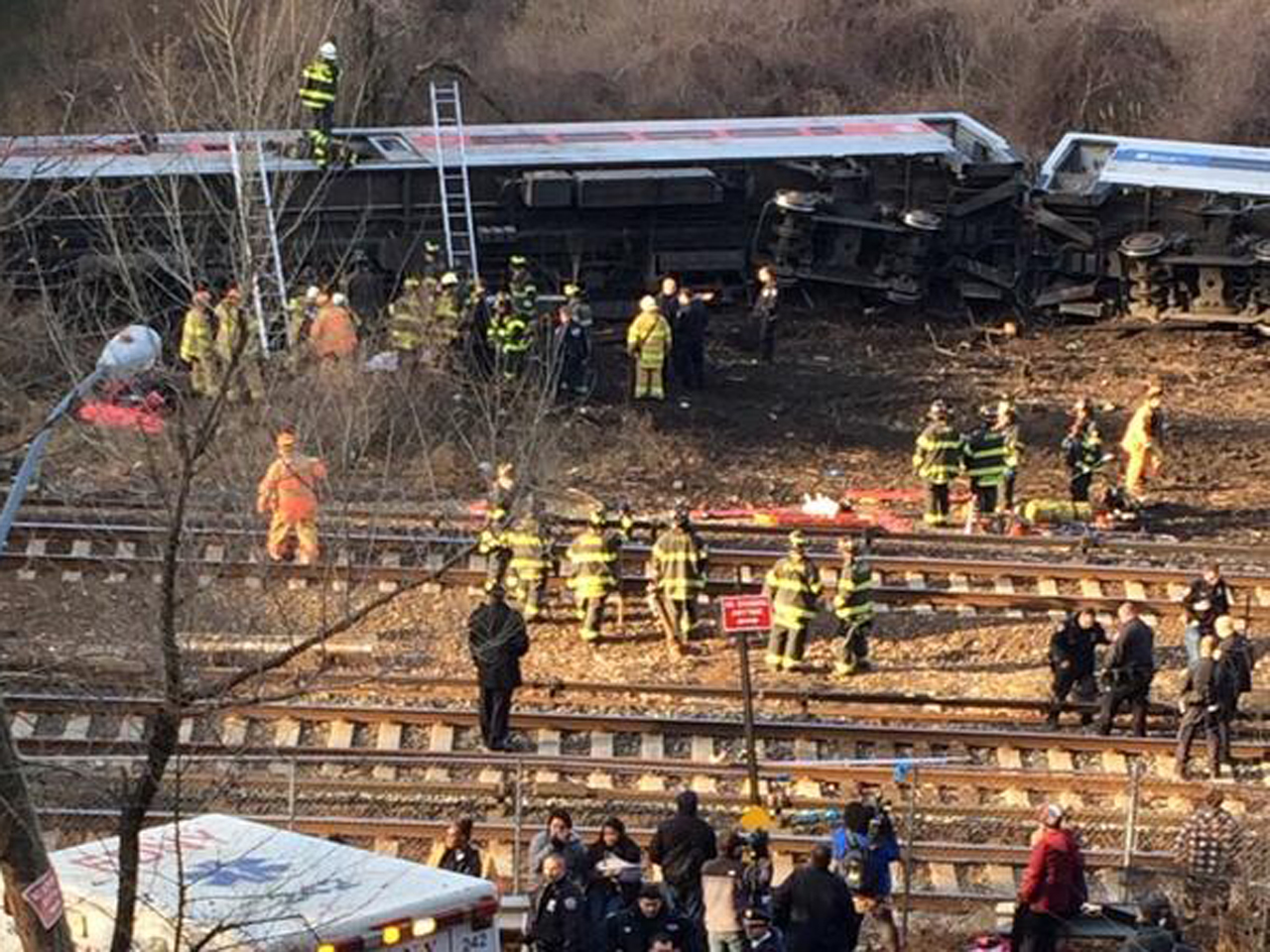 NEW YORK - A New York City commuter train rounding a riverside curve derailed Sunday, killing four people and injuring more than 60 in a crash that threw some riders from toppling cars and raised questions about whether excessive speed, mechanical problems or human error could have played a role.

Some of the roughly 150 passengers on the early morning Metro-North train from suburban Poughkeepsie to Manhattan were jolted awake around 7:20 a.m. to screams and the frightening sensation of their compartment rolling over on a bend where the Hudson and Harlem rivers meet in the Bronx.

All of the train’s seven cars came off the track about 100 feet north of the Spuyten Duyvil station around 7:20 a.m., officials said.The incident is just the latest example of this year's troubles for the second-biggest U.S. commuter railroad.

Three of the dead were found outside the train, and one was found inside, authorities said. MTA police identified the victims as  Donna L. Smith, 54, of Newburgh, N.Y.; James G. Lovell, 58, of Cold Spring, N.Y.; James M. Ferrari, 59, of Montrose, N.Y.; and Ahn Kisook, 35, from the New York City borough of Queens.

Fire officials said 11 of the more than 60 people injured were critically wounded, but New York Mayor Michael Bloomberg said late Sunday that none of their injuries was believed to be life-threatening.

In their efforts to find passengers, rescuers shattered windows, searched nearby woods and waters and used pneumatic jacks and air bags to peer under wreckage. Crews planned to bring in cranes during the night to right the overturned cars on the slight chance anyone might still be underneath, National Transportation Safety Board member Earl Weener said.

Th e agency was just beginning its search into what caused the derailment, and Weener said investigators had not yet spoken to the train engineer, William Rockefeller, who was among the injured.

But law enforcement sources said that Rockefeller, in spontaneous comments made to first responders, said he applied the brakes as the train rounded the curve but the brakes did not work.

Cuomo said the track did not appear to be faulty, leaving speed as a possible culprit for the crash, but he noted that the National Transportation Safety Board would determine what happened.

Metropolitan Transportation Authority Chairman Thomas F. Prendergast said investigators would look at numerous factors, including the train, the track and signal system, the operators and speed.

The speed limit on the curve is 30 mph, compared with 70 mph in the area before the curve, MTA spokeswoman Marjorie Anders said.

Several injured passengers told both WCBS New York and The Associated Press that the train seemed to be going too fast as it took the curve near the Spuyten Duyvil station. The station's name comes from a Dutch word for a local waterway, sometimes translated as "Devil's whirlpool."

Investigators did not know how fast the train was traveling but said they had recovered a data recorder.

Authorities were trying to determine whether everyone on the train had been accounted for. Unlike an aircraft, with an airtight manifest that lists everyone on the plane once the doors closed, trains are harder to track. People get on and off and not everyone who bought a ticket ends up on board. A review of computer records on ticket sales and stubs from the conductor will be used to build a complete witness list.

While some passengers were headed to work, others aboard the train were probably going to New York for holiday shopping - and many more might have joined them had the train been later in the morning.

Joel Zaritsky was dozing as he traveled to the city for a dental convention.

"I woke up when the car started rolling several times. Then I saw the gravel coming at me, and I heard people screaming," he told The Associated Press, holding his bloody right hand. "There was smoke everywhere and debris. People were thrown to the other side of the train."

Nearby residents awoke to a building-shaking boom. Angel Gonzalez was in bed in his high-rise apartment overlooking the rail curve when he heard the roar.

"I thought it was a plane that crashed," he said.

Mike Gallo heard the same noise as he was walking his dog. He looked down at the tracks and "knew it was a tragedy right away. I saw injured people climbing out of the train."

Within minutes, dozens of emergency crews arrived and carried passengers away on stretchers, some wearing neck braces. Firefighters shattered windows of the toppled train cars to reach injured passengers.

Dazed passengers were given ice to apply to their wounds, and in some cases, bodies covered with yellow blankets could be seen.

Passengers were taken off the derailed train, with dozens of them bloodied and scratched, holding ice packs to their heads.

Edwin Valero was in an apartment building above the accident. At first, he said, he didn't notice that the train had flipped over.

"I didn't realize it had been turned over until I saw a firefighter walking on the window," he said.

Amtrak Empire service was halted between New York City and Albany after the derailment, although it later resumed at slower speeds, the company said in a statement. Amtrak said its Northeast Corridor service between Boston and Washington was unaffected.

When the NTSB gives the go-ahead, the MTA will begin efforts to restore service, Prendergast said. Meanwhile, thousands of people braced for a complicated Monday morning commute, with shuttle buses ferrying passengers to another line.

President Barack Obama said his thoughts and prayers are with the friends and families of the victims of the train derailment.

Sunday's accident is the second passenger train derailment in six months for the rail service.

On May 17, an eastbound train derailed in Bridgeport, Conn., and was struck by a westbound train. The crash injured 73 passengers, two engineers and a conductor. Eleven days later, track foreman Robert Luden was struck and killed by a train in West Haven, Conn.

In July, a freight train full of garbage derailed while using a Metro-North line, and this fall service on Metro-North's line between New York City and Connecticut was hobbled for days after a high-voltage feeder line failed.