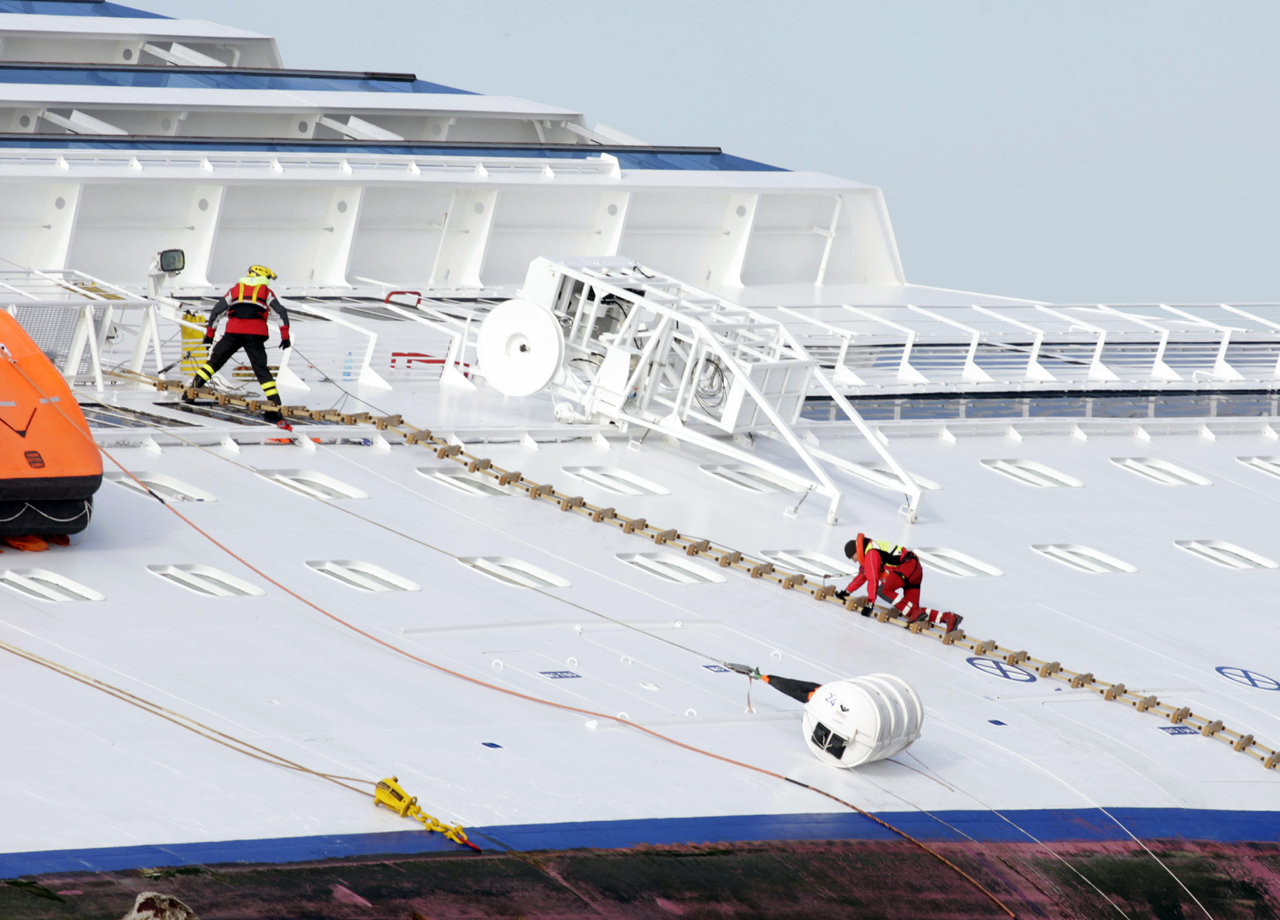 GIGLIO, Italy (AP) — A helicopter on Sunday airlifted a third survivor from the capsized hulk of a luxury cruise ship 36 hours after it ran aground off the Italian coast, as prosecutors confirmed they were investigating the captain for manslaughter charges and abandoning the ship.

Authorities reduced to 17 the number of people still unaccounted for, as an Italian who worked in cabin service was pulled from the wreckage of the Costa Concordia. He was the third survivor to be found, after a South Korean couple on their honeymoon were rescued late Saturday in the unsubmerged part of the ship when firefighters heard their screams. They were hoisted to safety Sunday afternoon by helicopter.

Three people are confirmed dead after the huge cruise ship carrying more than 4,200 people ran aground on Friday night.

Asked Sunday by Sky Italia TV about allegations that the captain had left the ship before the last passenger had been rescued, Grosseto prosecutor Francesco Verusio replied, "Unfortunately I must confirm that circumstance."

Italian officials have lowered the number of people still unaccounted for to 17. Tuscany's regional president Enrico Rossi said that there were now six crew members and 11 passengers who haven't been located out of the 4,200-plus people who were aboard the Costa Concordia when it struck a reef and capsized Friday night.

Police divers and rescue crews on Sunday circled around the wreckage of ship off the coast of the island of Giglio. Crews in dinghies were touching the hull with their hands, near the site of the 160-foot-long gash where water flooded in and caused the ship to fall on its side.

Coast guard officials have said divers will try to enter the belly of the ship in case anyone is still inside.

Coast guard spokesman Capt. Filippo Marini told Sky Italia TV that Coast Guard divers have recovered the so-called "black box" with the recording of the navigational details from a compartment now under water.

Late Saturday, firefighters who had been searching the Costa Concordia for those who remain missing heard distinct shouts, "one in a male voice, the other in a female voice" coming from the cruiser liner, Coast guard officer Marcello Fertitta said.

They turned out to be a honeymooning South Korean couple, who were brought out in good condition, Prato fire Cmdr. Vincenzo Bennardo told The Associated Press from the scene.

The terrifying, chaotic escape from the luxury liner was straight out of a scene from "Titanic" for many of the 4,000-plus passengers and crew on the ship, which ran aground off the Italian coast late Friday and flipped on its side.

Many passengers complained the crew didn't give them good directions on how to evacuate and once the emergency became clear, delayed lowering the lifeboats until the ship was listing too heavily for many to be released.

Several other passengers said crew members told passengers for 45 minutes that there was a simple "technical problem" that had caused the lights to go off.

Passengers said they had never participated in an evacuation drill, although one had been scheduled for Saturday. The cruise began on Jan. 7.

Costa Crociera SpA, which is owned by the U.S.-based cruise giant Carnival Corp., defended the actions of its crew and said it was cooperating with the investigation. Carnival Corp. issued a statement expressing sympathy that didn't address the allegations of delayed evacuation.

The captain, Francesco Schettino, was detained for questioning by prosecutors, investigating him for suspected manslaughter, abandoning ship before all others, and causing a shipwreck, state TV and Sky TV said. Prosecutor Francesco Verusio was quoted by the ANSA news agency as saying Schettino deliberately chose a route that was too close to shore.

Asked by SKT TV on Sunday SAKY France said two of the confirmed victims were Frenchmen; a Peruvian diplomat identified the third victim as Tomas Alberto Costilla Mendoza, 49, a crewman from Peru. Some 30 people were injured, at least two seriously.

The Philippine Department of Foreign Affairs said some 300 of the crew members were Filipinos and that three of them were injured.

Anello Fiorentino, captain of a ferry that runs between Giglio and the mainland, said he makes the crossing every day without encountering problems.

"Yes, if you get near the coast there are reefs, but this is a stretch of sea where all the ships can safely pass," he said.

Islanders on Giglio opened up their homes and businesses to accommodate the sudden rush of survivors.

Rossana Bafigi, who runs a newsstand, said she was really moved by the reaction of the passengers.

She showed a note left by one Italian family that said, "We want to repay you for the disturbance. Please call us, we took milk and biscuits for the children. Claudia."

At Mass on Sunday morning in Giglio's main church, which opened its doors to the evacuees Friday night, altar boys and girls brought up to the altar a life vest, a rope, a rescue helmet, a plastic tarp and some bread.

Don Lorenzo, the parish priest, told the faithful that he wanted to make this admittedly "different" offering to God as a memory of what had transpired.

He said each one carried powerful symbolic meaning for what happened on Friday night: the bread that multiplied to feed the survivors, the rope that pulled people to safety, the life vest and helmet that protected them, and the plastic tarp that kept cold bodies warm. "Our community, our island will never be the same," he told the few dozen islanders gathered for Mass.