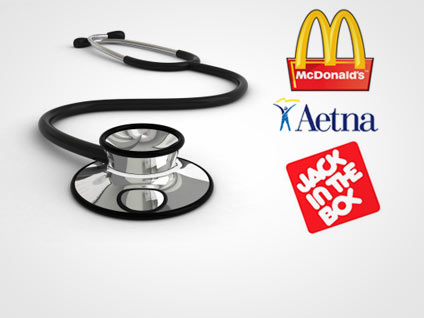 The federal government has granted 30 companies and organizations one-year waivers to exempt them from one of the newly-implemented health care reforms.

A set of consumer protections enacted in President Obama's health care overhaul kicked in last month, including a requirement for insurers to gradually phase out annual coverage limits. The waivers granted last month exempt the organizations in question from that requirement; they were approved for organizations offering limited-benefit plans, such as Jack in the Box and the United Federation of Teachers Welfare Fund (a New York-based union health care provider). The 30 entities granted waivers are listed here and listed below.

The waivers were granted after insurers threatened to raise premiums dramatically or drop the limited-benefit plans all together rather than pay for the additional coverage. The exemptions apply to insurance plans for nearly a million people. Limited-benefit plans are often used to cover part-time or low-wage employees, and they often have low premiums and high deductibles. The Department of Health and Human Services opted to grant those entities waivers rather than allow consumers to lose coverage or see their premiums rise.

"The waivers are about insuring people and protecting the coverage they have until there are better options available to them in 2014," White House spokesperson Robert Gibbs said today.

The bulk of the new health care reforms will go into effect in 2014. At that point, some large employers that drop coverage for their workers will be subject to a fee. Consumers will also have the option of using new state-based health care exchanges to access the individual health care market.

By 2014, insurers will be completely barred from limiting annual benefits. The new regulations are being phased in until then: companies without waivers will have to provide a minimum of $750,000 in coverage next year, $1.25 million in coverage in 2012, and $2 million in 2013.

"HHS is to committed strengthening employer-based coverage for employees and retirees, while building a bridge to a new competitive marketplace in 2014," HHS spokesperson Jessica Santillo said.

The waiver granted to the United Federation of Teachers Welfare Fund will have the biggest impact in terms of numbers, applying to 351,000 enrollees of the Fund's supplemental insurance plan. McDonald's insurance carrier, BCS Insurance, received a waiver to cover 115,000 enrollees.

Gibbs said today that the White House does not perceive the need to grant the waivers as a flaw of the new health care reforms.

"This is about implementing a bill correctly," he said, to ensure that "as reform ramps up, we protect consumers and don't put them at the mercy of health insurance companies."

Below are the 30 entities that received waivers, along with the number of enrollees impacted:

Stephanie Condon is a political reporter for CBSNews.com. You can read more of her posts here. Follow Hotsheet on Facebook and Twitter.
View CBS News In
CBS News App Open
Chrome Safari Continue
Be the first to know
Get browser notifications for breaking news, live events, and exclusive reporting.