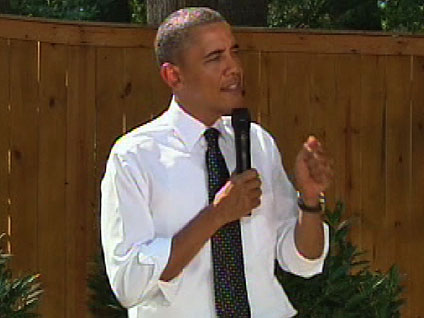 Six months after President Obama signed his landmark health care overhaul into effect, a small portion of the legislation is finally going into effect.

Speaking to voters in the backyard of a private residence in Northern Virginia, Mr. Obama called the reforms that go into effect tomorrow "the most important 'Patient's Bill of Rights' that we've ever seen in history."

"We are now actually able to provide some help to the American people," Mr. Obama said.

Yet even as some of the reforms finally begin to kick in, misconceptions about the legislation persist, and efforts to roll back the laws -- such as lawsuits against them -- are moving forward. And just weeks before the midterm elections, Democrats have yet to see the political benefits of the overhaul materialize.

Mr. Obama today began his backyard discussion by broaching the sluggish economy -- the issue weighing most heavily on voters' minds.

He added, though, that he ran for president "not just in anticipation of a crisis. I ran because middle class families all across the country were seeing their security eroded... Health care was one of those issues we could no longer ignore."

The most significant portions of the health care law will go into effect in 2014 -- it will take time to build these new health care programs, Democrats have said. On top of that, delaying the implementation of the more significant programs brought down the 10-year cost of the legislation.

What begins tomorrow, however, are a series of consumer protections and regulations that Democrats have billed the "Patient's Bill of Rights." The new regulations include:

For those joining a new plan:

Despite the administration's efforts to sell the new reforms, Americans are still wary about the laws. A recent CBS News poll showed that 37 percent of Americans approve of the reforms, but 49 percent disapprove. Voters were split, 28 percent to 28 percent, about whether a vote in favor of health care reform would make them more likely or less likely to support that politician. However, the plurality, at 41 percent, said it made no difference.

Health and Human Services Secretary Kathleen Sebelius told Politico this week the hardest part of her job was fighting the constant "drumbeat" of "erroneous information."

Indeed, a new Associated Press poll shows that more than half of Americans mistakenly believe the new laws will raise taxes for most people this year.

Republicans have seized on the bill's unpopularity. The party has maintained an aggressive campaign against the health care overhaul since it was signed into law, pledging to repeal it if they take over the Congress this November -- or at least defund the laws, given that actually repealing the measure is infeasible as long as Mr. Obama is president.

The White House is making efforts to get the word out about the reform's benefits. It launched a new website today that provides information about the law, information about how the reforms are impacting state health care systems, and stories from individuals directly impacted. One such individual, Gail O'Brien, was at Mr. Obama's meeting today to express her thanks.

"Now I can focus on my health instead of focusing on how am I going to pay to get better," she said.

Democrats are betting that once Americans hear more stories like Gail's, or experience them for themselves, they'll come around on the reforms. The president said today that the Republicans' repeal message won't hold up at that point.

"I want to see [Republicans] come and talk to Gail... or talk to any of you who now have more security," he said. "And look you in the eye, and say, 'Sorry Gail, you can't buy health insurance. I don't think that's what this country stands for."

Stephanie Condon is a political reporter for CBSNews.com. You can read more of her posts here. Follow Hotsheet on Facebook and Twitter.
View CBS News In
CBS News App Open
Chrome Safari Continue
Be the first to know
Get browser notifications for breaking news, live events, and exclusive reporting.