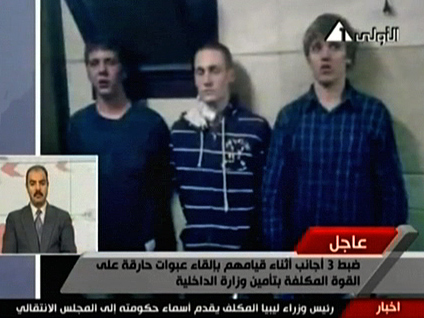 INDIANAPOLIS - Relatives and school officials said Tuesday they were working with U.S. officials to free three American college students arrested during protests in Cairo, where an Egyptian official said they were throwing firebombs at security forces.

An Egyptian official said the students were arrested on the roof of a university building near Tahrir Square. The official spoke on condition of anonymity because there was no authorization to speak to the media.

Mom reacts to video of son detained in Cairo

The U.S. Department of State said it was aware of the detentions of three U.S. citizens in connection with Tahrir Square protests and was seeking access.

The wave of protests and violence across Egypt that began Saturday has left 29 dead and thrown the country's politics into chaos less than a week before landmark parliamentary elections were to begin. Tens of thousands of people filled Tahrir Square on Tuesday to intensify pressure on Egypt's military leaders to hand over power to a civilian government.

A spokeswoman for the American University in Cairo identified the students as Luke Gates, 21, Derrik Sweeney, 19, and Gregory Porter, 19. They attend Indiana University, Georgetown University and Drexel University, respectively.

Morgan Roth said the three students had been held by Egyptian authorities since their arrest Monday night but she did not know whether they had been formally charged or what the charges might be. She said it wasn't unusual for American students to get "caught up" in Egyptian politics.

"There's a lot of very contagious passion right now," she said. Students from the U.S. don't always realize what it's like to live in a country without free speech or other civil liberties, and sometimes are motivated to work to change those conditions, she said.

Egyptian state television showed brief footage of the students' driver's licenses and other documents strewn across a desk while the three young men stood staring at the camera.

"He's a 19-year-old who got caught up in something, and I hope they release him," Kevin Sweeney, Derrik's father, told CBS Radio News.

Sweeney, from Jefferson, Mo., said he's spoken with the U.S. Embassy several times, but they don't have any updates.

Sweeney, who did an internship earlier this year in the office of Rep. Blaine Luetkemeyer was studying Arabic.

Georgetown professor Amin Bonnah said Sweeney was the best student in one of his intermediate Arabic classes. Bonnah described Sweeney as funny and pleasant, a student who came after class and to office hours to speak in Arabic and ask questions.

His mother, Joy Sweeney, described him as a principled person who stands up for his beliefs. But she also said her son was the peacemaker in the family when siblings fought and she couldn't see him acting violently.

Luke Gates' father, Bill Gates, said his son is a junior in a foreign studies program at Indiana University and has been in Egypt since August, studying political science and Arabic.

A Twitter feed apparently belonging to Gates describes taking part in the renewed protests, with a post Saturday saying "we were throwing rocks and one guy accidentally threw his phone =("

Other tweets describe feeling the effects of tear gas ("6 hours at tahrir, enough tear gas for tonight") and other injuries sustained during the protests. One tweet sent Saturday read "honestly, hopefully i die here."

The feed's final message, posted Monday, was "reports of tear gas being fired from AUC campus on Tahrir, university officials have started investigating."

Meanwhile, Egypt's military ruler said the armed forces are prepared to hold a referendum on immediately transferring power to a civilian authority if people demand it.

Field Marshal Hussein Tantawi also told the nation in a televised address Tuesday that presidential elections will be held before June 30, but did not specifically mention a date for the transfer of power.

In his brief address, Tantawi sought to cast the military as the nation's foremost patriots and angrily denounced what he called attempts to taint its reputation.

Tens of thousands of protesters gathered in Cairo's Tahrir Square immediately rejected Tantawi's proposal with chants of "erhal," or leave.

Previously, the military rulers had floated late next year or early 2013 as the timetable for transferring power.

The military's concession came less than a week before the first parliamentary election since the ouster nine months ago of longtime authoritarian ruler Mubarak. The elections are staggered over three months.

"Our demands are clear. We want the military council to step down and hand over authority to a national salvation government with full authority," said Khaled El-Sayed, a member of the Youth Revolution Coalition and a candidate in the upcoming parliamentary election. The commander of the Military Police and the Interior Minister, who is in charge of the police, must be tried for the "horrific crimes" of the past few days, he added.