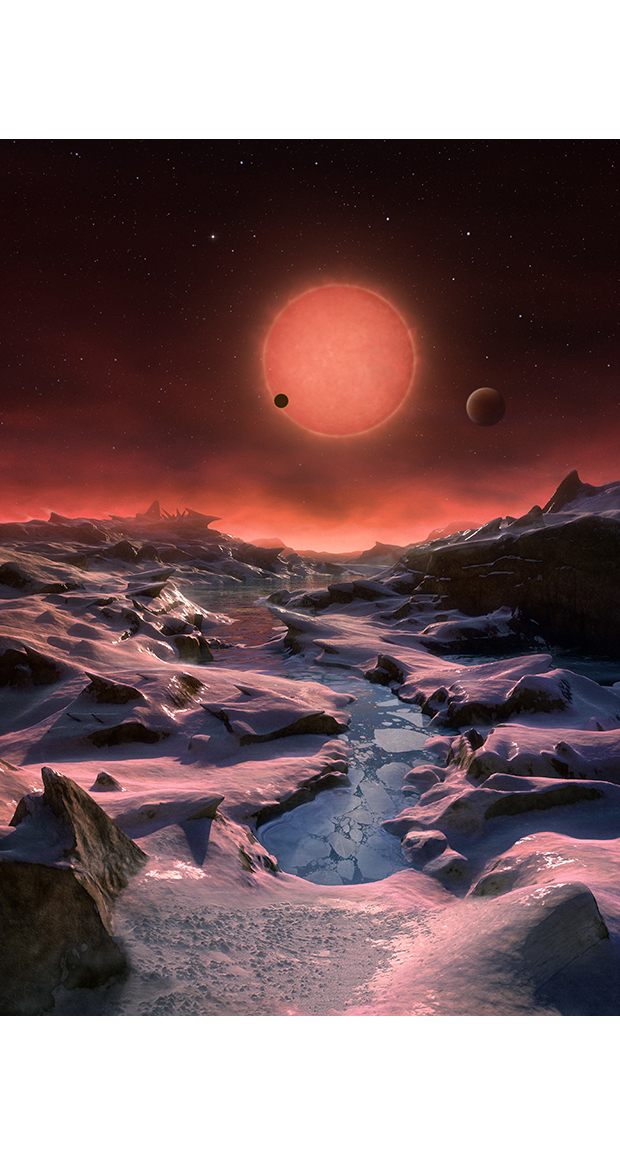 CAPE CANAVERAL, Fla. -- Astronomers searching for life beyond our solar system may need to look no farther than a little, feeble nearby star.

A Belgian-led team reported Monday that it's discovered three Earth-sized planets orbiting an ultra-cool dwarf star less than 40 light-years away. It's the first time planets have been found around this type of star - and it opens up new, rich territory in the search for extraterrestrial life.

Because this star is so close and so faint, astronomers can study the atmospheres of these three temperate exoplanets and, eventually, hunt for signs of possible life. They're already making atmospheric observations, in fact, using NASA's Spitzer Space Telescope. The Hubble Space Telescope will join in next week.

Altogether, it's a "winning combination" for seeking chemical traces of life outside our solar system, said Massachusetts Institute of Technology researcher Julien de Wit, a co-author of the study, released by the journal Nature.

The star in question - named Trappist-1 after the Belgian telescope in Chile that made the discovery - is barely the size of Jupiter and located in the constellation Aquarius.

Other exoplanet searches have targeted bigger, brighter stars more like our sun, but the starlight in these cases can be so bright that it washes out the signatures of planets. By comparison, cool dwarf stars that emit infrared light, like Trappist-1, make it easier to spot potential worlds.

"Systems around these tiny stars are the only places where we can detect life on an Earth-sized exoplanet with our current technology," Gillon said in a statement. "So if we want to find life elsewhere in the universe, this is where we should start to look."

The two inner exoplanets take between 1.5 and 2.4 days to orbit the Trappist-1 star. The precise orbit time of the third planet is not known, but it falls somewhere between 4.5 days and 73 days. That puts the planets 20 times to 100 times closer to their star than Earth is to our sun, Gillon noted. The setup is more similar in scale to Jupiter's moons than to our solar system, he added.

Although the two innermost planets are very close to the star, it showers them with only a few times the amount of energy that Earth receives from our own sun. The third exoplanet farther out may receive significantly less of such radiation than Earth does.

The astronomers speculate the two inner exoplanets may have pockets where life may exist, while the third exoplanet actually might fall within the habitable zone - real estate located at just the right distance from a star in order to harbor water and, possibly, life.

Spitzer and Hubble should answer whether the exoplanets have large and clear atmospheres, according to de Wit. They also might be able to detect water and methane, if molecules are present.

Gillon and his colleagues identified the three exoplanets by observing regular dips in the infrared signals emanating from the Trappist-1 star, some 36 light-years away. A single light-year represents about 6 trillion miles.

The astronomers conducted the survey last year using the Transiting Planets and Planetesimals Small Telescope, or Trappist. It's considered a prototype for a more expansive European project that will widen the search for potentially habitable worlds to 500 ultra-cool stars. This upcoming project is dubbed Speculoos - short for Search for Habitable Planets Eclipsing Ultra-Cool Stars.