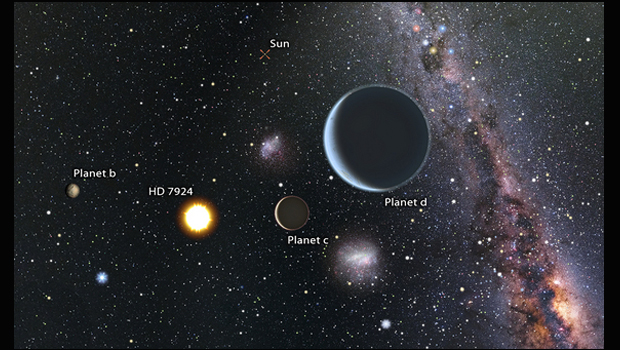 Astronomers have discovered two new alien worlds a bit larger than Earth circling a nearby star.

The newfound exoplanets, known as HD 7924c and HD 7924d, are "super Earths" with masses about 7.9 and 6.4 times greater, respectively, than that of our home planet, researchers said. The planets orbit the star HD 7924, which lies just 54 light-years from the sun -- a mere stone's throw considering the size of the Milky Way, which is on the order of 100,000 light-years wide.

The discovery brings the number of known planets in the HD 7924 system to three. (Another super Earth, called HD 7924b, was spotted there in 2009.) HD 7924b, HD 7924c and HD 7924d all lie closer to their host star than Mercury does to the sun. They complete one orbit in five, 15 and 24 days, respectively, researchers said. [The Strangest Alien Planets]

"The three planets are unlike anything in our solar system, with masses seven to eight times the mass of Earth and orbits that take them very close to their host star," study co-author Lauren Weiss, a graduate student at the University of California, Berkeley, said in a statement.

The research team, which was led by University of Hawaii (UH) graduate student BJ Fulton, used the combined observations of the three telescopes to detect tiny wobbles in the star HD 7924 caused by the gravitational pull of the two newfound planets, and then to verify the worlds' existence.

"Starspots, like sunspots on the sun, can momentarily mimic the signatures of small planets," said co-author Evan Sinukoff, also a UH graduate student. "Repeated observations over many years allowed us to separate the starspot signals from the signatures of these new planets."

The APF Telescope was recently revamped to make it fully robotic, and it now searches the skies for exoplanets without human oversight -- a key milestone in the ongoing exoplanet hunt, researchers said.

"This level of automation is a game-changer in astronomy," said co-author Andrew Howard, an astronomer at UH. "It's a bit like owning a driverless car that goes planet shopping."

Astronomers first found planets orbiting another star in 1992, and the exoplanet tally has now risen to nearly 2,000. More than half of these alien worlds have been discovered by NASA's Kepler space telescope, which launched in March 2009.