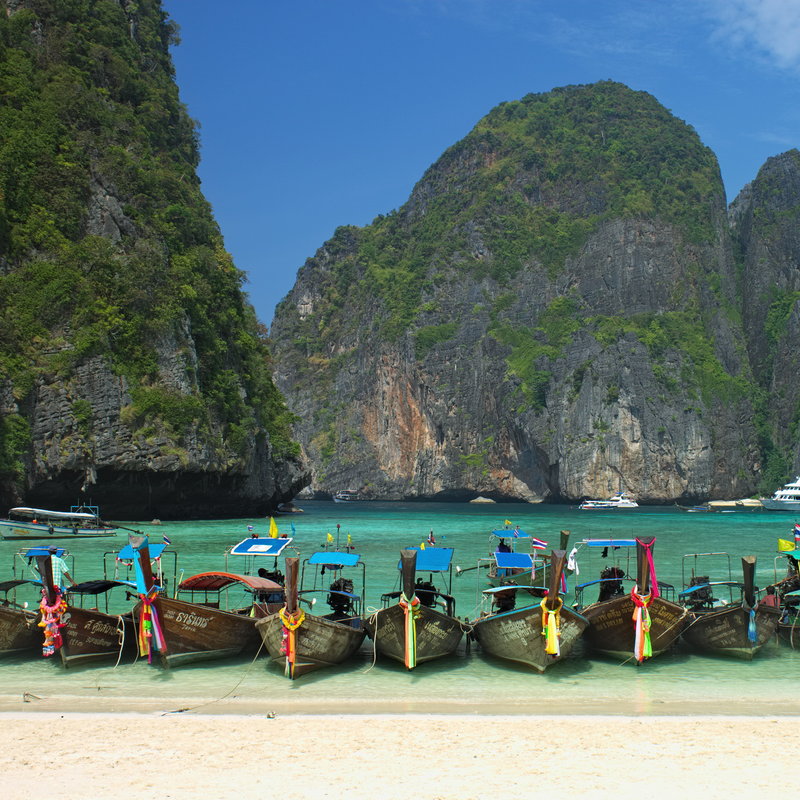 We can all agree that after months of polar vortexes and a Winter that refused to quit, the idea of hitting the beach sounds pretty terrific, right? Well, we're almost there. And to help get the ball rolling, we rounded up our favorite 25 beaches in the world. 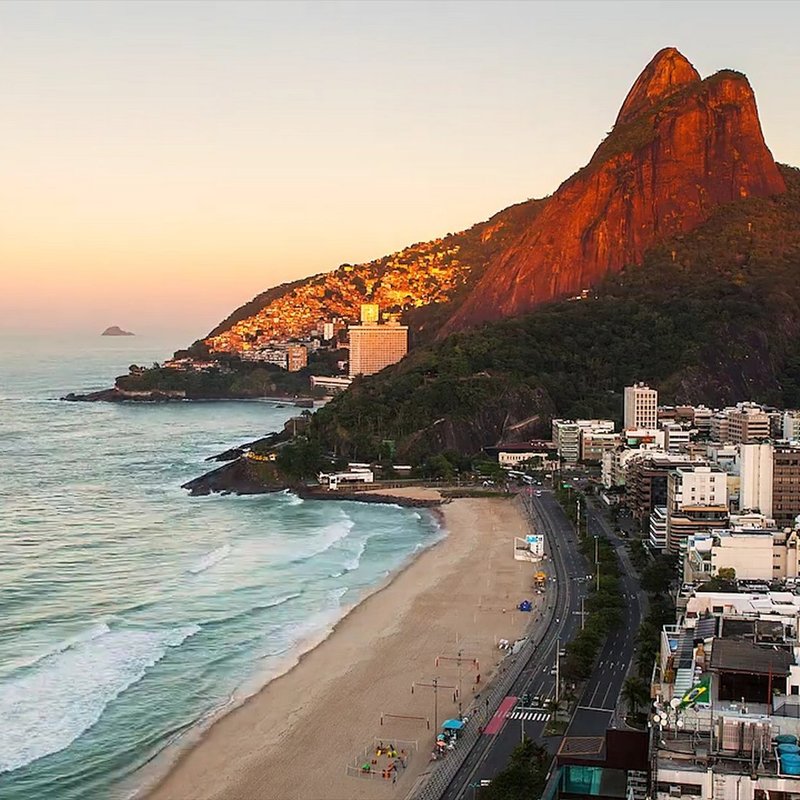 Ipanema Beach
Where: Rio de Janeiro, Brazil
Why it made our list: There's a reason bikinis and waxes are named after Brazilians. The city's as sizzling as its sexy locals, and this renowned party beach is your chance to totally not stare at them from behind your aviators.
Bonus: Vendors along the boardwalk sell caipirinhas, and there're plenty of waterfront gyms for pumping your pecs before starting that long, slow stroll down the beach. 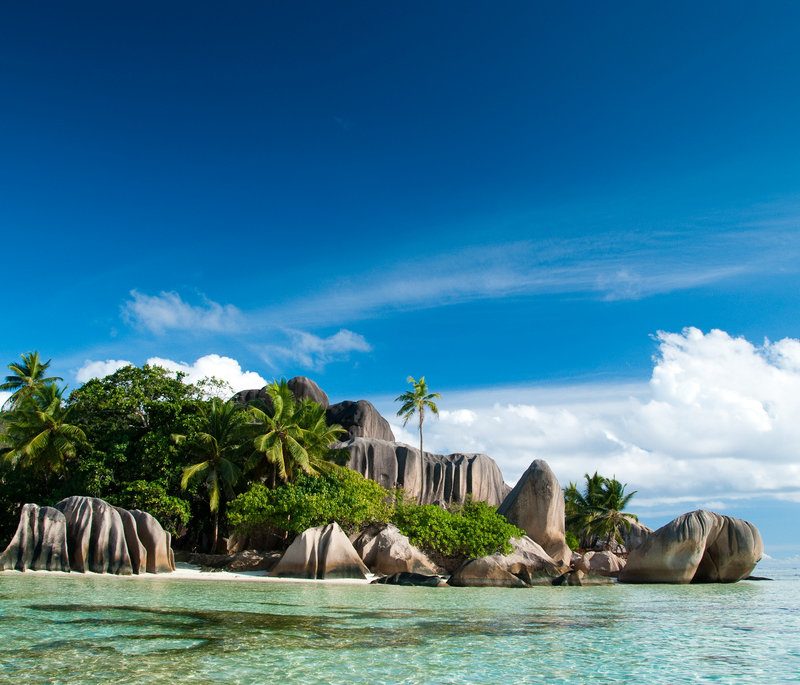 Anse Source d’Argent
Where: La Digue, Republic of Seychelles
Why it made our list: Its towering cliffs and pink sand make it one of the most photographed beaches in the world.
Bonus: La Digue, specifically its Veuve Nature Reserve, is the last place on earth where you can find the rare black paradise flycatcher bird, of which there are only about 100 left. Okay, so that's not much of a bonus but consider it your fun fact of the day. 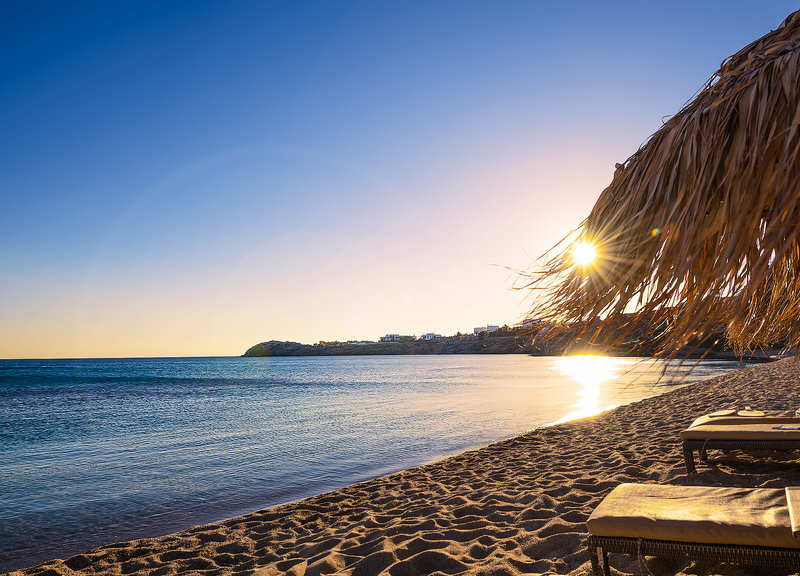 Paradise Beach
Where: Mykonos, Greece
Why it made our list: Paradise is home to the best sand on the Aegean, and Mykonos is known to be a wild party hotspot. Together, that's enough to make the list.
Bonus: There’s a monthly full-moon party, and Tropicana Beach Bar is consistently rated one of the top beach bars in the world. 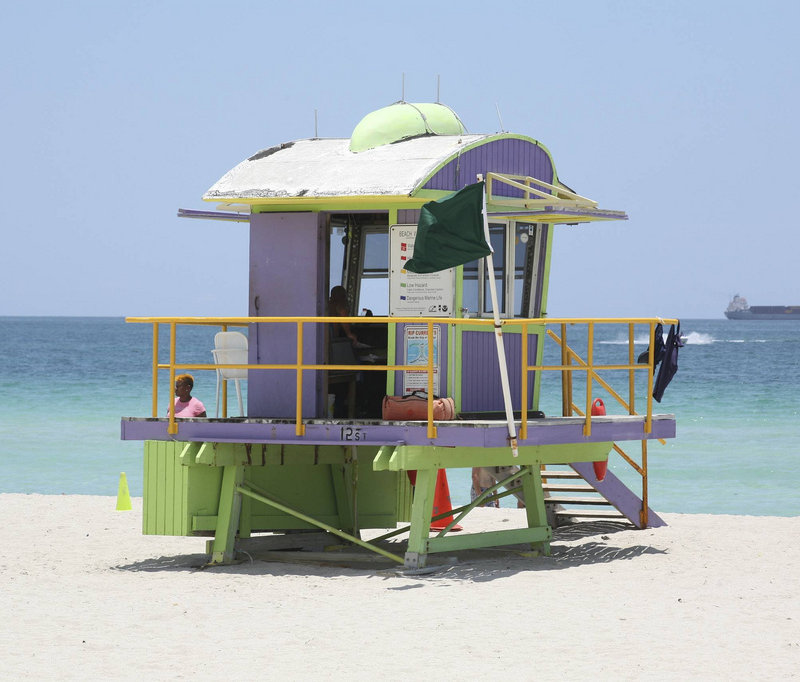 South Beach
Where: Miami, FL
Why it made our list: One bikini's skimpier than the next (and some girls don't even bother with them) making this an excellent spot to people watch. Just don't people stare.
Bonus: While alcohol's not technically allowed on the beach, you'd have to do something pretty outrageous to have anyone bother you about it. Plus with pool parties going on at beachfront hotels, clubs across the street from the ocean, and spring break-y spots like XXXX the party doesn't stop once you step off the sand. 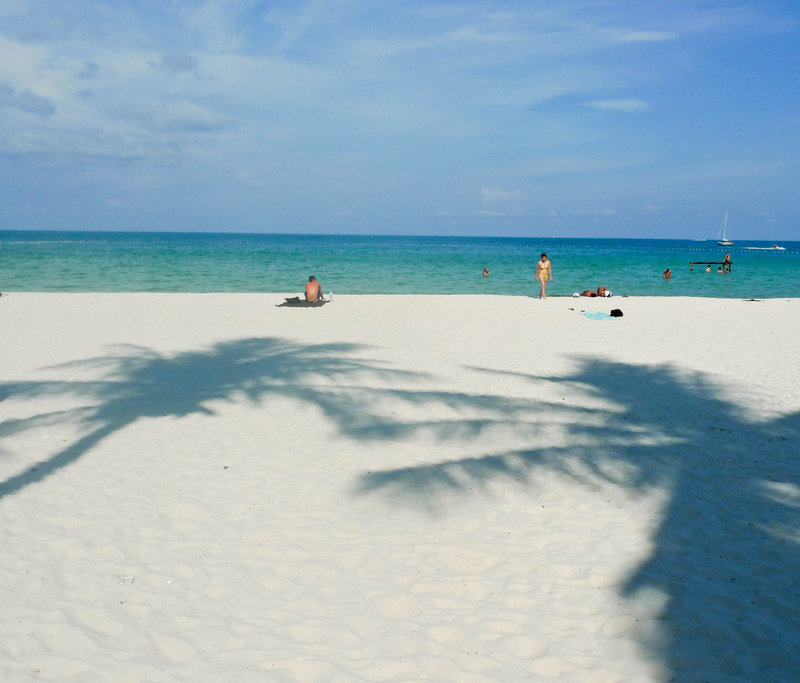 Sunrise Beach (Had Rin Nok)
Where: Koh Pha-Ngan, Thailand
Why it made our list: World famous Full Moon Party.
Bonus: When the lunar cycle isn't on your side, there are nightly fire shows on the beach.

Bahia Gardner
Where: Española Island, Galapagos
Why it made our list: If these approximately four million-year-old volcanic islands were good enough for Charles Darwin, they’re good enough for us.
Bonus: Famous for their many endemic species, Bahia Gardner is packed with sea lions, red lava lizards, and Española mockingbirds. The entire world population of Waved Albatrosses breeds here, as does the fun-to-say Blue-footed Boobie. Again, more giggling. 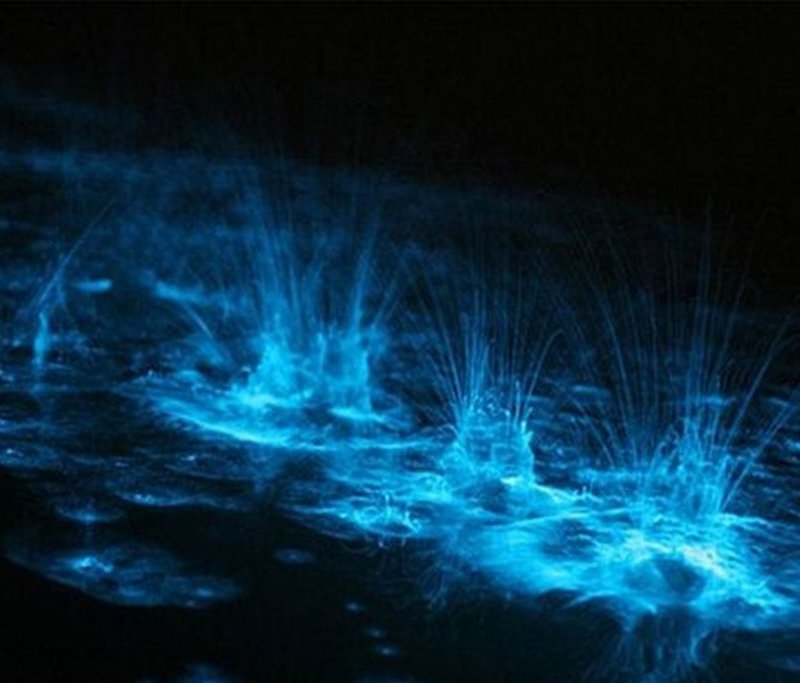 Mosquito Bay
Where: Vieques, Puerto Rico
Why it made our list: Not dubbed Bioluminescent Bay for nothing, Mosquito Bay's the world’s best example of this natural light show, which takes place when dinoflagellates are disturbed and emit a trail of neon blue like a leaking glow stick. Rent a clear polycarbonate canoe to see it up close.
Bonus: The food truck trend has reached America's 51st State (just kidding) -- check out Pastelillos de Alcapurrias for fried meat fritters, or No Name for home-style Puerto Rican fare on wheels. 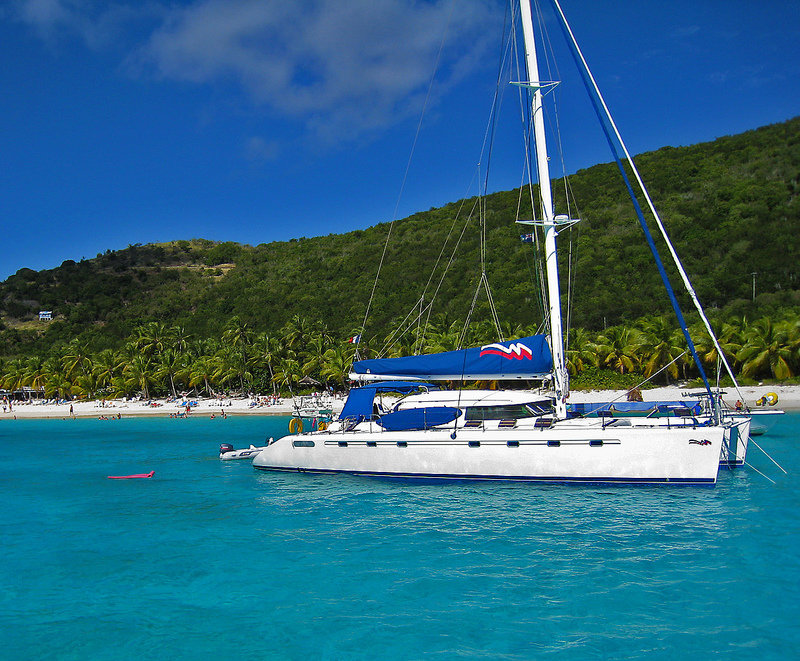 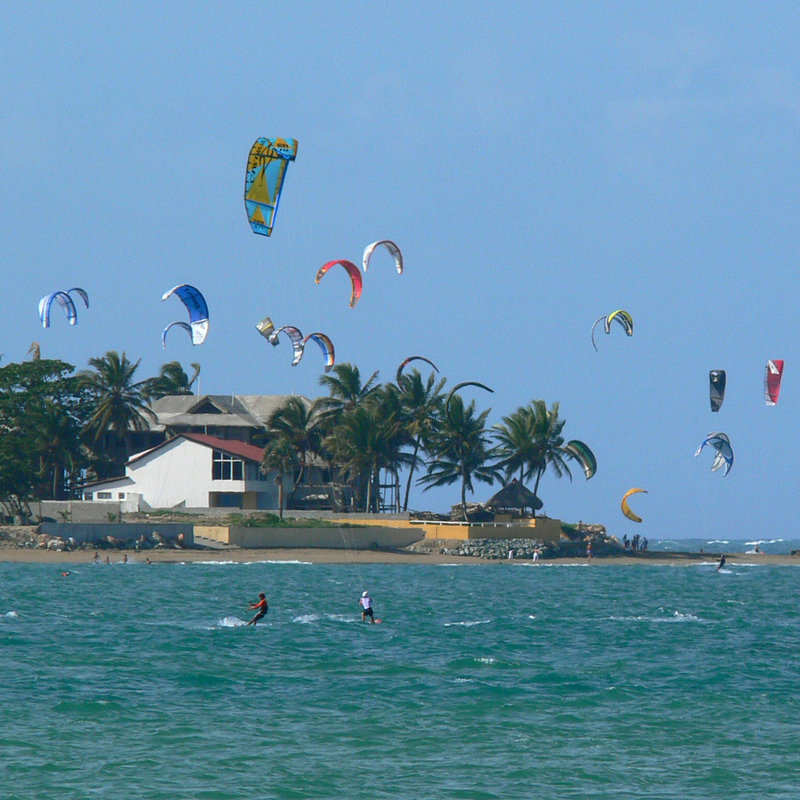 Related:Live Like A Castaway On Your Own Deserted Island

Kite Beach
Where: Cabarete, Dominican Republic
Why it made our list: On a windy day, the sky above Kite Beach will be filled with, get this, kites! One of the world’s top kite surfing spots, it hosts a giant competition every June.
Bonus: The Extreme Hotel is ideal for active travelers and features everything from a crossfit gym and yoga loft, to a flying trapeze and circus school. 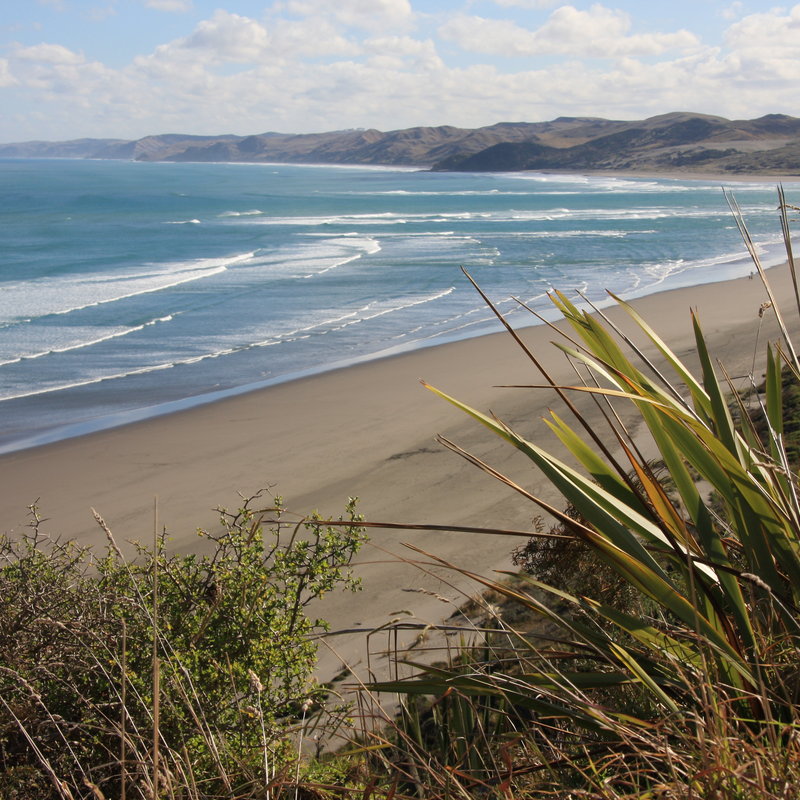 Manu Bay
Where: Raglan, New Zealand
Why it made our list: Manu Bay is a world-famous surf break, and even made an appearance in the cult movie The Endless Summer in 1966. Grab a board or watch the pros do their thing.
Bonus: The sand is black. And it's so fine, it squeaks with every step. 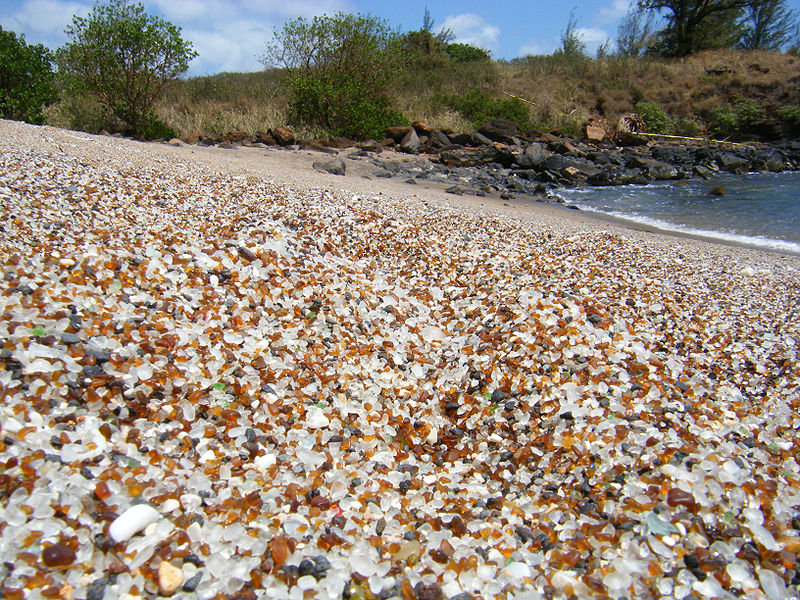 Glass Beach
Where: Kauai, Hawaii
Why it made our list: Because we hate getting sand in our... swim trunks. The clear, blue, and brown glass pebbles that cover this beach are a sight to behold. According to science, it takes the ocean about 10 to 30 years to create them.
Bonus: They make cheap souvenirs. 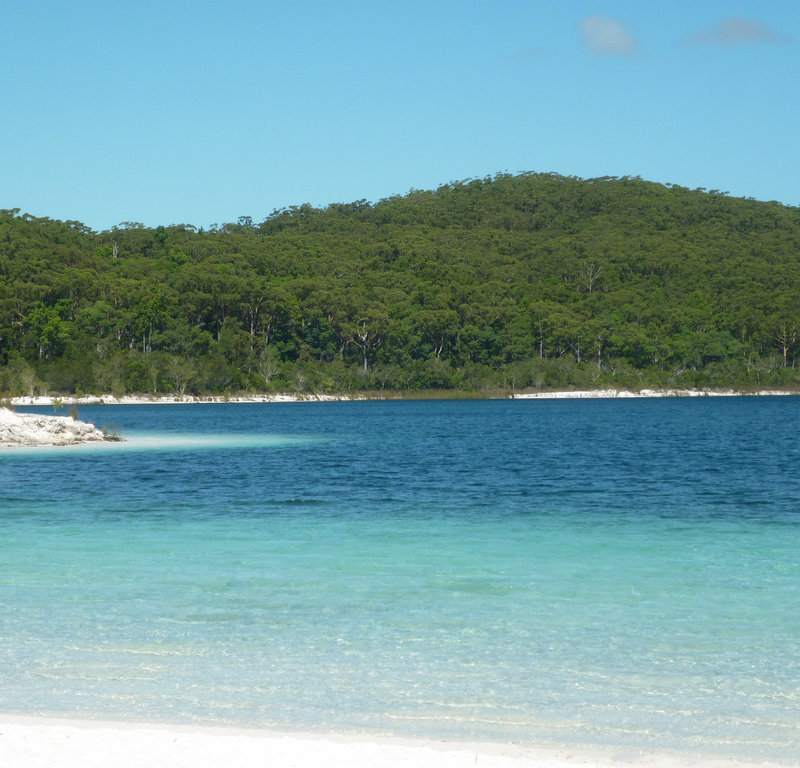 Lake McKenzie
Where: Fraser Island, Australia
Why it made our list: There's no salt to sting your eyes, as this all-silica beach is on a crystal clear, freshwater lake -- considered one of the cleanest in the world. Fraser Island's also one of the largest sand islands and features an ancient rainforest.
Bonus: Dingo sightings are perfect for yelling, “a dingo ate my baby!” 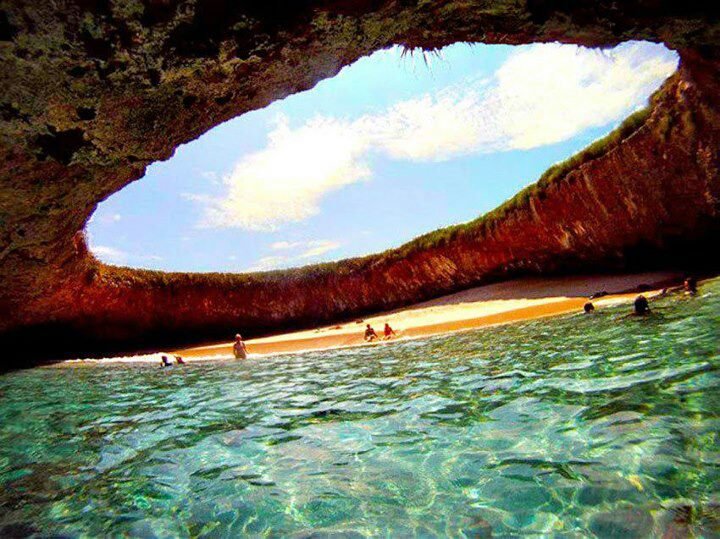 Hidden Beach
Where: The Marieta Islands by Puerto Vallarta, Mexico
Why it made our list: LOOK AT IT! While no longer as hidden as the name might suggest, this beach is rumored to have been formed by the Mexican military detonating test bombs in the early 1900s.
Bonus: Think of the street cred you'll get by dropping a reference to the secret, underground beach you just got back from vacationing on. Also, there's water tunnel you have to pass through to get there. 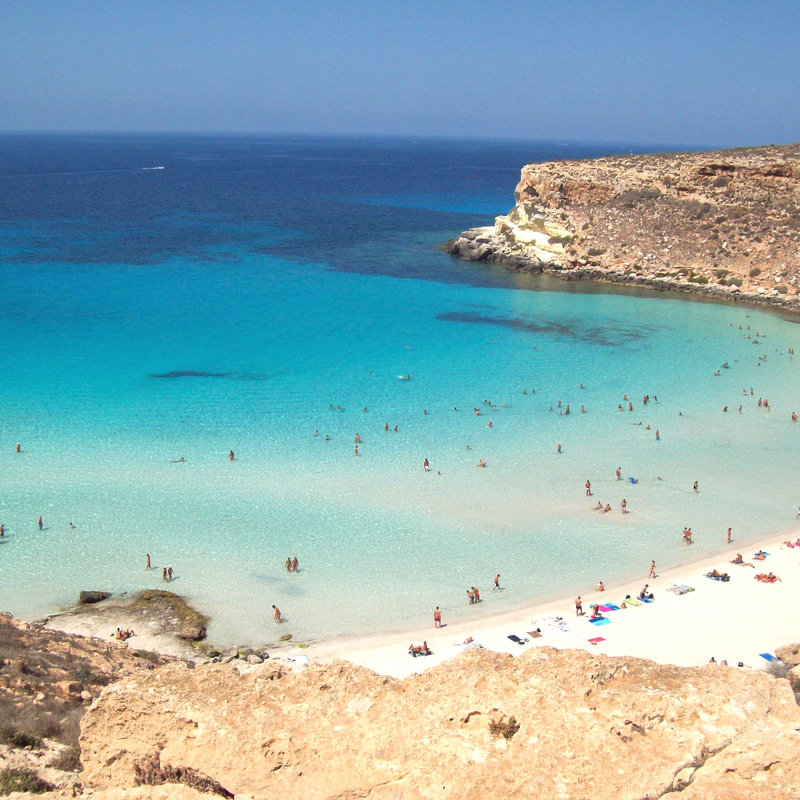 Rabbit Beach
Where: Lampedusa, Italy
Why it made our list: A stunning and secluded nature reserve accessed only by boat, Rabbit Beach (which, ironically, has no rabbits) is consistently rated one of the top four beaches in the world on TripAdvisor.
Bonus: Dolphins frolicking in the water and the nearby volcanic isle of Linosa, which has an incredible black and red beach. 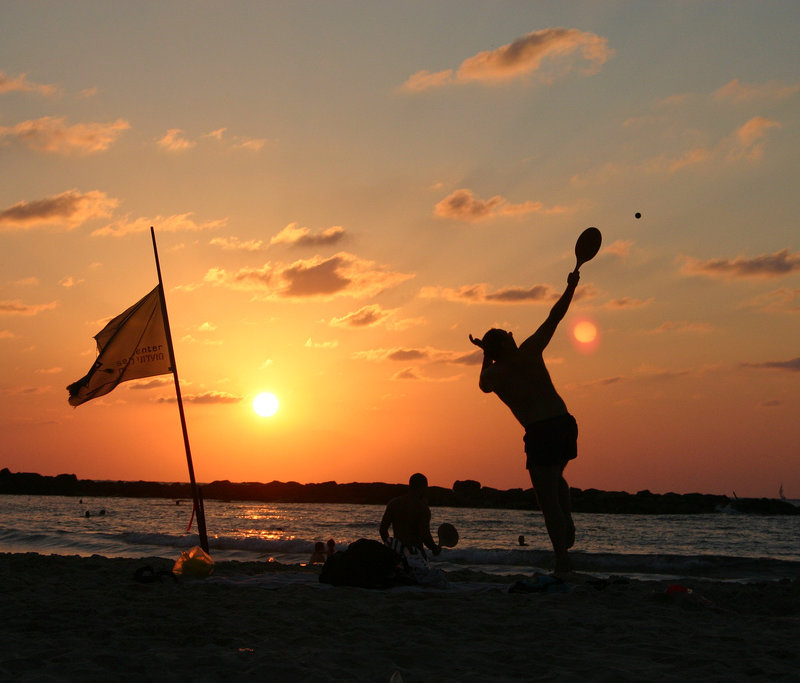 Gordon Beach
Where: Tel Aviv, Israel
Why it made our list: Young, hip people drinking at young, hip restaurants, doing young, hip things like smoking hookahs on the beach.
Bonus: For some reason, Israeli’s are super into paddle ball, so expect to watch dozens of heated games before returning to the US and telling anyone who will listen about how much you love paddle ball, or matkot as it's referred to there. Did you know some consider matkot Israel’s national sport? Of course, you did. 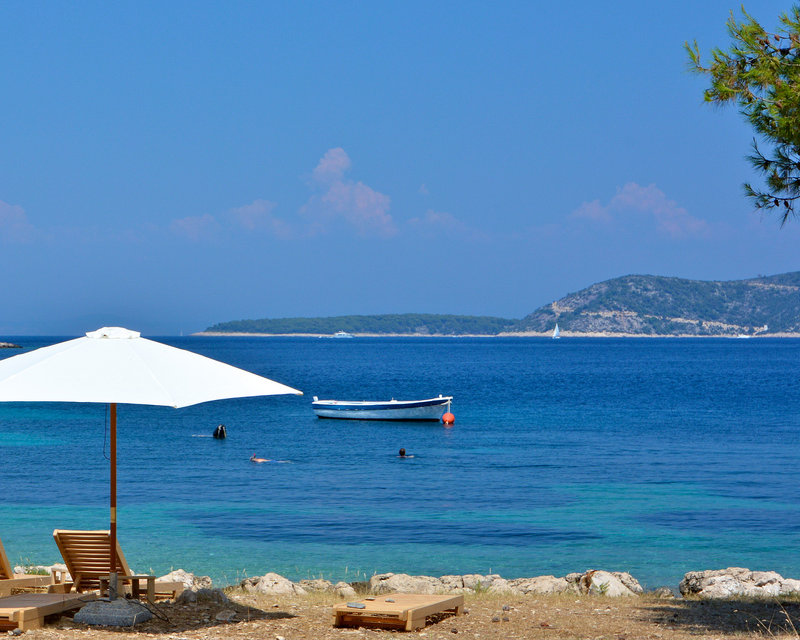 Paklinski Islands
Where: Hvar, Croatia
Why it made our list: Because the best beaches are those that are only accessible by private yacht, right? Right!?! This chain of 21 isles (known as ‘Hell’s Islands’ in Croatian) offer crystal clear water, hidden coves, and deserted beaches, many of which can be frequented au naturel.
Bonus: Croatia is home to the super affordable, totally epic yacht week. And former tennis star Goran Ivanisevic. Maybe. Unless he moved. 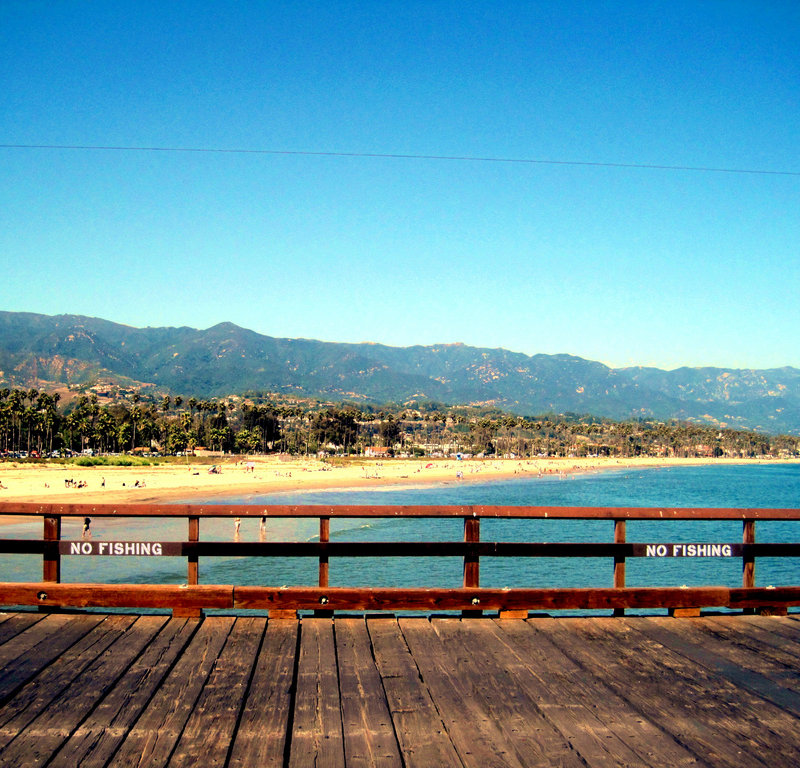 West Beach
Where: Santa Barbara, California
Why it made our list: Because it's the birthplace of American beach culture and is known as America's Riviera. That seemed like reason enough.
Bonus: Hot girls playing beach volleyball. 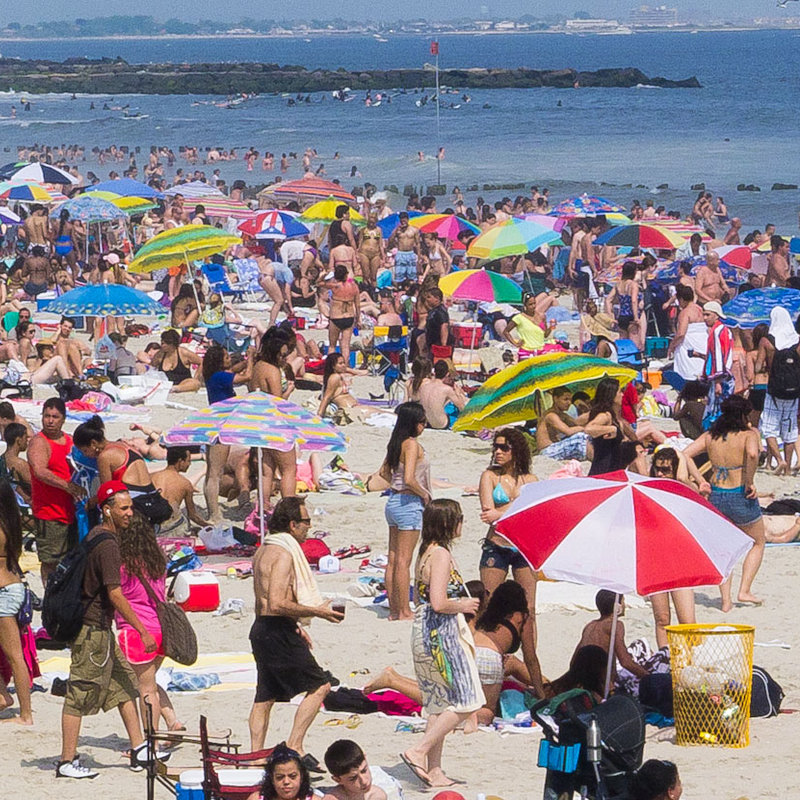 Rockaway Park
Where: Queens, New York City
Why it made our list: Admittedly, it’s not a particularly scenic -- or even clean -- beach, but for millions of subway bound, nature-deprived New Yorkers, it's the best they've got. Also, nothing beats mocking a pale, out-of-place hipster worried about getting sand in his custom messenger tote.
Bonus: Rockaway Taco makes pretty much the best tacos ever. And they're totally worth an hour sweating on the subway.

Sophie-Claire Hoeller is Thrillist's über-efficient German associate travel editor, and considers herself something of a beach connoisseur. Follow her @Sohostyle 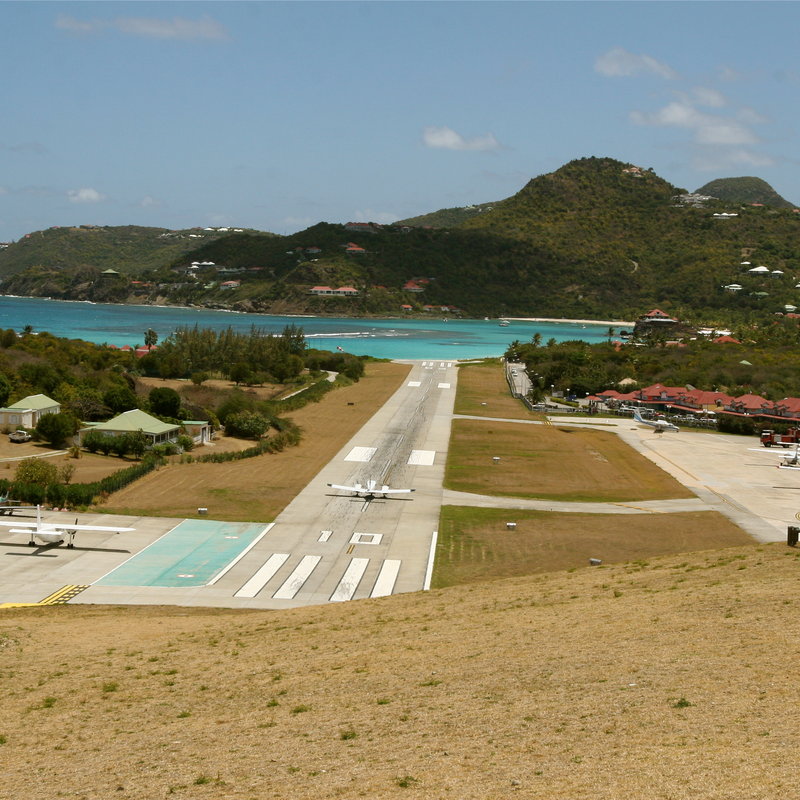 Plage de St. Jean
Where: St. Barths, French Caribbean
Why it made our list: Located at the end of the island's airport (which claims to have one of the world's shortest landing strips at 2,100 feet), this beautiful beach comes with an air of danger; in 2009, a plane ran out of runway and crashed on it. Thankfully, no one was injured.
Bonus: A playground for the super rich and mega famous, expect to spy celebs sipping martinis. Or, at the least, planes taking off and landing above your beach chair. 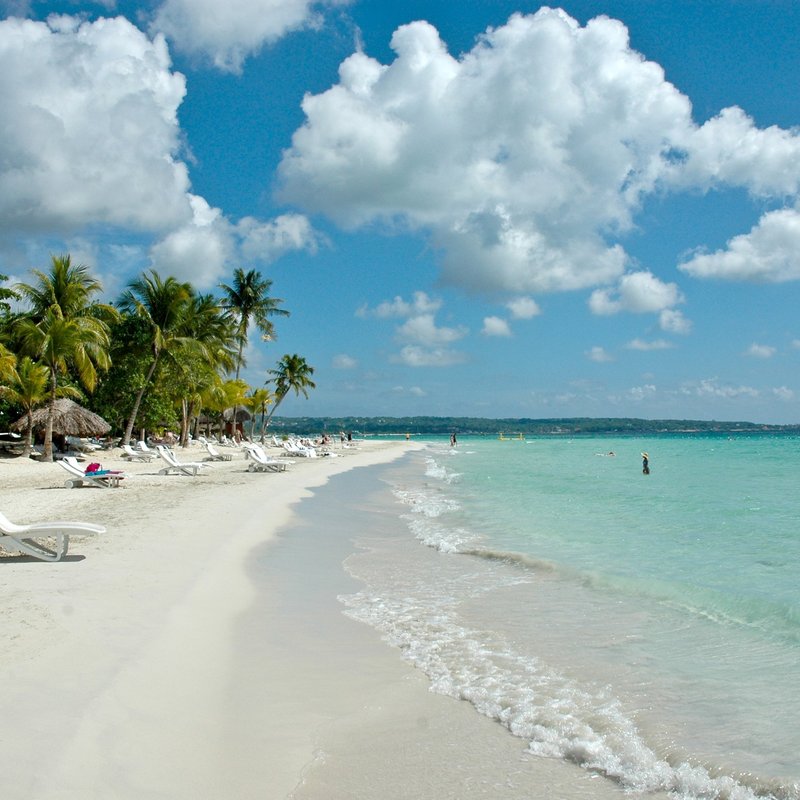 7 Mile Beach
Where: Negril, Jamaica
Why it made our list: Flanked by epic cliffs, it's one of the longest and most beautiful beaches in the world. Although, it's actually only SIX miles long, just so you know.
Bonus: There’s a Margaritaville right on the beach! Kidding. Instead, hit Rick's Café -- considered one of the best beach bars in the world, it's perched atop the aforementioned cliffs. 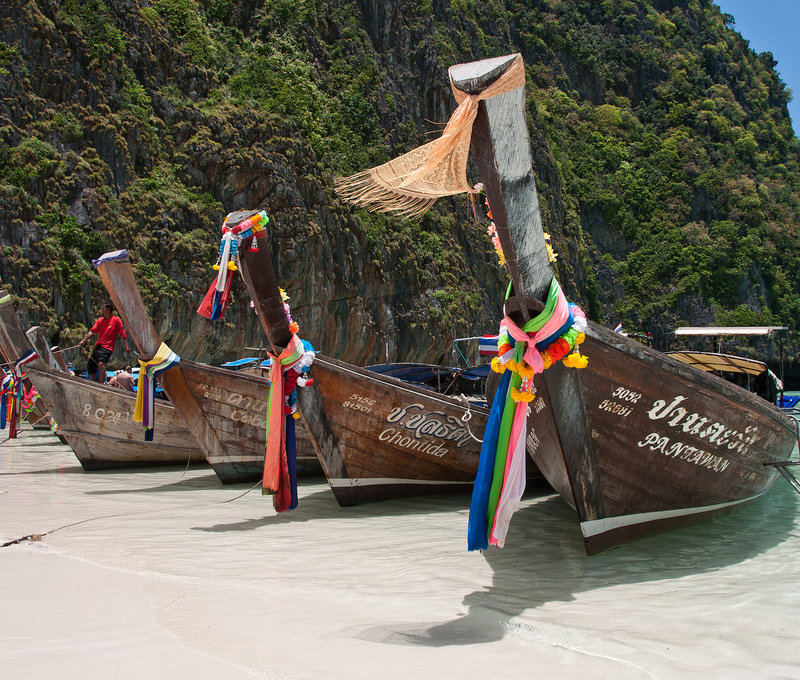 Maya Bay
Where: Ko Phi Phi, Thailand
Why it made our list: There’s a reason this plush tropical beach was used as the backdrop for the cult movie The Beach, and that reason is probably that they needed one of the world's most gorgeous tropical beaches in the film. Or, it could just be cheaper to shoot a movie in Thailand.
Bonus: Buckets of cheap Thai beer.

Plage de Tahiti
Where: St. Tropez, France
Why it made our list: This nude beach just might be one of the world’s sexiest.
Bonus: A notorious celeb hotspot since the '70s, Eva Green and Naomi Campbell have been spotted here recently. 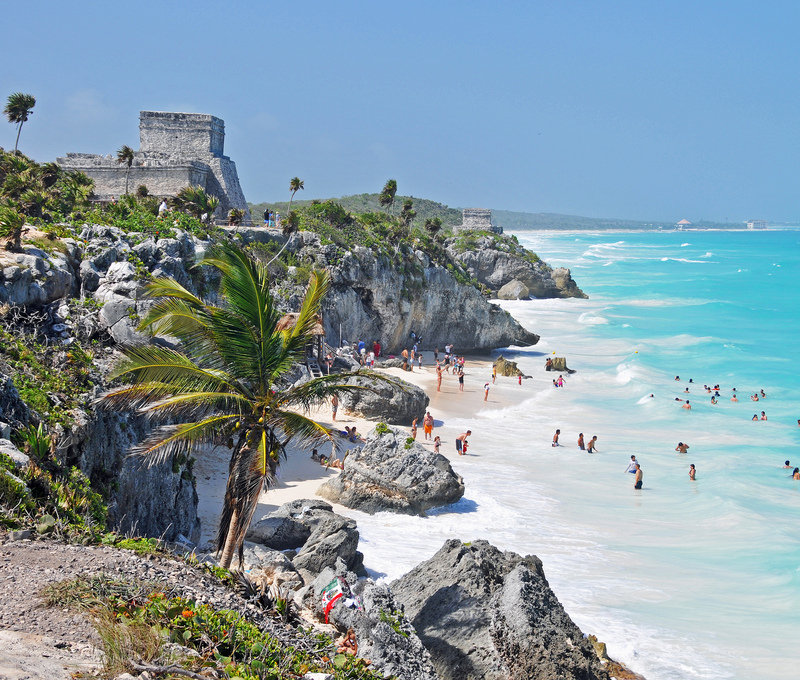 El Castillo
Where: Tulum, Mexico
Why it made our list: With Mayan ruins in the background, this white sand paradise is accented by clear water and colorful fishing boats; meanwhile, festive locals salsa dance on nearby Playa Esperanza.
Bonus: Climbing pyramids, swimming in cenotes, kite surfing, and eating fish tacos -- you will not get bored. 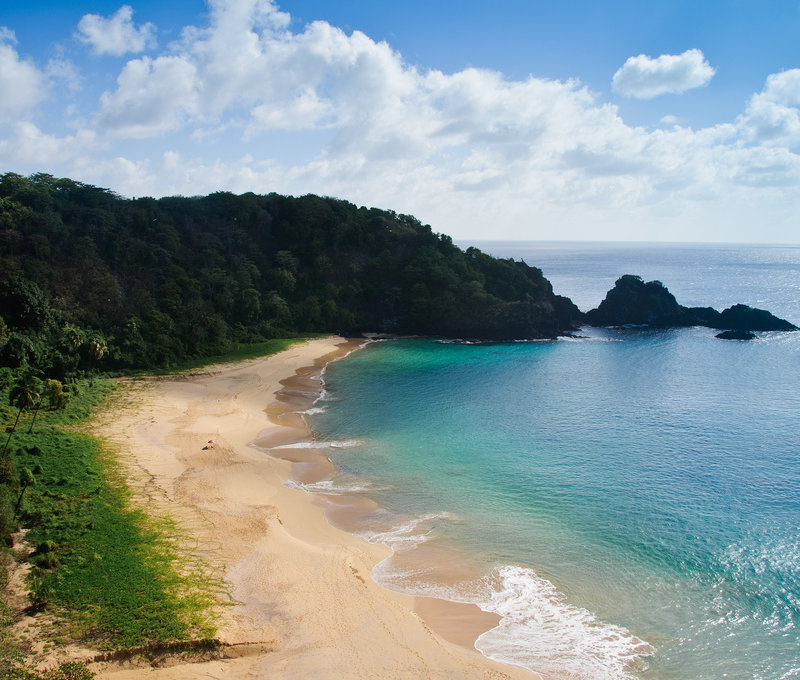 Baia do Sancho
Where: Fernando de Noronha, Brazil
Why it made our list: TripAdvisor's hands-down best beach in the world, this Brazilian escape -- with its turquoise waters and coral reefs -- is super secluded and really, really difficult to get to; as in, down a dirt road, a few rickety ladders, and through a tight crevasse -- you get the idea.
Bonus: You can combine a trip to the world’s best beach with the World Cup this Summer, or the Olympics in 2016. 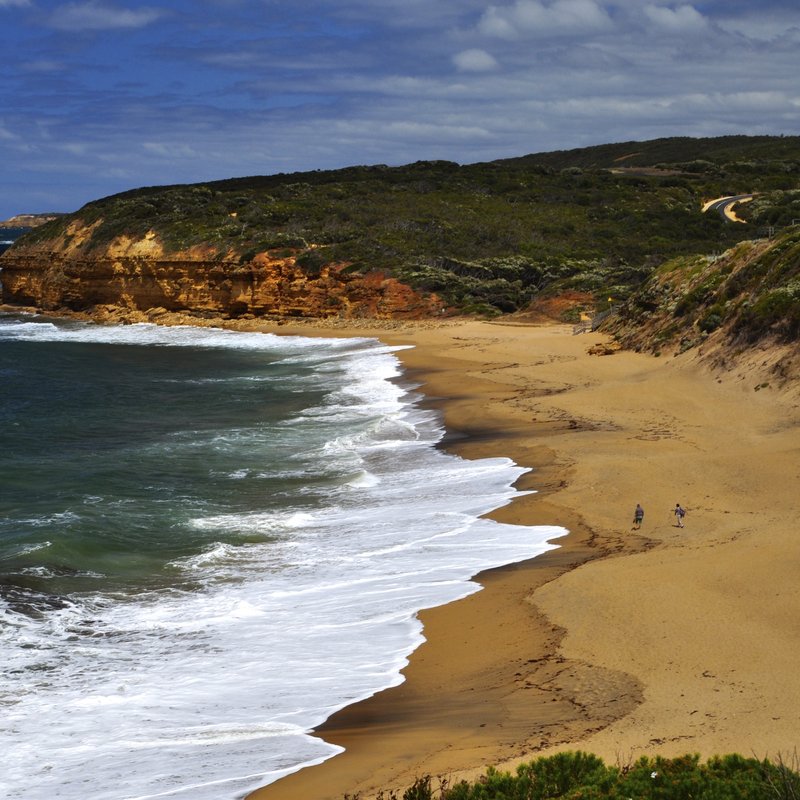 Bells Beach
Where: Victoria, Australia
Why this made our list: Besides being super scenic, it’s also home to the Rip Curl Pro -- the world’s longest-running surfing competition (since ’61). You know, assuming you’re an active beach-goer.
Bonus: Bells Beach is on the incredible Great Ocean Road, a 150mi stretch of Australia's southern coast. Also, there’s a nearby surf break called Boobs. Insert giggling here.