MIAMI (CBSMiami/AP) —  On his second day in South Florida, President Barack Obama used his annual hurricane briefing to warn about climate change and also made a significant stop before his departure.

The president departed from Miami, on board AirForce One, just before 3 p.m. headed to Washington, D.C.

Before the president's departure, he stopped at the shrine of Our Lady of Charity of El Cobre, the Roman Catholic patron saint of Cuba.

On Twitter, students at La Salle High School, near to the church, were on lockdown during the president's stop.

Earlier in the day, Obama was briefed on the hurricane season during a visit to the National Hurricane Center on Florida International University's main campus in Miami.

With the start of hurricane season Monday, the president highlighted the importance of preparedness.

"The best preparedness is the preparedness taken by individual families, " said the president while at the center.

He took a moment to talk about climate change and how it strengthens storms and flooding.

"The best climate scientists in the world are telling us that extreme weather events like hurricanes are likely to become more powerful," Obama said.

"The truth is we are better prepared than ever," he said.

He also mentioned Hurricane Sandy and said how climate change "might have made it stronger."

The president then called on Congress to work with the White House on dealing with rising sea levels.

"Miami, for example, already has to spend hundreds of millions of dollars to adapt its water system," said the president.

Freshman Miami Congressman Carlos Curbelo was also at the center during the tour.

Curbelo said earlier on Thursday he wanted the focus to be on preparing for hurricanes especially since it's been nearly two and a half decades since Hurricane Andrew and 10 years since the last hurricane, Wilma,  hit.

As for climate change discussions, he thinks it should happen more often.

"Climate change is important and it's something we have to prepare for  but today we're here for the hurricane season, which is always an important topic in South Florida," said Curbelo. "Anyone who takes an objective look at the data will recognize that...what we have to do instead of blaming each other and pointing the finger is start preparing for climate change."

Curbelo said he's outspoken on climate change which is a break from many of his fellow Republicans.

CBS4's Ted Scouten asked, "Are we seeing a rare moment here, a Republican and Democrat agreeing with the President on something?"

"The president has been to my district three times since the beginning of the year.  I'm going to recommend him some realtors because he obviously likes to visit," said Curbelo.

He said people here should prepare.

The president suggested if people want to prepare, they can learn more at www.toolkit.climate.gov.

As for the 2015 Hurricane season, government weather forecasters predicted six to 11 storms this season, with three to six of them developing into hurricanes. 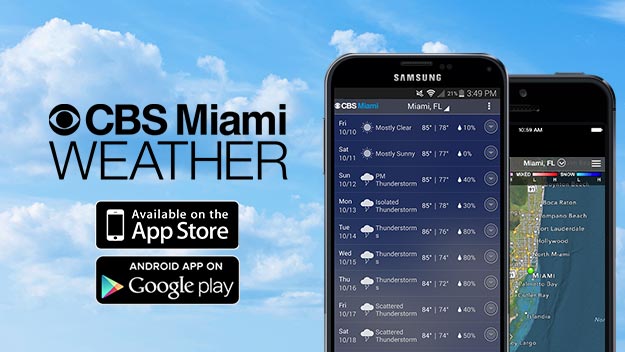 When it comes the Obama administration's efforts in climate change, it has acted to limit gas emissions from vehicles and power plants that are blamed for global warming.

But much of the president's climate change agenda has faced strong political opposition from the Republican-controlled Congress, along with a number of legal challenges.

On Wednesday, the president stopped by two homes in Coconut Grove for high dollar, intimate gatherings.  He met with a total of 90 people.  Each paid up to 33-thousand dollars to spend time with the commander in chief.

During his visit, White House officials said the president also met with the family of slain journalist Steven Sotloff. The South Florida man was killed at the hands of ISIS terrorists.

National Security Council Spokesperson Bernadette Meehan issued a statement on the meeting saying, "Today in Miami, President Obama had the opportunity to meet with Art and Shirley Sotloff, the parents of Steven Sotloff, and Steven's sister Lauren.  The Sotloffs live in Florida, so this was an appropriate occasion for the President to visit with them.  The President expressed his and the First Lady's condolences for Steven's death.  He appreciated the chance to hear from the Sotloffs more about Steven's work as a journalist, including his passion for bringing the stories of people who are suffering to the rest of the world in the hope of making a positive difference, including in Syria.  The President also recognized the family's "2Lives:  Steven Joel Sotloff Memorial Foundation", which was created to provide support and assistance to journalists reporting from conflict torn areas of the world."