In a letter to parents, Centner pointed to theories that have been debunked by doctors and the Centers for Disease Control.

"Tens of thousands of women all over the world have recently been reporting adverse reproductive issues simply from being in close proximity with those who have received any one of the COVID-19 injections, e.g., irregular menses, bleeding, miscarriages, post-menopausal hemorrhaging, and amenorrhea (complete loss of menstruation)."

"There's nothing infectious in the vaccine whatsoever and the type of immunity they induce in no way affects anything to do with someone's fertility," she said.

Centner is standing by her claims, saying not enough information on long-term effects.

Some argue Centner is pushing misinformation. The school owner said the misinformation is directed at the school that teachers and staff would be fired, if they got vaccinated.

"No one has been threatened to be fired," said Centner.

But in a conference video call with her staff, some could argue that's not what it sounds like.

Centner could be heard saying, "I have to draw a line in the sand today and tell you if you want to get, this is not going to be the right school for you." 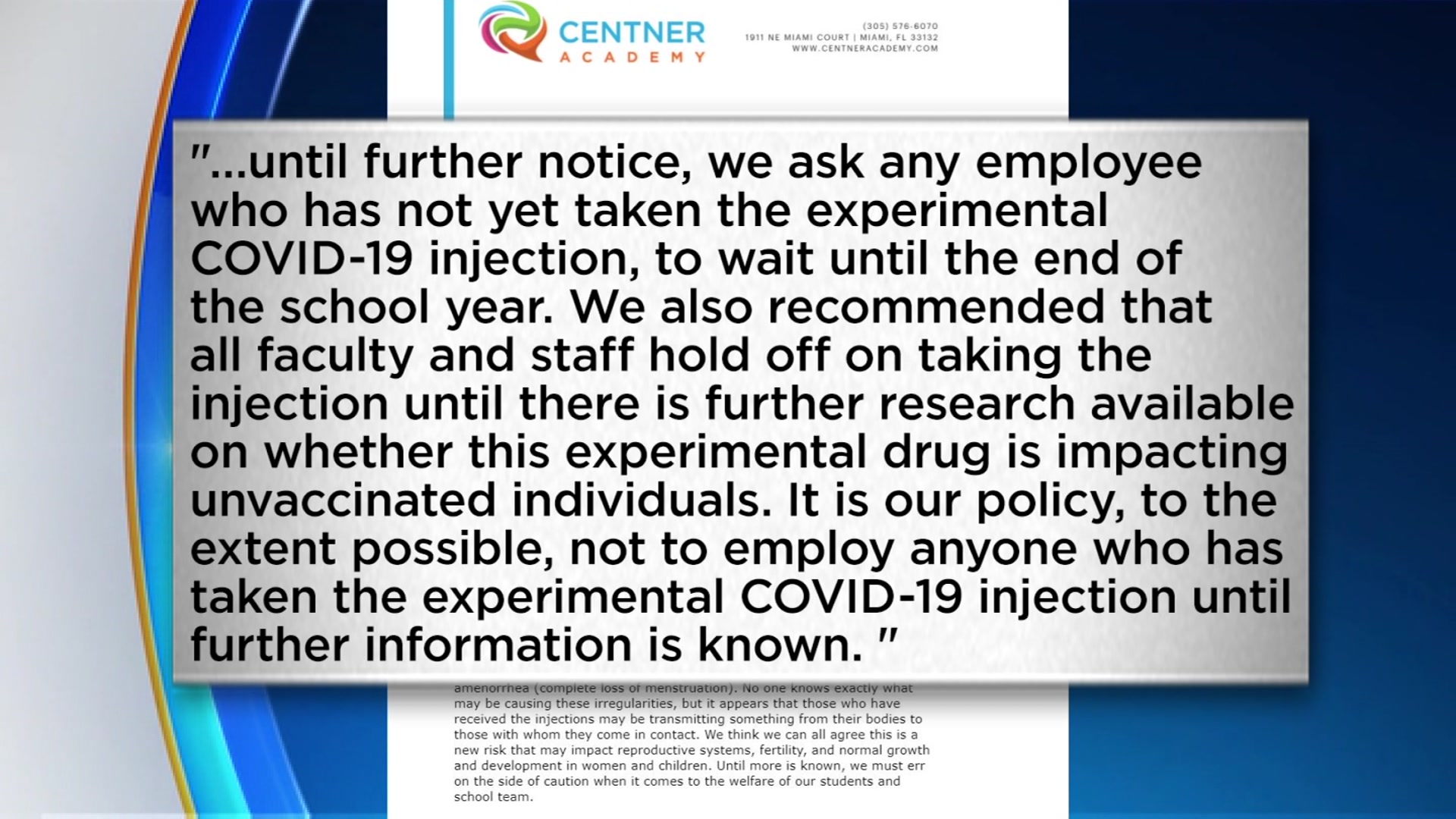 On Tuesday, Joshua Hills, who's staff at the school, wanted to clarify Centner's comments. He said teachers and staff who were vaccinated would be kept away from the children.

"We'll  give them other responsibilities, but will absolutely still be on the payroll," he said.

Hills said the school's policy is to wait and see if the vaccine is truly 100% safe. The administration points to the internet as one of its sources for calling for the academy's ban on vaccinations.

"We're just in the wait and see mode, to see what happens," Hills said. "And there's plenty of anecdotal evidence that's surfacing all over the internet that kind of lends to the contrary of what's circling the mainstream."

Hills also said the school is not "anti-vax," adding it's in favor of vaccines, but only the ones that have been proven.

News of the Centner Academy's policy has reached the White House.

Press Secretary Jen Psaki was asked if there's anything the administration could do relative to teachers being asked to choose between their health and their job.

"That's a good question in terms of helping the teachers. I'll have to check with the Department of Education. I'd send you to them as well, of course," said Psaki. "Obviously, our objective is continuing to convey that it's important to abide by public health guidelines, that they're in place for a reason, that they are not done through a political prism. They are done by medical experts, by health experts intended to keep children safe, keep parents safe, keep teachers safe, keep communities safe, which is why we recommend people abide by them."