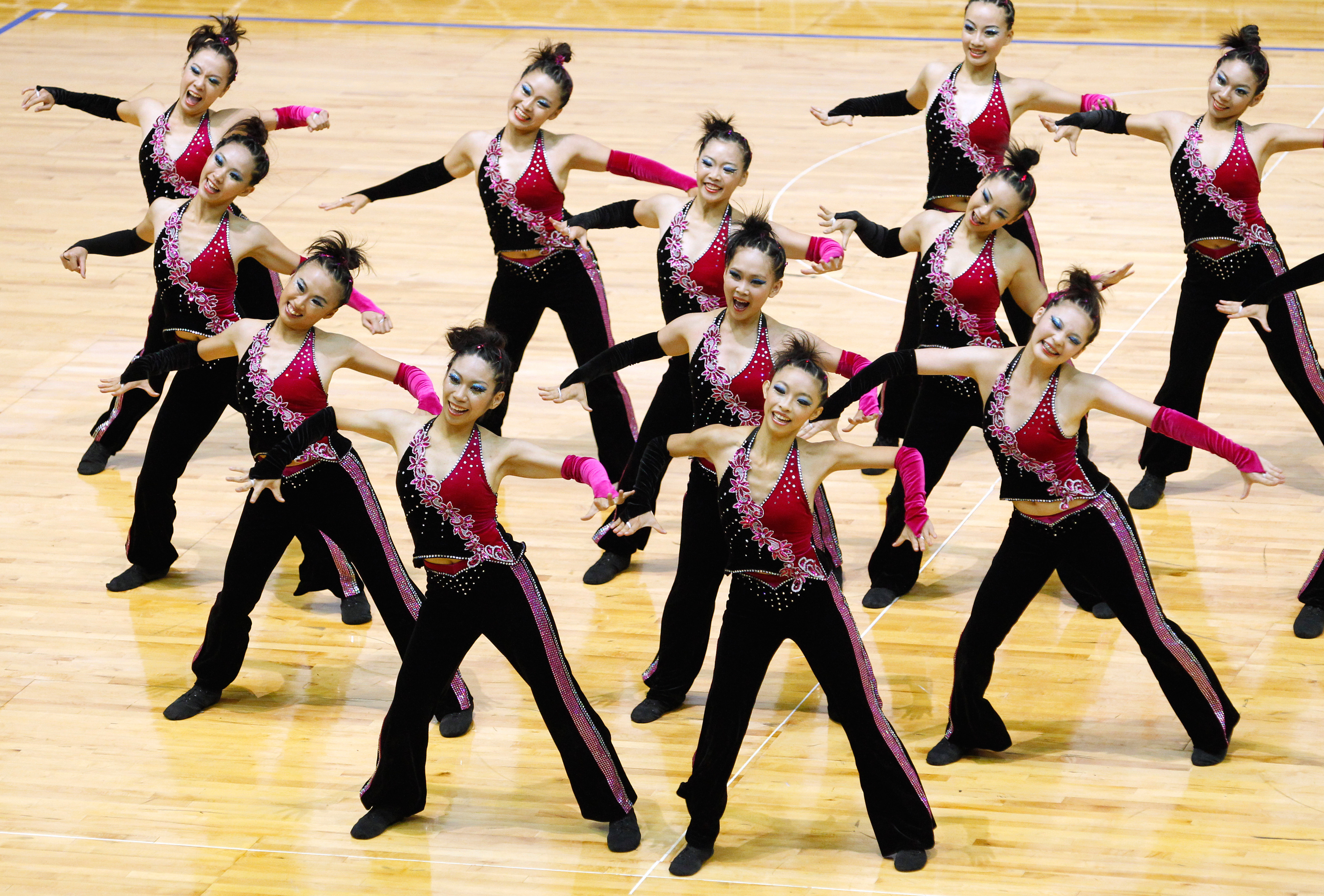 It's not out of the question. Last year, the Pole Fitness Association circulated petitions to get the dance form into the 2012 Summer Games. Alas, the IOC must have deemed pole dancing more Las Vegas than London because it did not make the cut. But the campaign goes on.

Pole dancing may still conjure images of strip clubs for many, but these days it's actually more about health clubs. The sensual dance is commonly called "pole fitness" or "vertical dance," and there are more than 500 pole dancing fitness studios across the United States.

"Nowadays there are very few who are training to perform in a strip club," Anjel Dust, an organizer at the California Pole Dance Championships, told LA Weekly last year. "It's all about fitness or competitions. There is no longer the stigma. I think pole dancing is being seen more as an art form."

That may well be true for Anjel Dust, but for now the IOC is standing firm. Pole dancing -- with its connotations of seedy night clubs and half-naked women - has been lobbying to be accepted into the Games for a few years now. Other than a name change, pole fitness (or vertical dancing) may have more work ahead to tone down its sexy past to make the Games.

Grace, power and precision. No, we're not talking about Olympic gymnastics (or pole dancing) but sheep shearing. At least that's the view of the Golden Shears, which hosts the world's largest sheep shearing and wool handling contest.

"Shearing has progressed from being a physically demanding and arduous farm task to being recognized as an elite sporting pursuit," the Golden Shears website declares. "There is something truly magical and inspiring watching the strength, grace, power and precision of an open shearing final."

According to the Associated Press, a New Zealand farm lobby group says sheep shearing has the potential to become an Olympic demonstration sport. The "time has come to elevate shearing's sporting status to the ultimate world stage," the New Zealand Federated Farmers said in a statement earlier this year, adding that the world's top shearers are "athletes who take it to another level."

New Zealand produces some of the world's best shearers and the Golden Shears receives substantial media coverage in the country. Other shearing countries include Ireland and Australia.

New Zealand hosted the world shearing championships in March, and Federated Farmers Meat and Fiber chairwoman Jeannette Maxwell said it was an appropriate time for the sport to press for wider international recognition.

"One way would be to make shearing a demonstration sport at a Commonwealth Games, if not, the Olympics itself," she said. And if the IOC won't listen to Federated Farmers Meat and Fiber pleas, then who will they listen to?

Choudhury says the focus is not on the mystical "om" but the physical pose. "I'm not trying to measure anybody's 'eight states,'" she said, referring the meditative and spiritual aspect of yoga practice. "The posture can be competitive."

Participants in the National Yoga Asana Championship (hosted by USA Yoga in March) were required to do a series of seven yoga poses in three minutes. Five were compulsory -- standing head-to-knee pose, standing bow-pulling pose, bow pose, rabbit pose and stretching pose. The participants were allowed to pick the last two poses themselves.

The poses show "how someone can have perfect strength, balance, flexibility in the body," Choudhury said.

Yoga pose competitions take place in India, where yoga originated, and elsewhere around the world. Choudhury took part in them growing up, as did her husband, Bikram Choudhury, founder of the Bikram Yoga form of hot yoga, which consists of a series of 26 poses done in a heated room.

She said the competitions can be a way to interest people in yoga who might be put off by the spiritual aspect, by showing them the athletic aspect.

What do Kristi Yamaguchi and Shawn Johnson have in common? Yes, they are both Olympic gold medalists. But they are known by millions more in the U.S. for something else: Both are "Dancing with the Stars" champions. (Olympian Evan Lysacek also competed on the show and finished second). With that kind of Olympic-dancing hybrid success, it stands to reason that competitive ballroom dancing should be a prime contender to be in the Games, right?

Not yet. But it's not for a lack of trying. First, the name "dancesport" was concocted to legitimize ballroom dancing as an athletic endeavor worthy of Olympic consideration. After years of lobbying, the International DanceSport Federation (IDSF) was finally recognized by the IOC as the sport's official representative body in 1997. However, subsequent efforts to include ballroom dancing in the 2008 Beijing Olympics and the 2012 London Olympics failed.

Still, ballroom dancing is as physically demanding as many Olympic sports and as the World DanceSport Federation points out, its seems to have all the ingredients coveted by the Games: "It has gender parity; it has so far been free of doping, it has a large audience world-wide, venues would be easy to find and the competition could easily be run over two days."

Given those criteria - and especially in light of the popularity of shows like "Dancing with the Stars" - it seems like ballroom dancing (dancesport, that is) will be scored by Olympic judges some day. Until then, we will have to settle for Len Goodman, Carrie Ann Inaba and Bruno Tonioli.

Quick: What sport was deemed "the healthiest" in a 2007 Forbes survey? It must be running. Nope, that time-honored pursuit of fitness finished eighth. How about swimming? That ranked No. 4. Cycling? A distant seventh place.

None other than squash was rated the healthiest sport on the planet, based on criteria ranging from cardiorespiratory endurance to muscular strength. Squash has made quite a racket to get into the Games - but to no avail.

The fast-paced, goggle-wearing sport just missed out on the 2012 London Games and had hoped to qualify for the 2016 Games but ultimately lost out to golf and rugby sevens.

Still, the crusade to get squash into the Olympics continues. As if being the healthiest sport wasn't enough, squash advocates have outlined other reasons. According to squash2016.info, the sport has some compelling arguments: it's played worldwide (175 countries), it's low-cost (a portable game requiring minimal space) and "it's the only sport which can boast world champions - men and women - from all five IOC-recognized continents."

Pretty convincing credentials. The sport has even unleashed a slick video outlining the sports' Olympic qualifications. As the narrator declares at the end of the seven-minute plea: "The time is right. And squash is ready."

In some respects cheerleading faces the same Olympic hurdles as pole dancing. First, many question whether it's even a sport. Then there's its reputation (in the U.S., at least) for spawning ultra-competitive teenagers - not to mention cheerleading moms who hire hit men to take out the competition.

Indeed the drama surrounding cheerleading sometimes overshadows the sport itself. If you need any proof of this, tune into TLC next month for the premier of "Cheer Perfection," a new reality show about the mothers behind competitive cheerleading.

And so it is with this baggage of pom-pom moms that cheerleading seeks to qualify for the Games. The International Cheer Union submitted a request for recognition to the Olympic Committee in 2010 but so far the efforts have failed.

But don't dismiss the athleticism of elite cheerleaders. They are top-notch gymnasts - and even world-class track and field stars. Last week, a cheerleader for the Atlanta Falcons nearly qualified for the Olympics -- as a pole vaulter.

But will cheerleading ever vault into the Olympics? Maybe not but it won't be lack for enthusiasm. In its official IOC application announcement, the International Cheer Union was probably the only Olympic hopeful to use two exclamation points!