LOS ANGELES (CBSLA) - Just one year after the U.S. Capitol building was stormed by a mob of former President Trump's supporters who were angry about a free and fair election that President Joe Biden won, the images of that day are still difficult for many to watch.

Memories of what happened, especially for those who were there, are still very fresh. 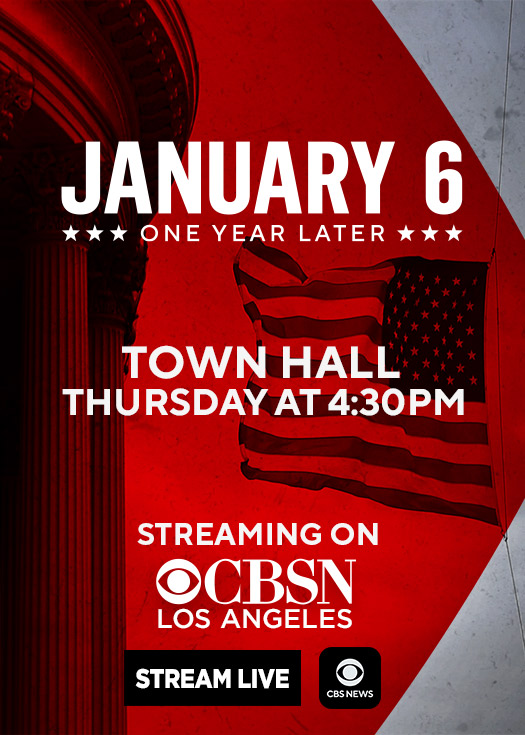 "Well, of course it's hard to believe that 12 months has passed, and I guess that's because for those of us on The Hill and maybe for many people around the country, it's still very present, what happened," Representative Karen Bass of Los Angeles, who was holed up in her office until the middle of that night, said.

Bass said that many of her colleagues, both members of Congress, as well as staff, continue to deal with the trauma of the Jan. 6 riots.

Burbank Congressman Adam Schiff was on the House floor when rioters breached the building. He said he received chilling warnings from his GOP colleagues that he might be targeted by protestors because of his high-profile roll in President Trump's first impeachment proceedings.

Though there was bipartisan condemnation of President Trump's behavior at the time of the insurrection, some in the GOP have now shied away from criticizing the former president, but not everyone.

California GOP Executive Committee Member Mario Guerra is one of them.

"We all thought, when we're watching this, 'Where's the president? Why isn't he coming out right now, please stop that.' We're seeing the texts from Ivanka and Donald Jr. saying, 'Meadows, get in there. He's got to say something.' So, I think everybody's urgency...so, it's mind blowing why he didn't do that," Guerra said.

There were also peaceful protestors at the January 6 rally and march, before the riot.

Southland resident Janet Fraser was in the VIP section where Trump spoke. She was among those who only protested and didn't breach the Capitol and is among the millions of people who still believe the false claim that the election was stolen.

"I watched the election get stolen in real time November 3," Fraser said.

The fallout continues with conspiracy theories and false claims about the truth of what unfolded that day, an effort by some to rewrite history.

"The fact that so many people are still describing it as something that didn't take place or have distorted so much what actually happened that it leaves your head spinning sometimes," Representative Bass said.

By many accounts, the incident is considered a reminder of just how fragile Democracy might be.

"I think many of us thought that it was one day, it would pass, but it's really been an ongoing effort to fight to protect our Democracy," said San Pedro Congresswoman Nanette Barragan. "We're hearing about elected officials still saying the election was stolen and still saying that it wasn't right to certify the election. And that is my greatest concern, is the concern that the narrative is still being played out and that we need to fight back against the misinformation."

Five people died in the attacks, including Capitol Police Officers who died subsequently by suicide. The House January 6 Committee is continuing its investigation.