DALLAS (CBSDFW.COM) - Most national presidential polls have put Democratic nominee Hillary Clinton in front of GOP nominee Donald Trump by as much as 15 percentage points. But the latest KTVT-CBS 11/Dixie Strategies Poll shows that the Lone Star State is holding onto its red reputation.

Data released on Thursday has 46 percent of likely voters across Texas casting their ballots for the divisive Republican candidate, if the election were held today. That overshadows Clinton by 11 points who has 35 percent support.  Of those surveyed, nearly 60 percent have a negative opinion of Trump while nearly 37 percent have a "very favorable" or "somewhat favorable" opinion of the New York real estate mogul.

Clinton is viewed "very unfavorably" or "somewhat unfavorably" by more than 66 percent of surveyed Texans. Clinton was found to be "somewhat favorable" or "very favorable" by 31 percent of surveyed Texans. "Rightly or wrongly, a lot of people simply don't trust her," stated CBS News contributor and former "Face the Nation" moderator Bob Schieffer last month.

The results were nearly the opposite among Hispanics, with Clinton getting almost 48 percent of the Latino vote in Texas over Trump's 32 percent. Trump established part of his campaign around building a wall between the United States and Mexico. In fact, during a campaign rally in Dallas this past June, supporters of Trump erupted into a "build the wall" chant.

The Republican candidate promised the crowd, "We'll build it, folks. We're going to have the wall."

Poll numbers were greatly in favor of Clinton when it came strictly to African American voters. More than 71 percent of blacks across the Lone Star State said that they would vote Clinton, while Trump only received about 13 percentage points among the minority group. Voters of other races also favored Clinton by just about three percentage points.

Clinton has slightly more support in the DFW area specifically, but Trump still holds a lead of greater than seven points. One prominent North Texan who will probably not be voting for Trump is Dallas Mavericks owner Mark Cuban, who has taken to Twitter to bash the GOP candidate and offer advice to Clinton's campaign. 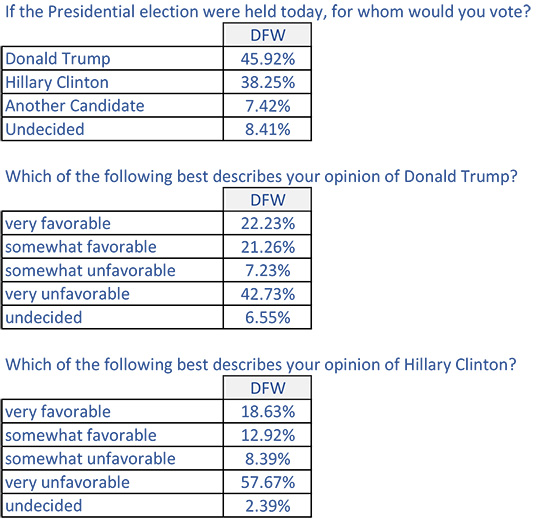 Just more than nine percent of the state's likely voters remain undecided, with about another nine percent ignoring both party nominees entirely and choosing to cast their ballots for other candidates. Pollster Brian Graham believes Trump will win Texas and if he runs a disciplined campaign he will get more than 50 percent of the vote here.

The KTVT-CBS 11/Dixie Strategies Poll was conducted on August 8-9 and includes the viewpoints of 1,018 likely voters across Texas who were contacted and surveyed over the phone. The results include 448 Republicans, 305 Democrats and 265 others. It has a 3.1 percent margin of error and a 95 percent confidence level.