DENVER (CBS4) - When it comes to winter precipitation in Colorado the type that comes to mind for most people is snow. Our high altitude allows a lot of snow to fall in our state, even during months of the year when the rest of the country would be shocked to see the white stuff. In addition to snow we can also see sleet, freezing rain and graupel, which is sometimes referred to as snow pellets. Rain can fall in Colorado during the winter but it isn't as common because we are usually too cold. 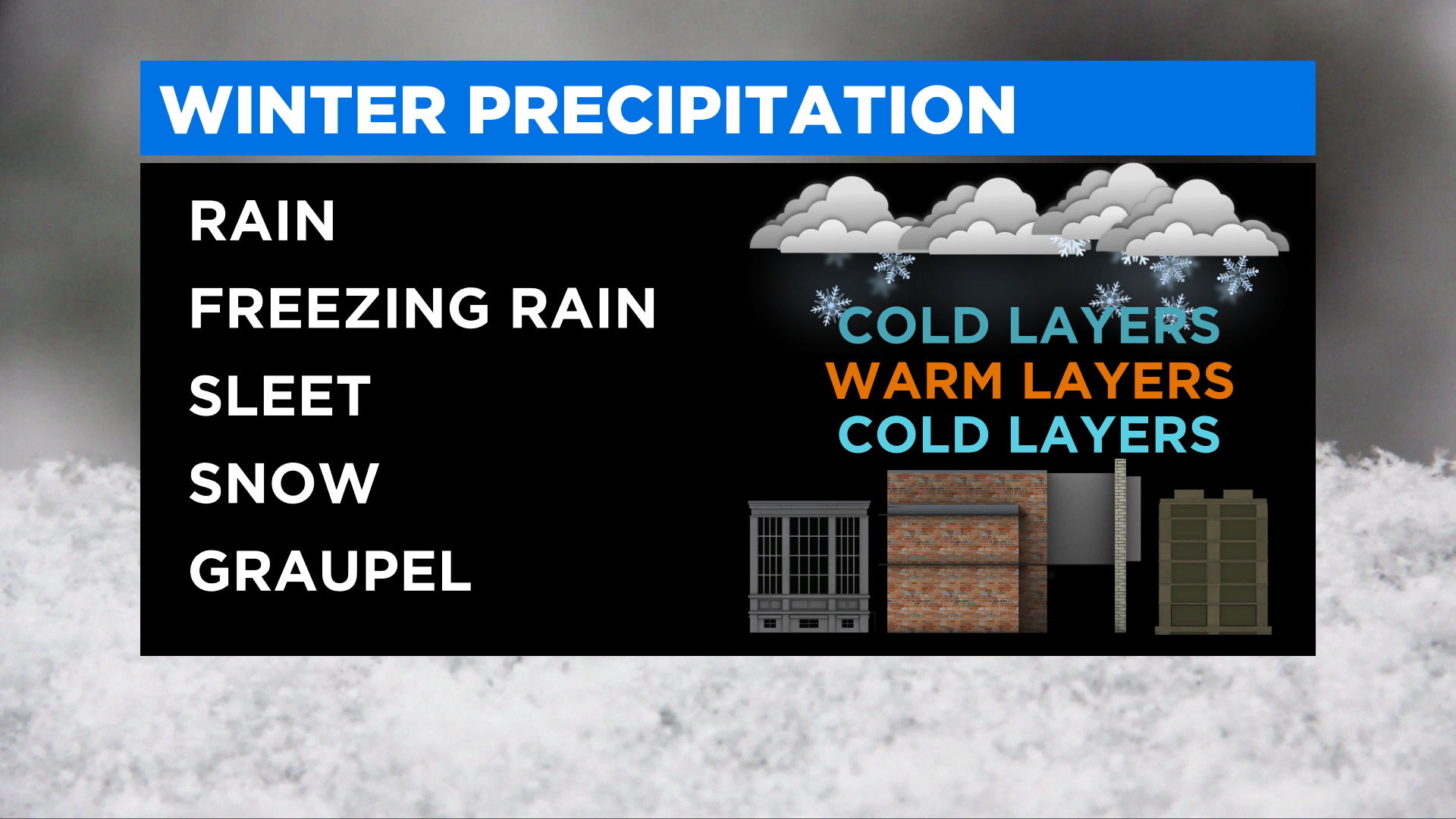 So what determines if we get something like sleet or freezing rain instead of snow? It's a complex answer that has a lot to do with the air temperatures found between a cloud and the ground.

Let's take the four different scenarios in the graphic below and examine them. In each case the precipitation that falls out of the cloud is snow. It will be helpful to pretend this is a single snowflake for demonstration purposes. 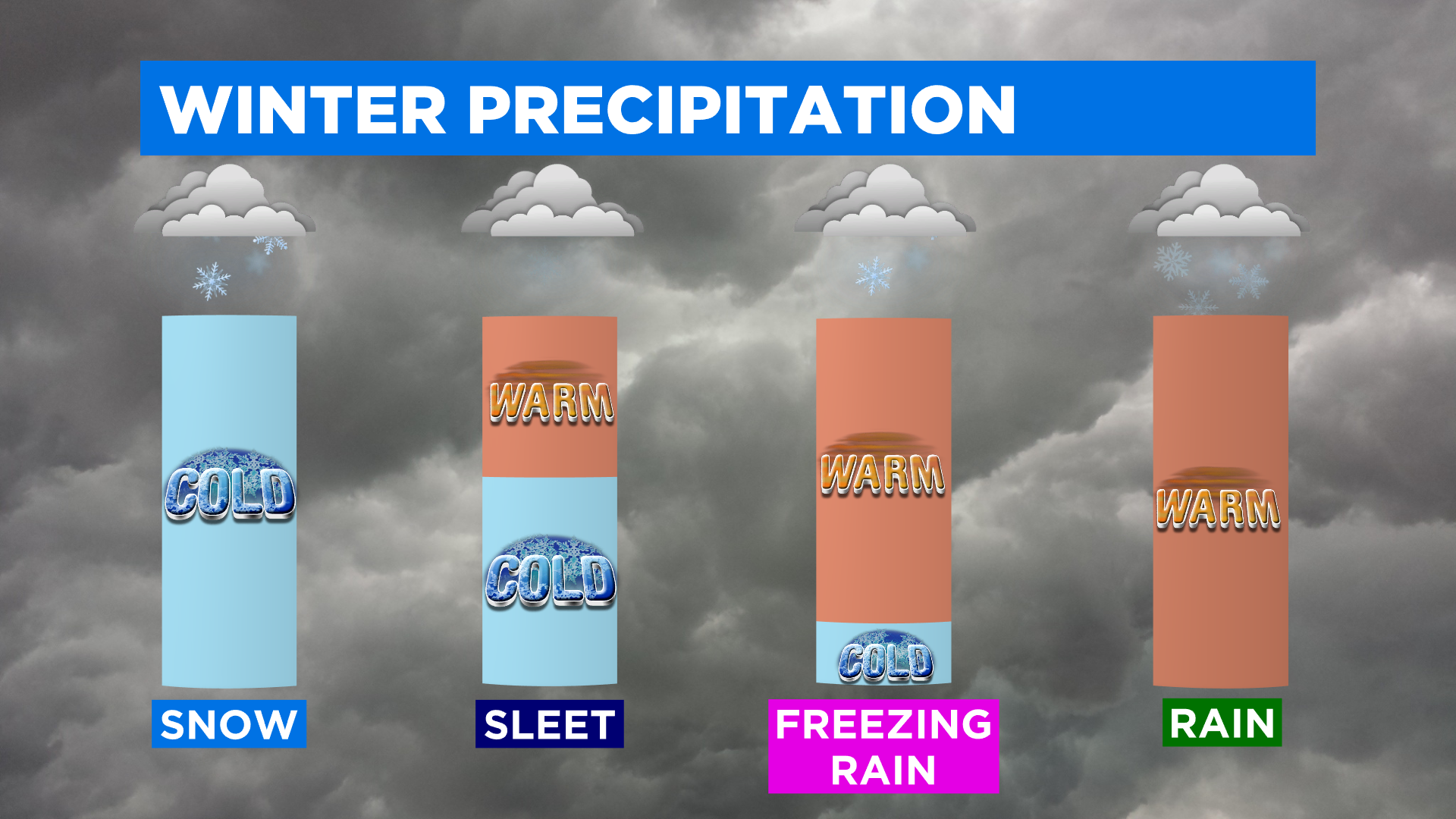 #Scenario 1 (snow) - The air between the cloud and the ground is so cold that the snowflake survives all the way down to the ground.

#Scenario 2 (sleet) - The snowflake leaves the cloud and falls through a fairly thick (deep) layer of warm air and completely melts. As it continues to fall (now a raindrop) it enters a layer of cold air that is deep enough for it to refreeze into ice. That piece of ice is called sleet.

# Scenario 3 (freezing rain) - The snowflake leaves the cloud and falls into a deep layer of warm air and completely melts, but then it enters a shallow layer of air just above that ground where the temperature is at or below freezing. Because the cold air is so shallow the melted snowflake does not have enough time to refreeze so it arrives as water, or rain. But since the air temperature at the surface is at or below freezing the rain drop will freeze on contact. This is called freezing rain and is most common in the eastern and southern parts of the United States. Freezing rain is quite rare in Colorado, but when it happens, it usually forms in a different manner. You can learn more about that in the link below.

RELATED: The Bergeron Process Will Help You Understand Why Freezing Drizzle Is Rare In Colorado

# Scenario 4 (rain) - The snowflake leaves the cloud and falls into a layer of warm air that extends to the ground. In this case the snowflake will melt and arrive at the surface as rain. 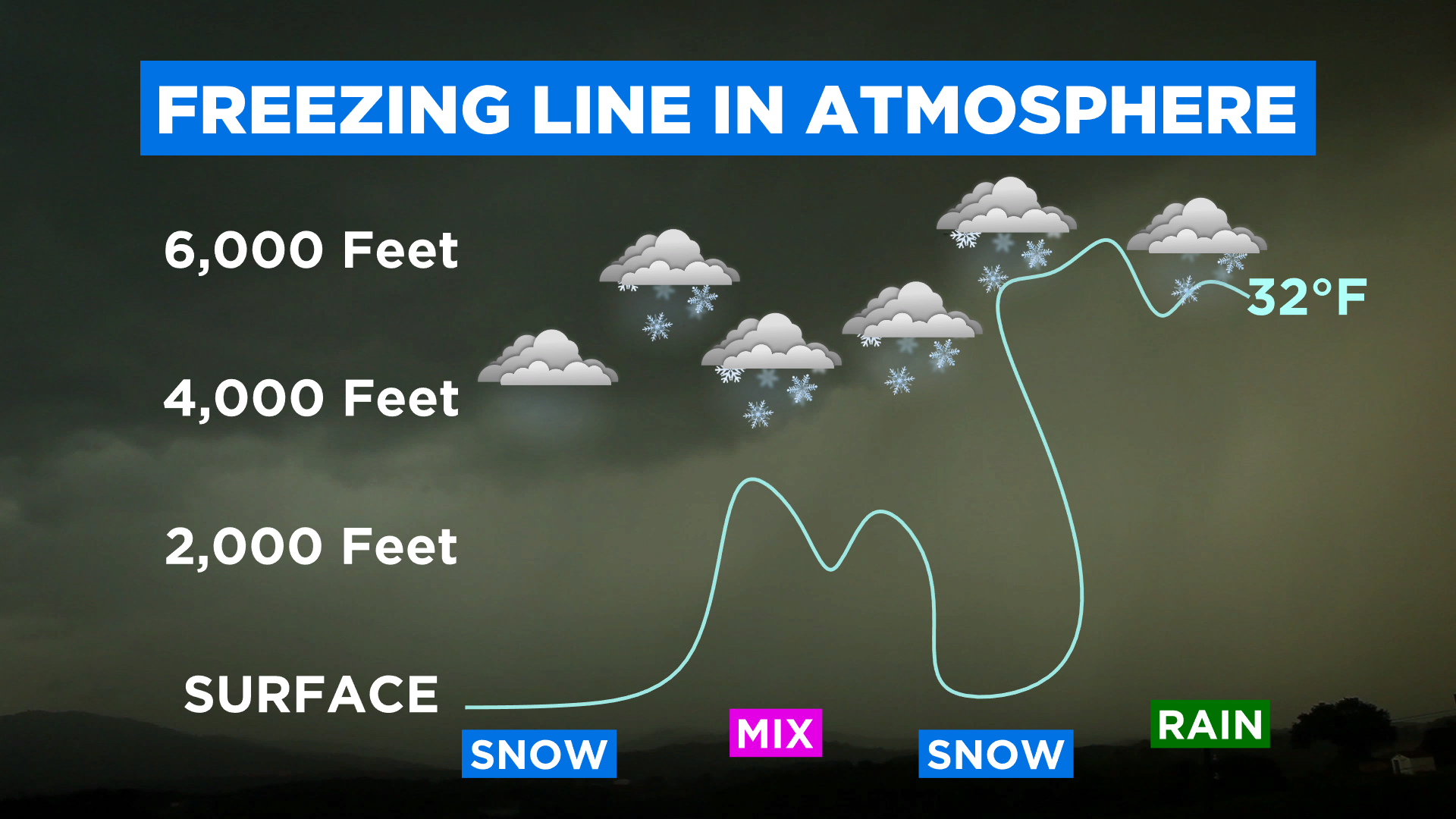 The image above is a pretend scenario to show you how the atmosphere can vary a lot over small distances, either due to terrain or something like the presence of a cold front. Find the freezing line which represents where the air is 32°F or colder. On the left it is down to the surface and people living there are receiving snow. On the right it's still 'the warm before the storm' with a freezing level that is several thousand feet off the ground. People living there are receiving rain.

In the middle, where the freezing line is all over the place, the atmosphere is in a state of chaos and a variety of precipitation types are being experienced. This is most likely happening in the vicinity of a strong cold front pushing through. This often happens along the Front Range as a winter storm moves in and it creates a lot of wild weather over a short period of time and over short distances.

While there are thousands of weather stations on Earth the amount of data above the ground is very limited. We only get this information by releasing weather balloons twice a day from about 1,300 locations worldwide. There are two sites in Colorado that launch weather balloons each day and less than 100 in the United States.

By the way, I never addressed graupel in this lesson but I did mention it. We learned that sleet basically forms in mid-air as a snowflakes melts and then refreeze on the way down to the ground. Graupel is more like hail, which forms inside of a cloud, as a snowflake becomes coated with liquid water that freezes on contact, forming a little pellet or ball. We candidly refer to graupel as dippin' dots sometimes because the shape resembles the tasty treat.