DENVER (CBS4) - Thunderstorms could arguably be one of nature's most visual forms of weather and there is no shortage of them on Earth. There are some estimates of close to 2,000 happening each day on our planet. Most of these develop in the tropics and sub-tropics, between 0 and 30 degrees latitude. 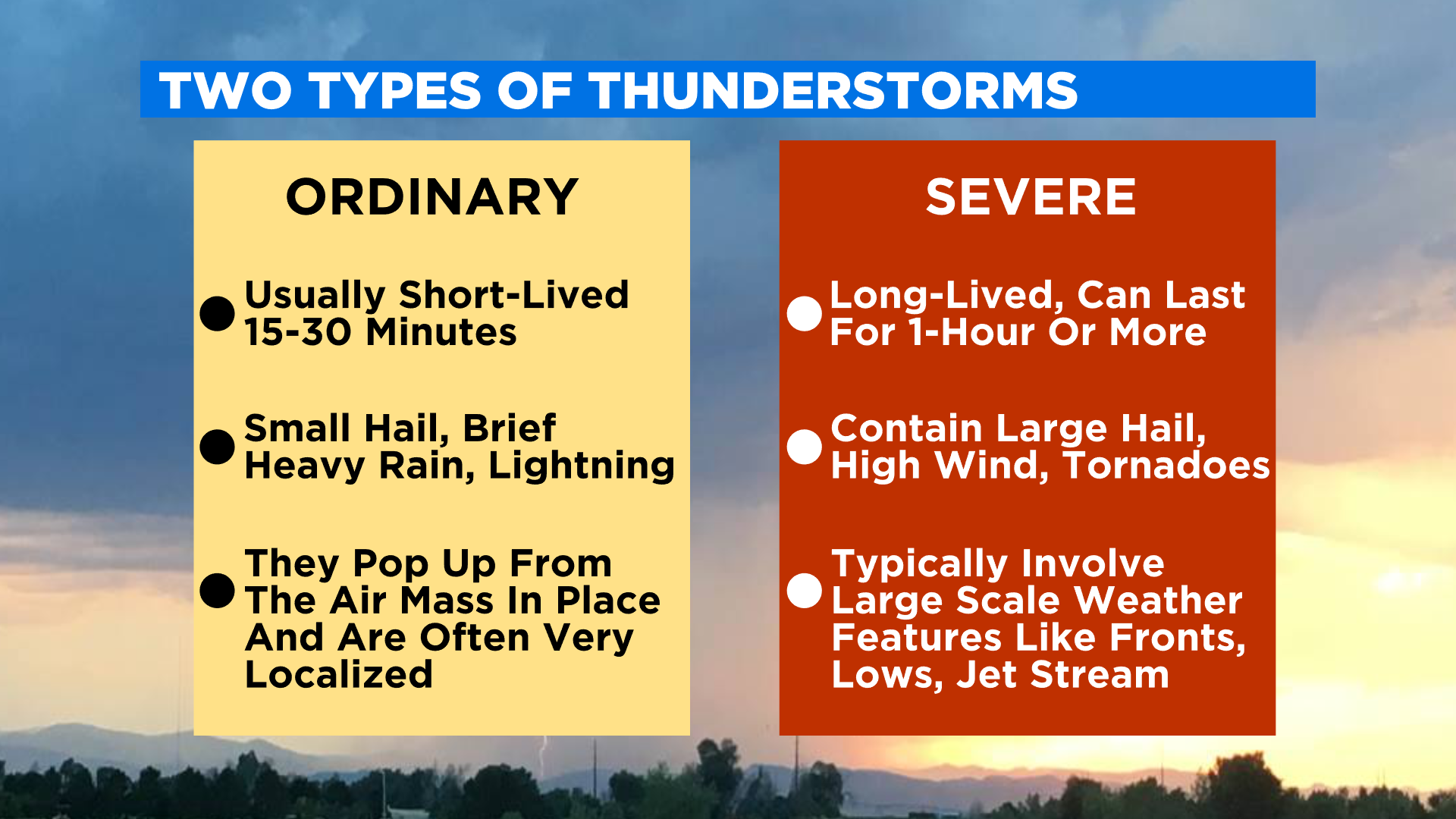 While each thunderstorm is unique they can be classified into two basic types. The first is the ordinary thunderstorm, which is short-lived and caused by the air mass in place, hence why they are sometimes referred to as air mass thunderstorms. All you need to get one to form is some warm and humid air that is rising, and our air rises each and every day due to convection created by solar heating.

Ordinary thunderstorms have three stages. The first is called the updraft stage and features a rising motion of air from the surface. During this stage an observer from the ground will see clouds that are gradually growing in size and height. As the clouds grow there are precipitation building processes that are taking place inside. 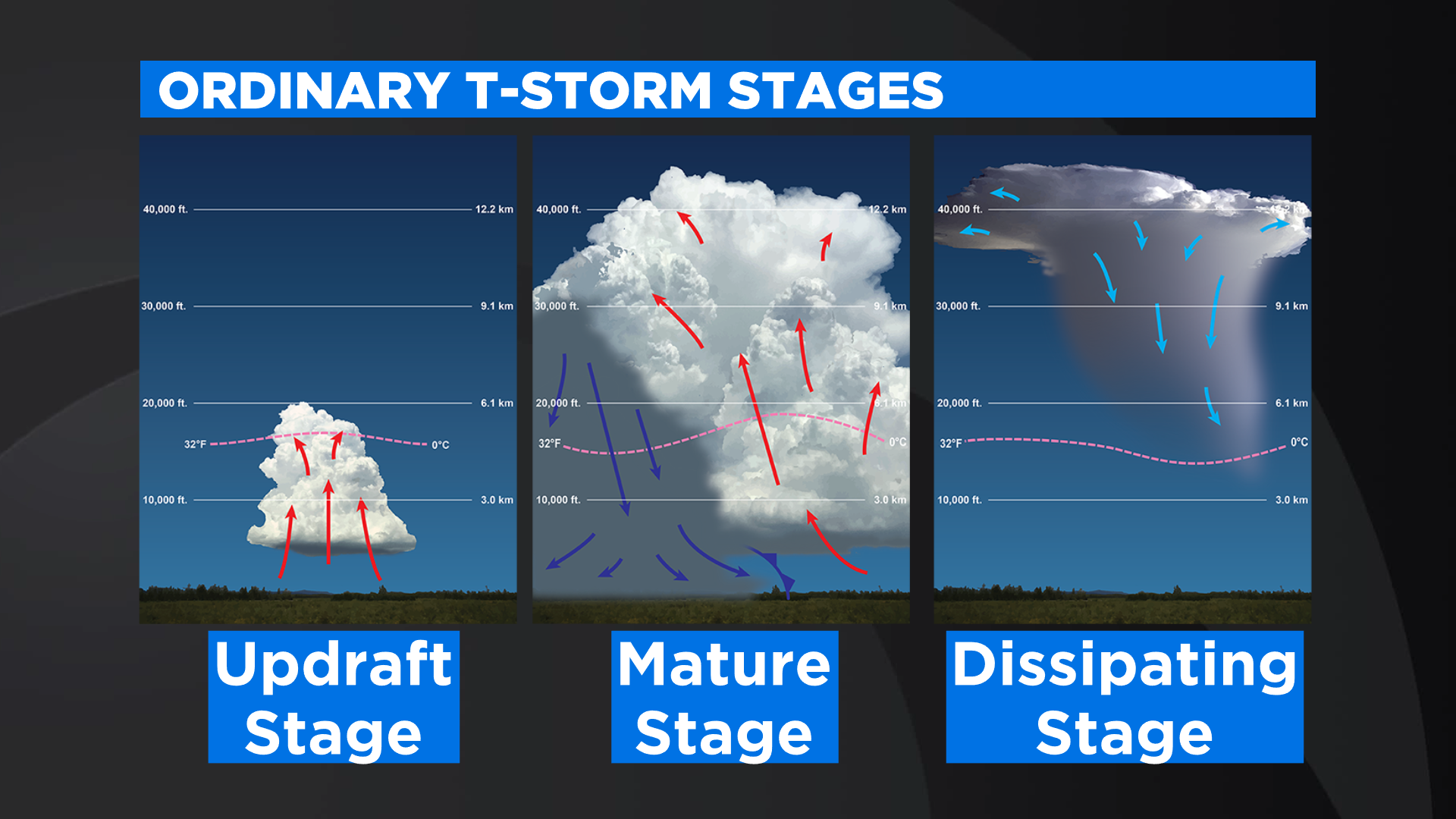 Once the precipitation inside the cloud becomes big enough to overcome the updraft keeping it suspended inside the cloud it will fall to the ground. This is when we enter the second stage of an ordinary thunderstorm, which is called the mature stage. At this point we have warm, humid air feeding the storm in the updraft and rain or hail falling out of the cloud in the downdraft.

The downdraft also includes cooler air sinking to the surface. When it hits the ground it spreads out in all directions creating gusty winds at the surface known as a gust front. (it is like a small scale cold front)

Once the downdraft forms the outflow winds at the ground will soon cut off the updraft and cause the storm to enter the third and final stage which is called the dissipating stage. At this point the updraft feeding the storm has been cut off and there is nothing left but the downdraft. With no warm, humid air flowing in to sustain the storm it will quickly die off. This entire process only takes about 15 to 30 minutes which is why an ordinary thunderstorm has such a short life span. 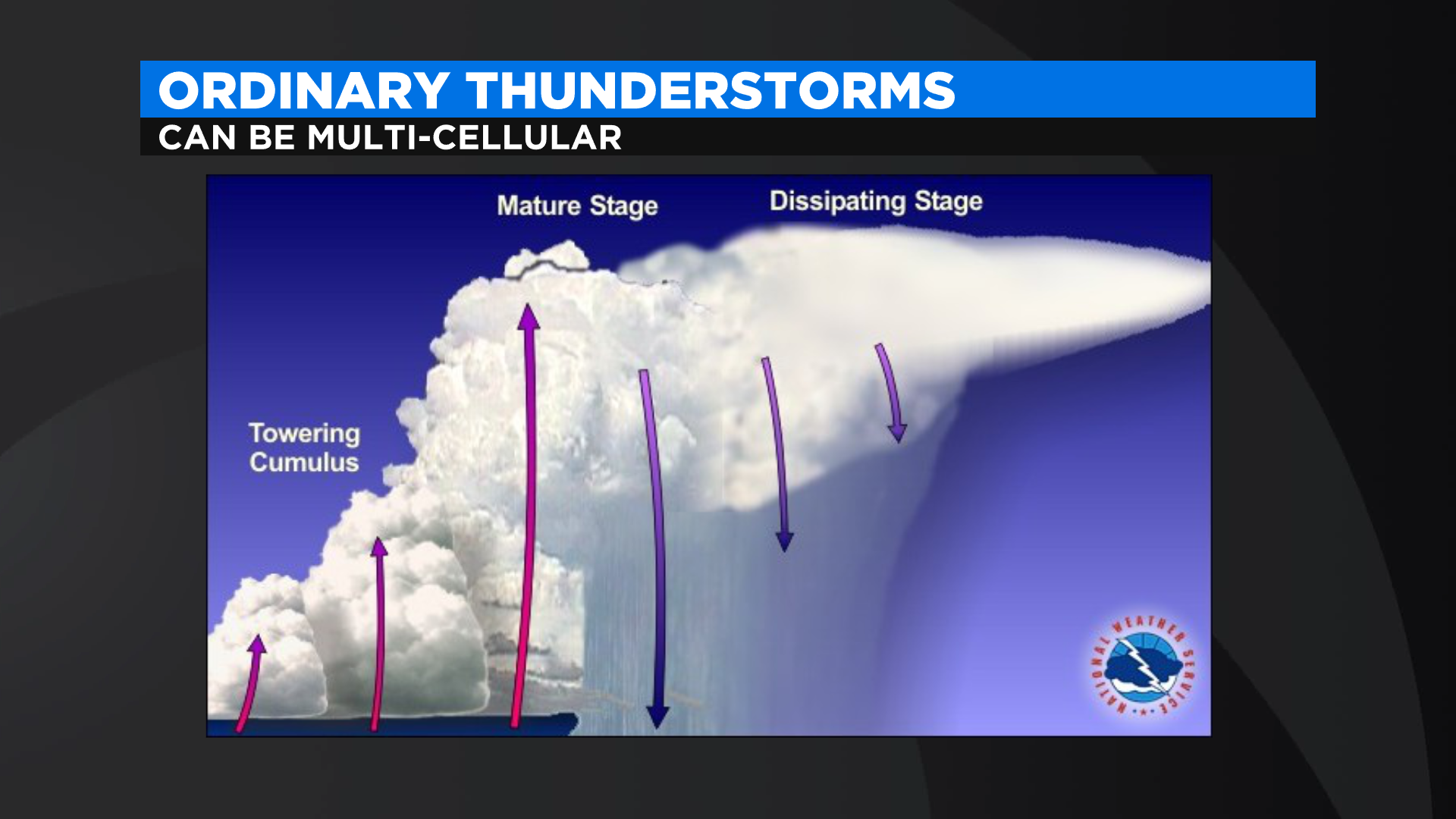 The main differences between an ordinary storm and a severe storm is the big weather picture involved and the type of weather produced on the ground. Ordinary storms pop up simply because of the air mass in place combined with daytime heating. But a severe storm will often times have other larger scale weather features at play, such as a large-scale cold front at the surface and a strong jet stream overhead. 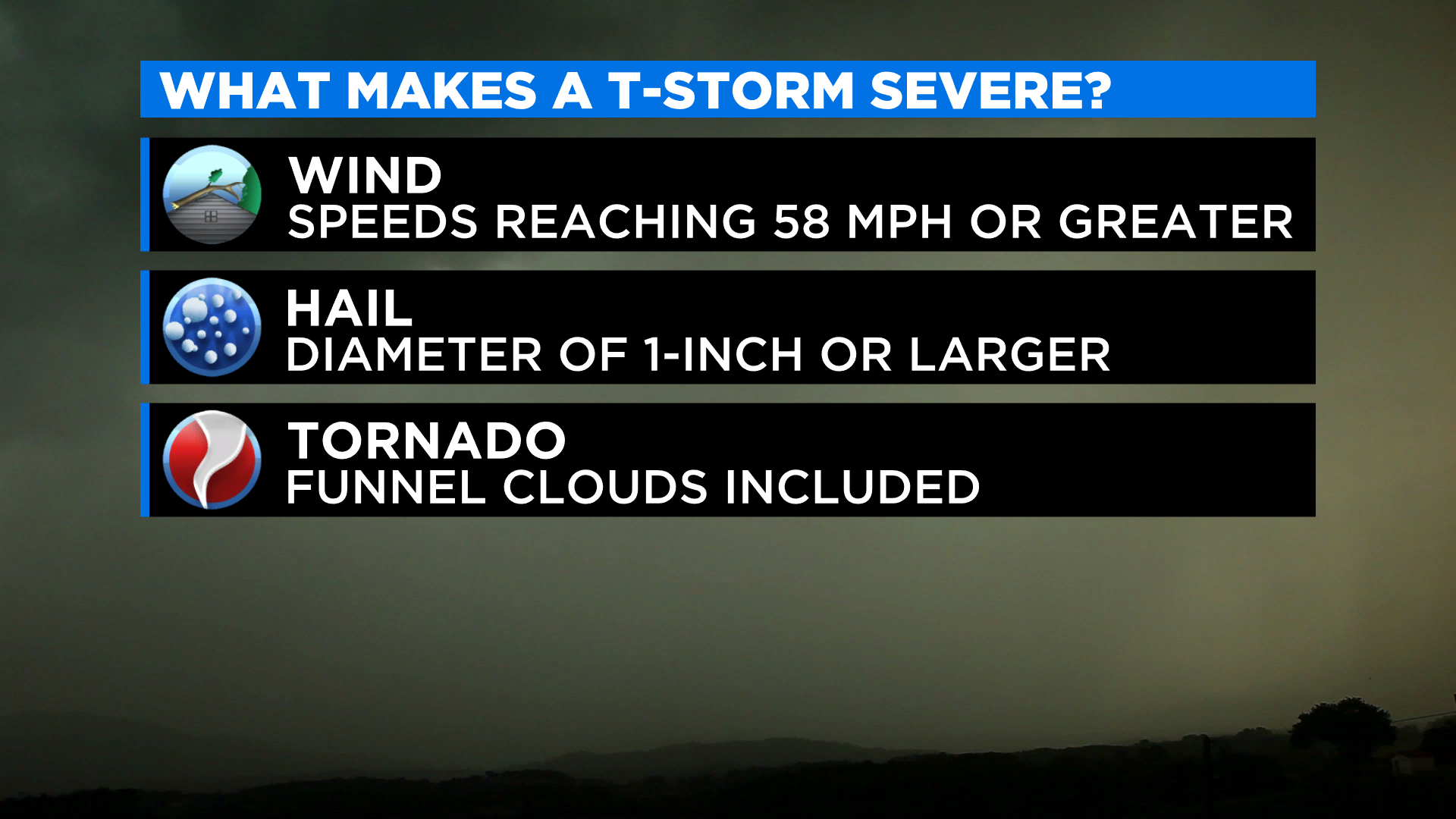 Severe thunderstorms have wind shear present, which is where the wind speed and direction changes with height as you go up from the ground. Wind shear is what causes a thunderstorm to rotate. The stronger the wind shear is the more lean a storm will have and this is important because that helps to keep a storm's updraft and downdraft separate, which plays a role in giving the storm longevity. (recall in the ordinary storm where the downdraft cuts off the updraft in a matter of 30 minutes or less in most cases) 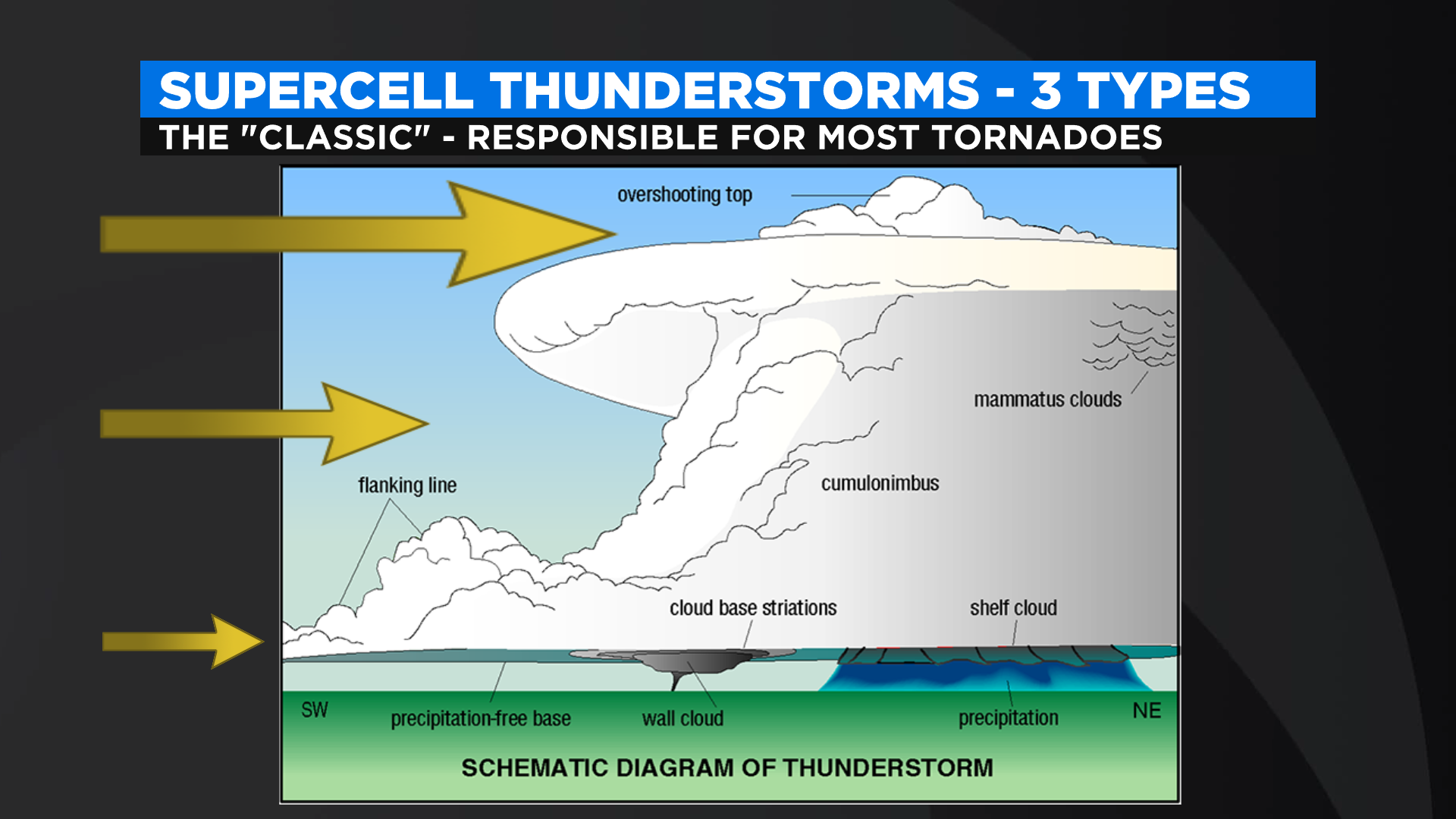 The other two types of supercell thunderstorms involve a description about the precipitation. Storms in a very dry environment like Colorado are called LP or low precipitation. They produce more wind and lightning than anything else, but can produce large hail and tornadoes. Rainfall is usually minimal. LP supercells are a storm chaser's delight because they allow for incredible views of the storm's structure due to the lack of precipitation.

In more humid environments supercell thunderstorms can produce so much rain that it is hard to see the storm itself, and if there is a tornado involved it can be rain-wrapped and nearly impossible to see. These are called HP or high precipitation supercells. They can produce flash flooding in addition to other hazards like large hail and tornadoes. 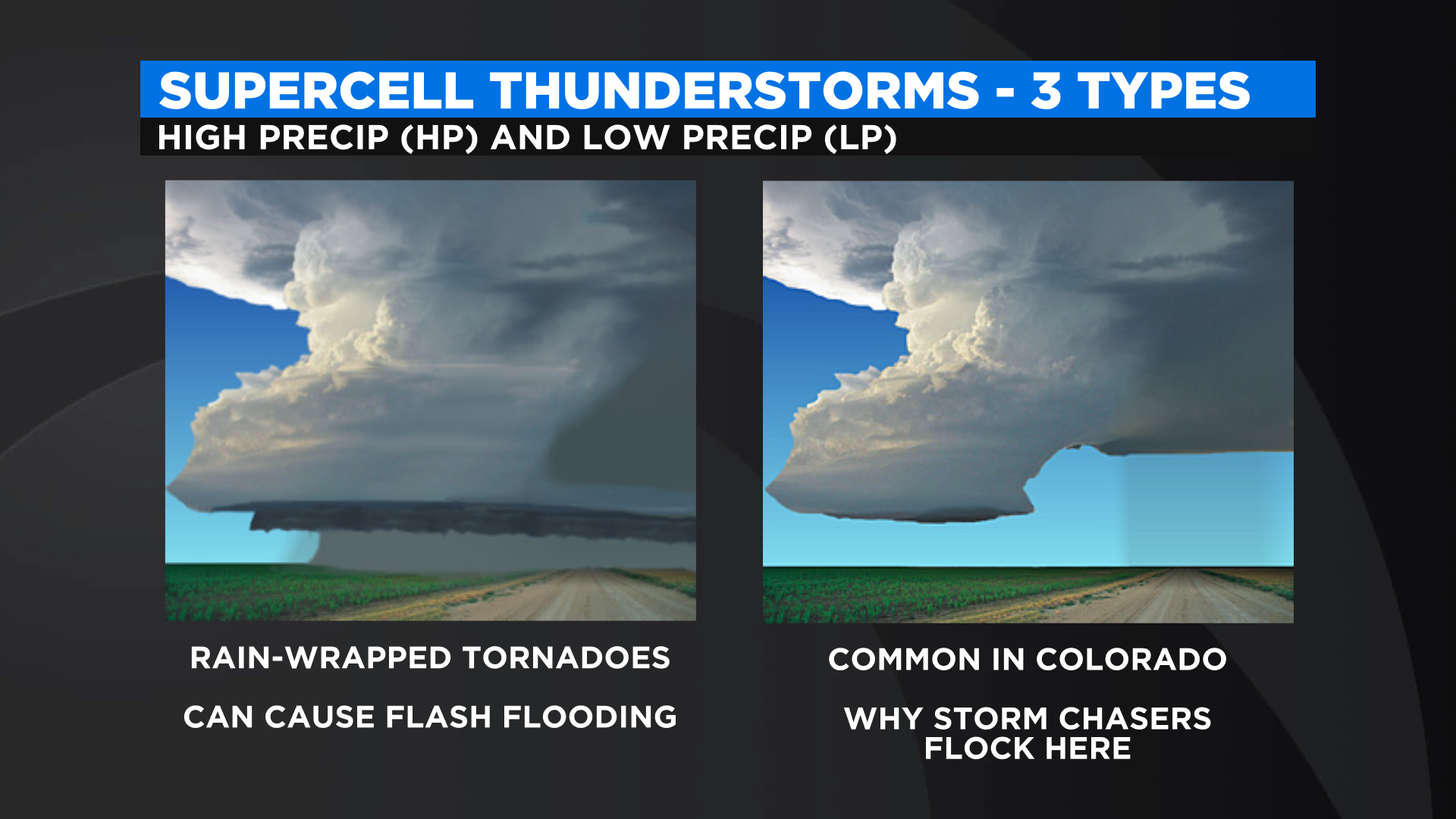