DENVER (CBS4) - It's hard to believe that it has already been a year since a powerful mid-latitude cyclone exploded with record strength over the plains of eastern Colorado. The storm produced blizzard conditions for more than 10 hours and left some places with a foot or more of snow. It even caused problems in the air with a passenger jet experiencing severe turbulence and a near mid-air stall about 100 miles east of Denver.

The low pressure reached a status called 'bomb cyclone' which isn't common for a storm system over land. Bomb cyclone status is achieved when the barometric pressure in the center of a storm drops by more than 24 millibars within 24 hours.

As the storm gained strength east of Pueblo it set a new record low barometric pressure for the state of Colorado in the town of Lamar. The new record of 970.4 millibars on March 13, 2019 broke the previous state record low of 975.0 millibars, which ironically, was also recorded in Lamar on March 13, but in the year of 1973.

Other new record low barometric pressure readings set during the storm include... 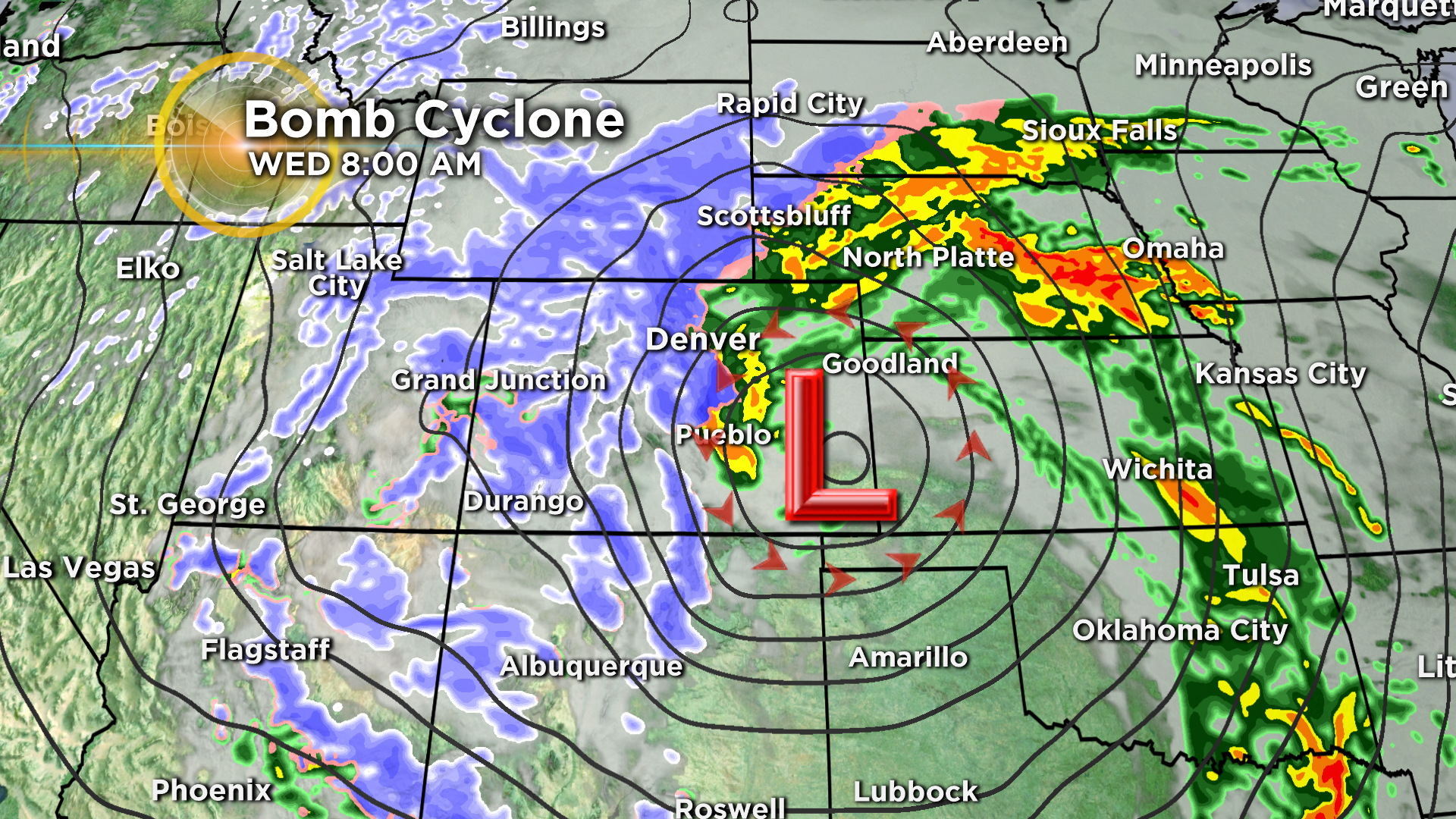 With such an intense area of low pressure the wind it produced also reached record levels. The highest gust in the state during the bomb cyclone was measured at Colorado Springs when a gust hit 96 mph. That smashed the previous all-time record gust in Colorado Springs which was 80 mph set during a windstorm on January 9, 2017.

Other new all-time wind gust records set during the bomb cyclone include...

Meteorologists at the National Weather Service in Pueblo believe that wind gusts were probably higher to the east of Colorado Springs but unfortunately there are no weather stations in eastern El Paso County.

Just to the east of Denver a weather station 5 miles north-northeast of Byers reported 2.45" of precipitation which set a new record for the highest daily precipitation ever recorded during the month of March. Snow drifts  in the area were anywhere from 5 to 10 feet tall.

The storm caused widespread travel problems with numerous road closures, including all major highways in and out of Denver, such as Interstates 76, 70 and 25. Nearly 1,400 flights were cancelled at Denver International Airport with thousands of passengers stranded inside the terminal.

Numerous trees and power poles were blown down with nearly 450,000 people without power at one point. Many school and businesses were closed the day of and after the storm. A Colorado State Trooper was killed northeast of Denver along Interstate 76 while investigating an accident.

The National Weather Service in Pueblo took the time to produce detailed analysis about the historic storm and you can read that by clicking here.