CHICAGO (CBS) -- For only the eighth time since the start of the year, the temperature will reach above 40 degrees on Friday. It's a hopeful sign that the end of this brutal winter is near and makes it a good time to look at the four worst winters in Chicago.

2013-2014: This season will be remembered for its relentless combination of snow and cold.

Unlike the other winters on this list, Chicago didn't have a huge snowstorm. It just had a lot of it.

The National Weather Service also totals "seasonal snow," which is measured between July 1 of the previous year to the end of June of the current year. By that measure, this season so far ranks No. 4 with 75.2 inches. (No. 3 is 77).

A few other measures of the cold set or equaled records.

There were 26 days where the low temperature was zero of below, breaking a record set over 100 years ago.

1978-1979: Many Chicagoans who were here in the late 1970s would argue that those years were the harshest ever.

That season can be best defined by an extremely brutal month of January.

The snowstorm that struck Chicago on Jan 13-14 is remembered for costing Mayor Michael Bilandic his bid for re-election after the city blundered its snow-clearing efforts.

Between 7 and 10 inches of snow were already on the ground, after an earlier blizzard the previous New Year's Eve. More snow began to fall with a vengeance on the night of Jan. 12, and it kept piling up until 2 a.m. on Sunday, Jan. 14.

The new snowstorm alone topped out with 18.8 inches on the ground.

There were also 14 days at or below zero that month. The average temperature for that meteorological winter was 18.4 degrees, ranking second all time.

A seasonal total of 89.7 inches of snow were recorded, easily the most ever.

1977-1978: Perhaps the narratives behind that year aren't as strong as the following year, and people sometimes overlook the misery of this season.

It was also more difficult for people to deal with the snow back then.

Cars did not have the traction and technology they do today.

While personal snow blowers had been on the market for years, they weren't very powerful and didn't perform anywhere near the way they do now.

Starting in the early morning hours on Jan. 26, the blizzard began dumping snow at a rate of 2 inches per hour. Wind gusted to 53 mph, as snow drifted 6 feet in some areas. When it was all over, there were 23 inches of snow on the ground.

Thousands of people spent the night in hotels, hospitals and fire stations. There were thousands of cars, trucks and CTA buses abandoned and left in the snowbound streets and on the expressways.

More snow fell over the next 10 days, grinding cars, buses and air traffic to a halt.

Sixty deaths were attributed to the storm – mostly heart attacks caused by shoveling snow – but one young girl was accidentally shot and killed by police who were trying to take down looters, according to the Chicago Public Library. A total of 273 looters were arrested.

That year was not especially cold, with only 2 days at or below zero. The average for a season is around seven. The average temperature was 26.5, which is normal for winter here.

Honorable mentions: 1903-04 was the coldest winter on record with an average temperature of 18.3 degrees; 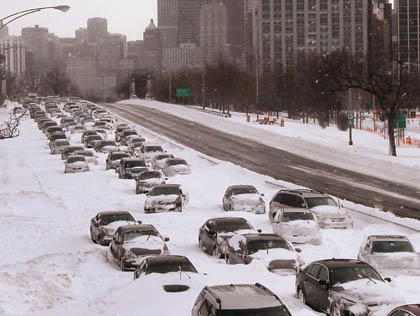 The Groundhog's Day storm of 2011 is best known for forcing dozens of motorists to leave their cars stranded on Lake Shore Drive during the rush hour storm. A total of more than 20 inches fell that day.