CHICAGO (CBS) -- Last year Peter Mendez tearfully told his story of police wrongly raiding his home and pointing guns at him and his family. Now he is thrilled because Gov. JB Pritzker signed the Peter Mendez Act this week.

It's a new law to protect kids and is the result of a CBS 2 investigation.

CBS 2 Investigator Dave Savini surprised the 11-year-old with the news. 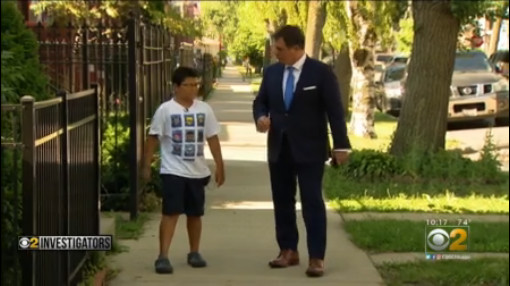 The happy, smiling Peter was very different than when Savini first met him exactly one year ago to the day.

Then he and his family talked about how police burst into their home with weapons drawn, pointing guns at them all, including Peter and his little brother Jack.

It was the wrong home, and their case led to a CBS 2 investigation into police repeatedly raiding wrong homes, case after case, cuffing innocent people and traumatizing families -- especially children.

"I think it's blatant disrespect and disregard for the emotional well being of our children," said Sen. Jacqueline Collins of the 16th District.

Collins sponsored the legislation requiring police training on how children experience trauma by police actions and training on de-escalation tactics for when children are involved.

It's a dream come true for the sixth grader after dealing with sleepless, nightmare-fill nights and a post-traumatic stress disorder diagnosis.

"We can't have this," Mayor Lori Lightfoot said in response to the investigation.

She wants wrong raids and mistreatment of children to stop.

"So we're going to dig down, look at these specific incidents," she said. "See what we can learn from them and try to, as best we can, not to repeat those kinds of mistakes."

Chicago Inspector General Joe Ferguson also responded, saying, "Every single one of these raid situations is a form of imposition of trauma by the government on citizens of the city."

He launched a full scale probe into the methods Chicago Police are using to obtain and execute search warrants.

The officers who raided Peter's home are being investigated by the Civilian Office of Police Accountability. That, along with the new Peter Mendez Act, gives him hope for change.

"There's going to be justice for the community and everybody who has ever felt wrong raids," Peter said.

Despite a year of repeated requests, the Chicago Police Department continues to refuse to turn over records related to wrong raids and has refused to turn over key body camera videos.