(CBS) Evan Rodriguez showed plenty of versatility at Temple, lining up as an in-line tight end, a wing back, a slot back, a fullback, and primarily as an H-back. When the Bears drafted Rodriguez, general manager Phil Emery envisioned him being a "move tight end" in their offense. A player that forces a defense to remain in their base personnel, instead of going into a sub-package, who can capitalize on a match-up against a linebacker.

While Rodriguez didn't show up on the stat sheet this past Sunday - the one screen pass attempt to him fell incomplete - he made several key blocks that resulted in first downs and points for the Bears on Sunday. Using NFL Game Rewind, I break down a few of these key plays in my playbook.

The first play comes with 9:56 to go in the first quarter, with the Bears trailing 7-0. The Bears have the ball 2nd-and-10 from their own 33-yard line, and line up in "Regular" personnel (2 RB, 2 WR, 1 TE) with Rodriguez as the fullback in an I-formation. The Colts counter with their base 3-4 defense, with strong safety Tommy Zbikowski walking into "the box" (shown in green), creating an 8-man front: 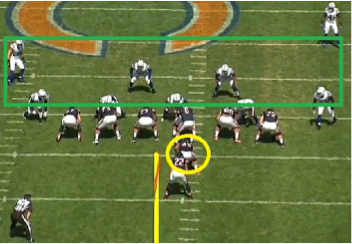 The Bears run a stretch play to the left, Kellen Davis blocks down on the 5-technique (defensive end lined up over the offensive tackle), and guard Chris Spencer and tackle J'Marcus Webb pull to the left. Spencer throws a perfect cut block on inside linebacker Kavell Connor, Webb seals off Jerry Hughes on the edge, Alshon Jeffery locks up cornerback Jarraud Powers, leaving only Zbikowski to make the play: 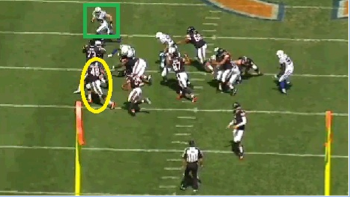 Rodriguez lays a perfect open-field cut block – a lost art in the NFL - on Zbikowski, giving Forte a huge lane on a momentum building 32-yard run, setting up a Bears first down at the Colts 36-yard line: 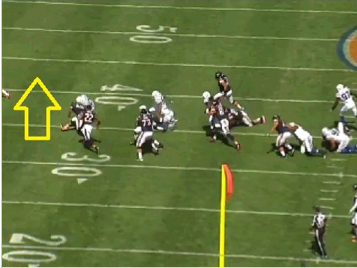 The second example comes on the same drive. The Bears have the ball 2nd-and-10 at the Colts 16-yard line, and again come out in their "Regular" personnel, with Rodriquez as the full back in an off-set I-formation. The Colts again counter with their 3-4 base personnel, this time walking up free safety Antoine Bethea into the box, making an 8-man front: 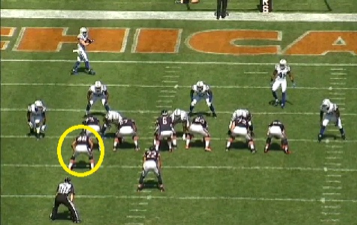 The Bears run off the right tackle, pulling Spencer, who is able to get just enough of outside linebacker Robert Mathis, Jeffery blocks down on Bethea, leaving Rodriguez to make a block on inside linebacker Kavell Connor. Rodriguez delivers a crushing block on Connor, springing Forte loose for a near touchdown: 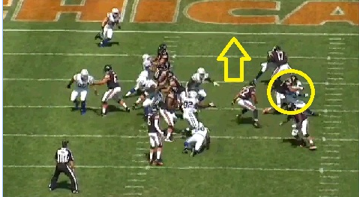 Rodriguez capped off this drive by throwing a lead block on Zbikowski on Michael Bush's one-yard touchdown run.

Rodriguez also flashed in pass protection on the Alshon Jeffery touchdown pass. Leading 34-21 with 6:37 remaining in the game, the Bears have the ball 2nd-and-8 from their 47-yard line. Instead of milking the clock, offensive coordinator Mike Tice goes for the jugular. The Bears again line up in "Regular" personnel and motion Rodriguez into an off-set I-formation. The Colts show blitz, by walking inside linebacker Kavell Connor into the B-gap (in between the guard and tackle), and sliding Zbikowski into the box: 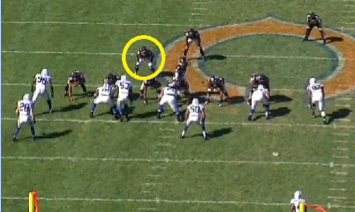 Can you believe it? Rookies helping other rookies make immediate contributions in a Bears victory.

With the pervasive fantasy football lens fans tend to look through, players are often (incorrectly) judged simply by the numbers they put up. Plays like these from Rodriguez may be overlooked by a lot of fans, but without them, the end results wouldn't have been possible. I didn't view Rodriguez's day as 0 catches for 0 yards. I viewed it as several crucial blocks that led to first downs and 14 points.

The Bears will certainly look for Rodriguez to make contributions in the passing game as well, as he is a slippery open field runner for a 240-pounder. Rodriguez is off to a good start, effectively playing the role he was asked to in his first NFL game.