BOSTON (CBS) - Just as soon as Wes Welker skipped town for the Denver Broncos, the New England Patriots already had his replacement.

Just hours after Welker agreed to a two-year, $12 million deal to catch passes from Peyton Manning, the Patriots supplied Tom Brady with another slot option in Danny Amendola.

Amendola comes to New England with some big shoes to fill -- figuratively, not literally -- taking over for the man who led the NFL in receptions the last six seasons.

Report: Brady 'Bummed Out' Over Loss Of Welker

So who is Danny Amendola?

Here are a few things you need to know about the newest Patriot:

- Amendola had a career day last September in the Rams Week 2 win over the Redskins, with 15 receptions on 16 targets for 160 yards and a touchdown. He averaged 10.7 yards per reception that afternoon.

- Amendola averages 8.8 yards per catch for his career.

- During his senior year at Woodlands High School, Amendola played in a Texas State Championship game.

- Like Welker, Amendola went undrafted out of Texas Tech. In his four years with the Red Raiders, he had 204 receptions and 15 touchdowns. As a senior, Amendola played 16 games, recording 85 receptions for 689 yards and three touchdowns.

- After going undrafted, Amendola signed with the Dallas Cowboys and was a member of their practice squad for the 2008 season.

- Amendola signed with the Philadelphia Eagles in 2009, and was assigned to their practice squad until signing with the Rams in September of 2009.

- Amendola has a bit of a history with injuries. He played just one game in 2011 after dislocating his elbow in the Rams season-opener, and missed five games  in 2012 with various shoulder and ankle ailments.

- Those injuries have kept him from doing much in the return game, but Amendola has some solid numbers returning both punts and kickoffs. In 30 games in 2009 and 2010, he returned 51 punts for 812 yards (average of 16 yards per return) and 116 kickoffs for 2,760 yards (23.8 yards per return). Those numbers dipped considerably the last two seasons though, with Amendola returning just 18 punts for 122 yards and only two kickoffs for 16 yards. So don't count on him, with his recent injuries, to be returning many kicks in New England. 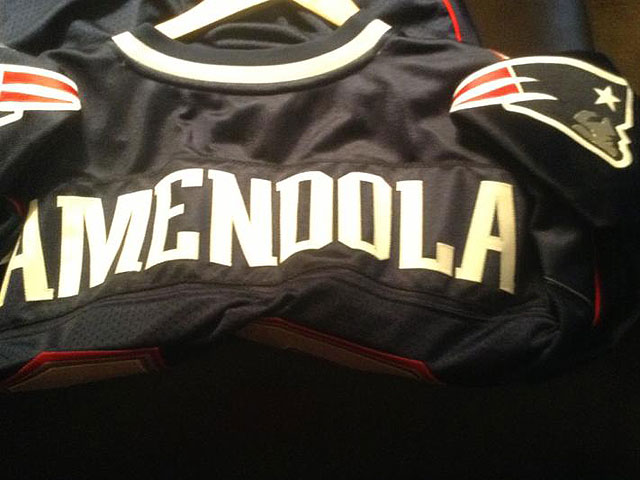 - Amendola has worked with Patriots offensive coordinator Josh McDaniels before, when McDaniels held the same position in St. Louis in 2011.