The "selfie" craze is something that is still clogging all of our social media feeds. Bathroom selfies, beach selfies, concert selfies and now even celebratory goal selfies? Athletes have been getting in trouble for pictures that have been taken of them for a very long time and now it seems that pictures they have taken themselves can get them into trouble as well.  Here is my list of the four most troublesome athlete selfies.

4. Putin A Smile On His Face 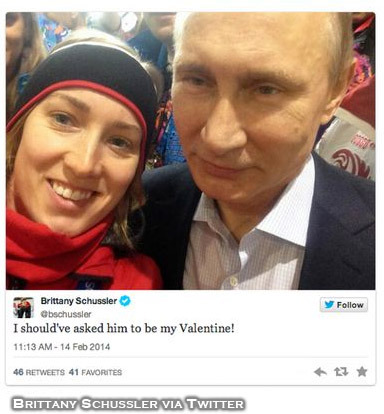 Canadian speed skater Brittany Schusser got into some hot water after posting a selfie that she had taken with Russian President Vladimir Putin at the 2014 Olympics in Sochi.  Schusser has since taken the photo down but not without facing some criticism.

Dom Dwyer's awesome goal for Sporting Kansas City ended in a celebration that resulted in a yellow card.  After scoring, Dwyer runs to the stands where he is handed his phone and he proceeds to pose for a selfie with the fans and teammate Soony Saad.

Red Sox slugger David Ortiz was criticized for his selfie with President Barack Obama when the team did their championship visit to the White House. The thought behind the criticism was that they believed Ortiz, who is sponsored by Samsung, was using the selfie with President Obama as a marketing ploy.

Shaquille O'Neal posted a selfie on Instagram that was cropped next to a selfie of Michigan man Jahmel Binion in mockery of the photo.  Shaq believed that the photo wasn't of a real person and that it was a fake but in reality it was Binion who suffers from ectodermal dysplasia. Utah Jazz guard Trey Burke joined in on the mockery along with rapper Waka Flocka Flame.  They all have since apologized.  You can see their apologies and the selfie here.