The cold came fast and furious this weekend, bringing the coldest temperatures of a generation into the Boston area. Sunday featured the coldest temperature in Boston since 1957 and we set our first record lows in February since 1967. But just like that, it's nearly gone. A hallmark of a strong El Nino winter - no sustained arctic outbreaks like the kind we saw last winter. The warmer air is zooming northward as another storm tracks to our west, bringing a nearly 70 degree swing in 36 hours for some towns. 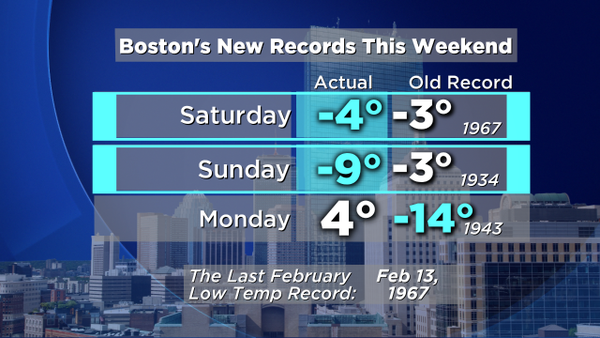 Besides the weather itself, there's another thing to be vigilant of on Tuesday - bursting pipes. The harsh weekend/Monday cold likely produced frozen pipes across the area. As water in a pipe freezes, it expands. This puts stress on pipes and can lead to cracks or other structural issues. Then as temperatures rapidly rise, ice can melt and reveal weaknesses in those pipes. Leaks or worse, bursting pipes, will likely show themselves on Tuesday. If your pipe already froze and was damaged, there's not much you can do but keep a close eye on your home/business. If leaks start showing up, shut down the water as soon as possible. Not a fun winter experience but something we dealt with last year, and we've already had numerous reports of burst pipes on Monday. 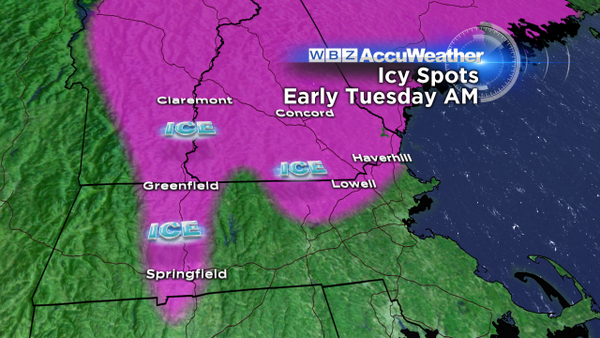 While this storm system is starting off as snow, there's nothing to stem the flow of mild air both aloft and at the surface moving in on southerly winds. The warm air moves in above our heads first, leading to a changeover to sleet and freezing rain Monday night. That's the biggest overnight issue as extremely cold surfaces readily accept freezing rain. Roads will be icy and dicey for most through 2am, but the only lingering pockets of ice by Tuesday morning's commute look to be interior valley locations. It's very difficult to scour out cold air from the lower elevations, so the Merrimack and Connecticut valleys in particular should remain icy into Tuesday morning. The good news is that ice accumulations are not expected to grow large enough for power outage issues. Elsewhere, temperatures will rise overnight and be above freezing by the morning drive. 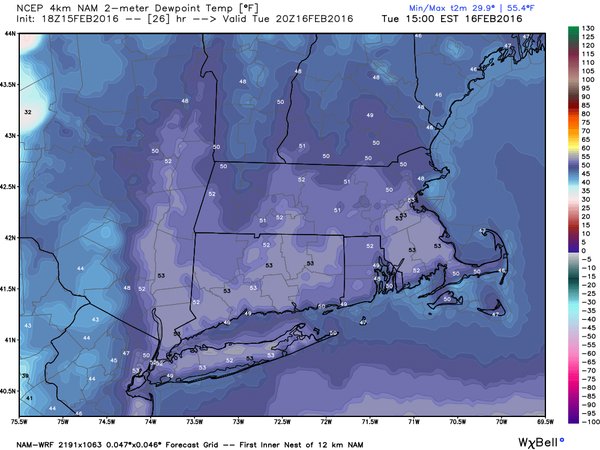 Potential dewpoints Tuesday afternoon, via the 4km NAM. When moist air moves over snow, you get fog. So areas of locally dense, snow-eating fog will be likely late Monday night into Tuesday. A big change from the bone dry arctic air that's departing! Source: Weatherbell

Tuesday starts cool and foggy, with the mildest temps (above 40) in SE Mass. Not much rain is expected from the morning through the early afternoon as we head into the warmer sector of this storm. Dew points will climb into the 40s and even possibly the 50s, which is prime snow-eating weather. Temperatures reach the 50s in the afternoon, and after the weekend it'll probably feel like a tropical rainforest out there. 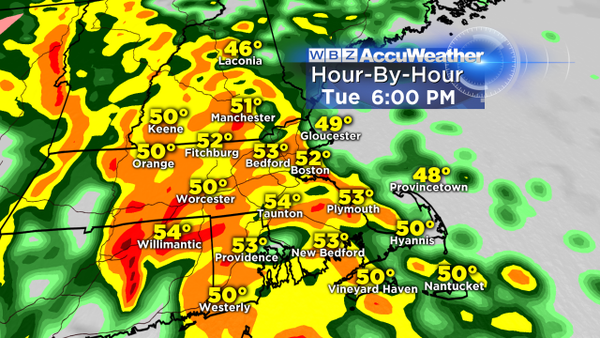 The majority of Tuesday's rain arrives in a thin band of downpours that will swing through our area between 4 and 9pm. There's strong forcing along this front, which could even help to produce some thunder and lightning. Most towns will pick up a quick 0.75" to 1.5" of rain, coming down heavily enough (on frozen ground) to produce poor drainage flooding and hazardous travel for the evening commute. Thankfully the volume on the roads isn't as high with school vacation week in progress, but anyone out there will be battling some heavy rain and strong winds. 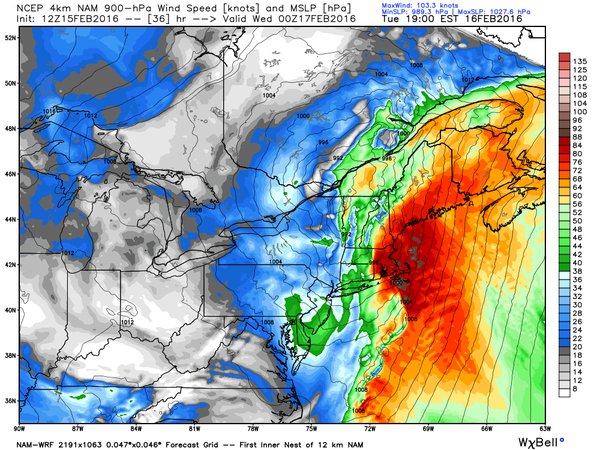 A powerful low-level jet (LLJ) sweeps across the region Tuesday afternoon and evening, some of it mixing down to the surface. Source: Weatherbell

Speaking of wind, that's a big focus for Tuesday afternoon. An extremely strong low-level jet will develop, with winds at 90 knots just a couple thousand feet above the surface! Since the air at that level will be warmer than the air at the surface, not all of this wind will translate down to the ground. But in the vicinity of these downpours, gusts 40-65mph will be possible. That's enough to cause some damage and sct'd power outages, so it's a situation we'll need to monitor carefully throughout the day. Gusty winds will continue behind the downpours as high pressure starts to build in, so expect a windy Tuesday evening.

The weather excitement calms down after this storm. Wednesday stays on the mild side, in the 40s, while we live in the middle ground between the departing storm and colder air to the west. The cold stuff swoops in for Thursday, but nothing like what we saw this past weekend. A couple snow showers and highs in the low/mid 30s on Thursday won't be too tough to take. Friday looks peaceful, in the mid/upper 30s and some late day clouds.

Even the weekend looks relatively quiet. A quick-moving and weak storm system will push across New England and southern Canada Friday night into Saturday. Some warm-air advection snow may be in the cards, but not expecting a big even at this time. Fortunately, snow is finally favored in northern New England with this one! Good timing for weekend skiing. Our temps here in southern New England reach into the 40s Saturday and Sunday...maybe even a run at 50 for some towns Sunday afternoon. A zonal jet stream flow keeps things comfortable into the start of next week, before we begin to eye the next storm potential for the middle/end of next week.