If you've dug any holes in the garden lately or checked the water bill, I'm sure you've noticed that it hasn't rained much this spring. Every month of 2016 except February has featured below average precipitation in the Boston area, and the trend is looking to continue this June unless there's a surge of rain at the end of the month. Question is - will this be a nuisance, or a higher-impact situation for us going forward? 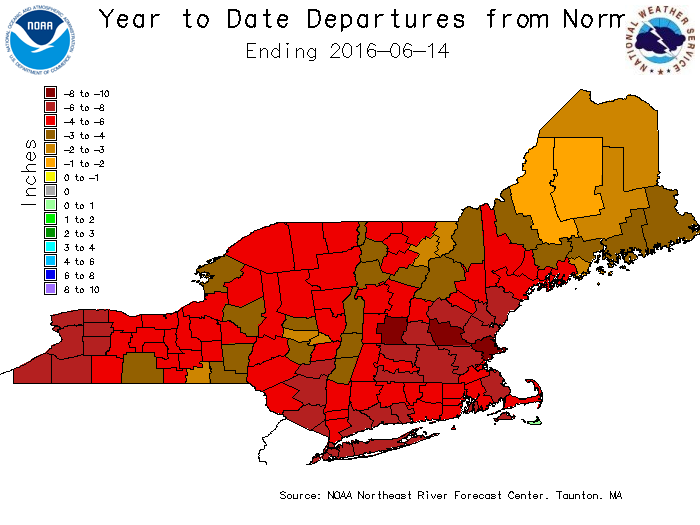 Let's start with where things stand. If you go back to the start of the year, the driest conditions have been across the Merrimack Valley, southern New Hampshire, and Essex County. Some towns are running a nearly 10" deficit, which is nothing to sneeze at! That's a big chunk of typical rainfall to date. The situation isn't quite as bad in the Boston Metro, but it's certainly quite dry. And many lawns are showing signs of stress (even some trees like white pine, which are starting to brown).

Good news is that even though it has been dry and the winter was not very snowy, reservoirs are still in good shape. The Quabbin Reservoir (which supplies the Boston area with water) is at 92% capacity. That's down 6% from this time last year, but still not something that would draw much concern. While the Quabbin is a major body of water, how about the streams and rivers? They're hurting, with very low streamflow. I have to say that's not altogether surprising for mid-June, since we tend to go through dry stretches this time of year and rivers can quickly lower under the hot and dry conditions. In some cases it's even nice to have low streamflow, because it allows rivers and streams to absorb rainfall from heavy events like training thunderstorms or tropical systems. 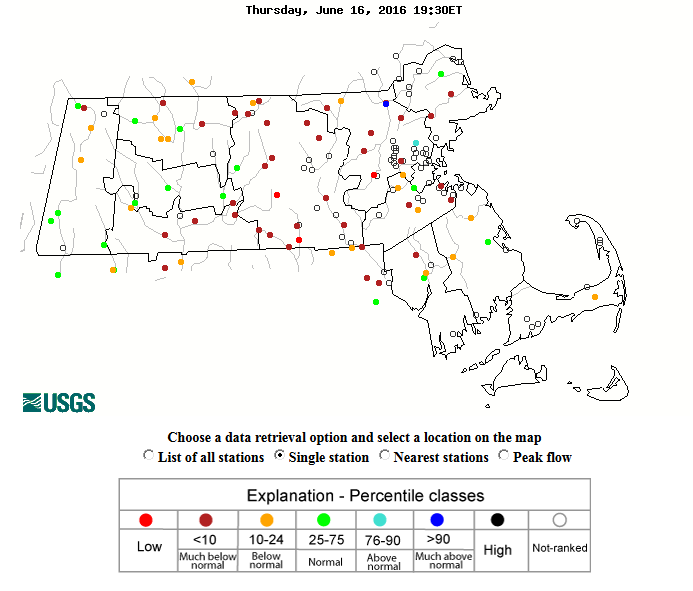 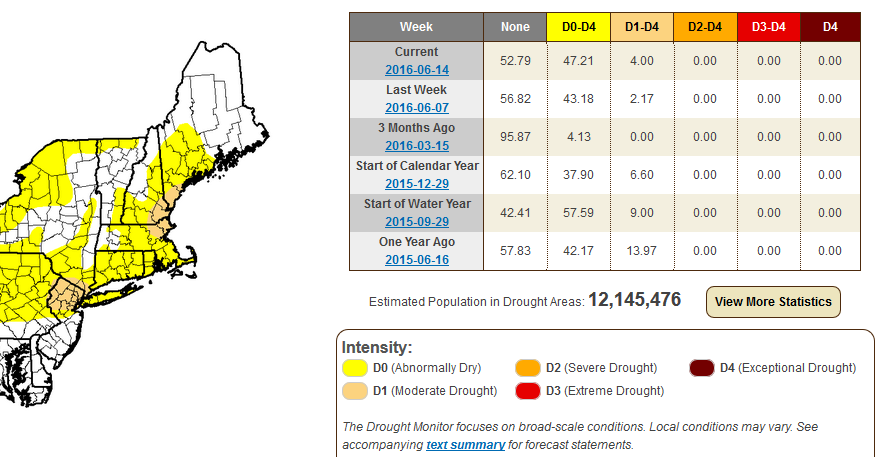 The Drought Monitor, which is updated weekly on Thursday mornings, has parts of northeast Massachusetts and southern New Hampshire in its 'Moderate Drought' category. I'd expect that category to spread when we get the next update on the 23rd. Now our droughts and, say, California's droughts are not the same. We get dry stretches. We can stress out wells. We can certainly have crop irrigation issues. But we don't go through multi-year mega-droughts here in New England. Our repercussions typically include those wells, agricultural stress, brush fires, and in really bad years the chance of canceled 4th of July fireworks. These are all things we'll have to monitor in the weeks to come. 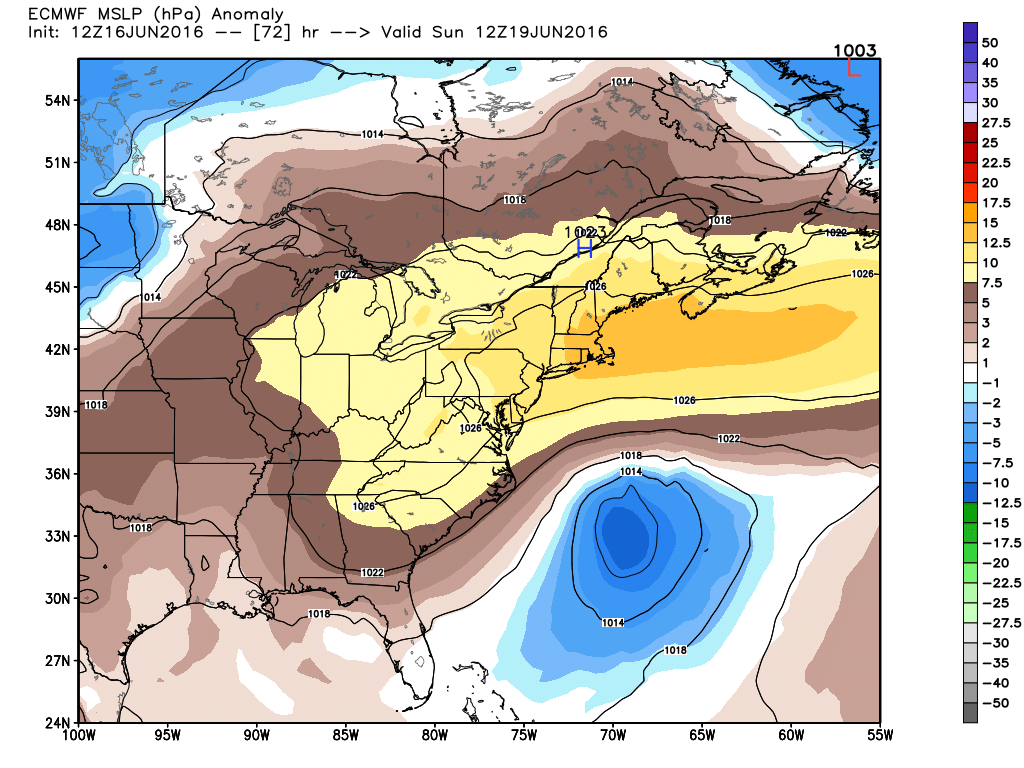 Which brings us to the forecast - more dry weather. A big area of high pressure is sprawling out across the country this weekend, including here in New England. Wonderful beach weather and perfect for Father's Day plans, but not great for the parched landscape. I'm really not seeing many opportunities for rain over the next 7-10 days. Below is the European model's EPS (ensemble prediction system) probability of 1" of rain or greater. You can see that our odds are essentially non-existent. In fact, I don't think we'll even manage a half inch of rain through the end of next week. And some towns may not see a single drop of rain until at least next weekend. Our only real chances are scattered storms on Tuesday and maybe again on Wednesday. The nature of scattered storms means they don't touch every town. 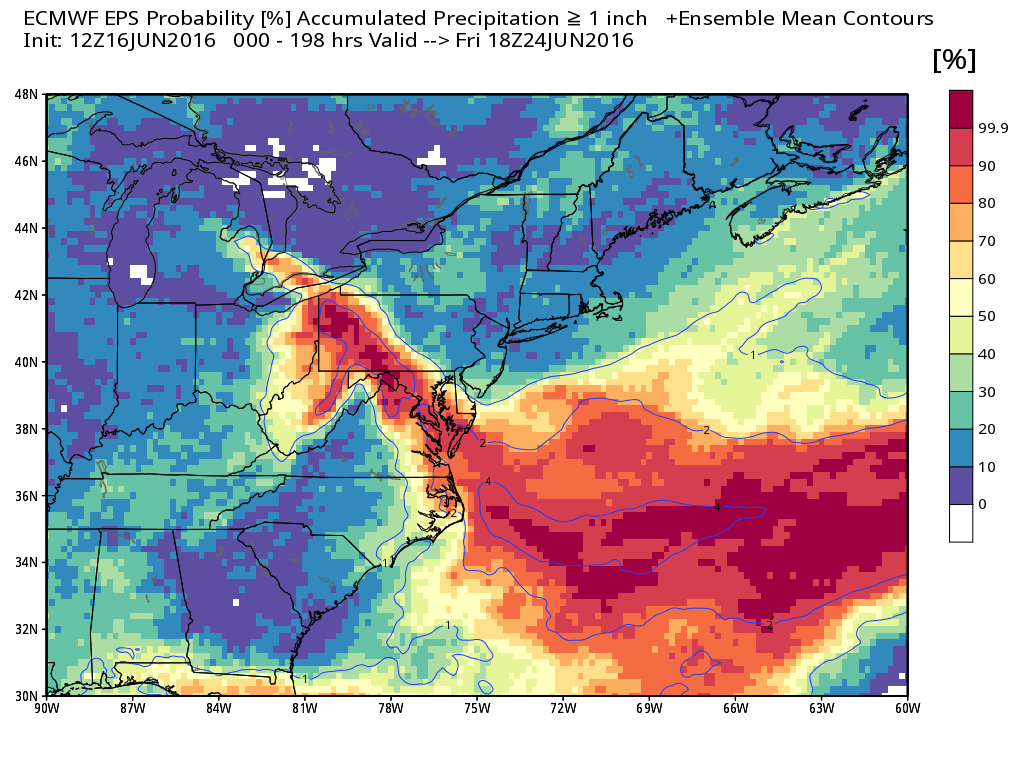 Our comfortable air actually has been a problem, too. We've barely had to deal with any humid days so far, and that dry air can help accelerate moisture loss for plants and soils. When dew points are routinely in the 40s and 50s and strong June sun is beating on down, that's a good recipe to dry things out in a hurry. This too is expected to continue. Dew points will stay very dry for essentially the entire extended period. There should be a quick 'pop' of humid air on Tuesday, but that's about it. I'd expect continued troughing into New England through early July, which should keep humid air masses at bay and only yield to them for short periods of time. 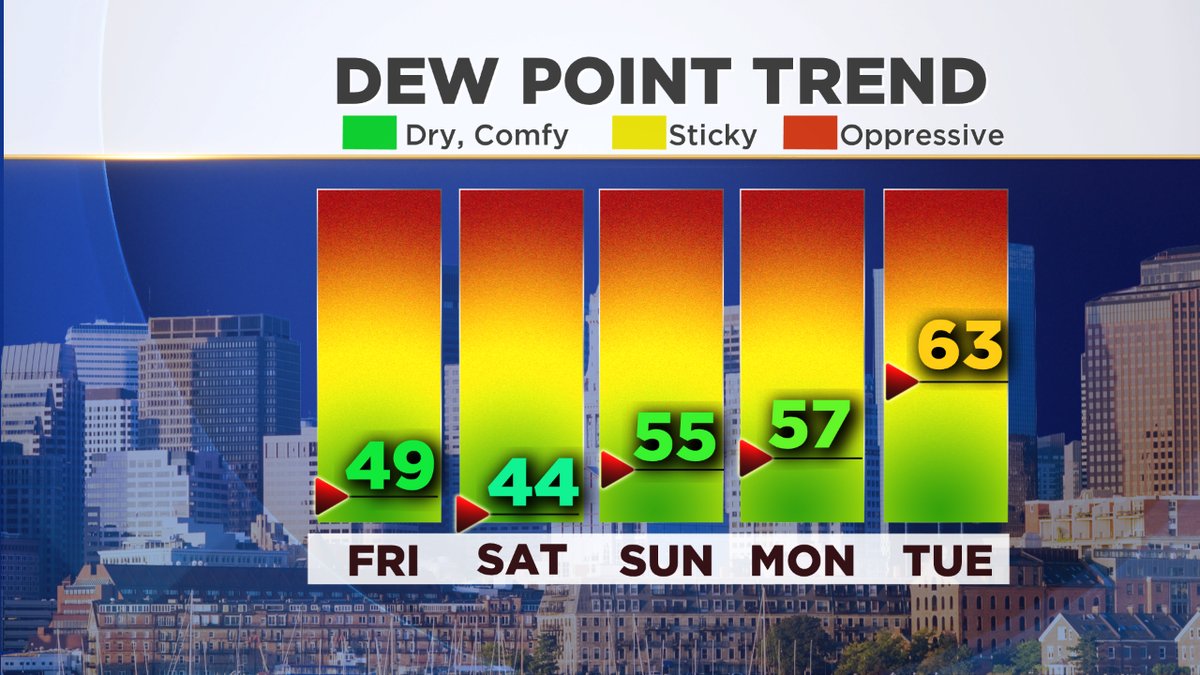 So long story short, I don't think this dryness is going to let up anytime soon. We can make up for lost time in a hurry with a tropical connection, which becomes increasingly possible in late July/August. One slow moving tropical system, or even a connection to one, can produce several inches of rain without breaking a sweat. I think that's what we'll have to hope for to help pull us out of this later on in the summer. Of course we don't want a direct hit! But some tropical moisture from the Gulf or Atlantic getting drawn up into New England would be a good thing to make up for lost time, and is the best shot at significant widespread rainfall during the summer months. Hit or miss thunderstorms won't do it. We'll be keeping a close eye on it for you in the weeks to come.