BOSTON (CBS) - Our March nor'easter is well underway and so far so good, the forecast remains on track.

It is far from your typical winter storm, the center of this giant storm is nearly 500 miles south and east of New England!

Normally a storm this far away would be a complete miss for our area, but this storm is so large and so powerful, its shield of precipitation and wind extend out much like a hurricane, far from its core.

Most of the snow that fell during the day on Thursday either melted on contact or compacted severely. Snow will mix with rain along the immediate South Shore and over Cape Cod all day Thursday.

The snow shield has now expanded to cover all of Southern New England and the majority of the snow accumulation will happen overnight tonight into Friday morning. A fresh layer of several inches of snow will coat the ground and many roads by Friday mornings commute, leading to some tricky and treacherous travel. Snow will continue all morning and finally begin to taper off during Friday afternoon.

A fresh layer of several inches of snow will coat the ground and many roads by Friday morning's commute, leading to some tricky and treacherous travel. Snow will continue all morning and finally begin to taper off during Friday afternoon.

We are still forecasting a widespread 4-8" for most of Southern New England with slightly less at the immediate South Shore (2-4") and over Cape Cod. 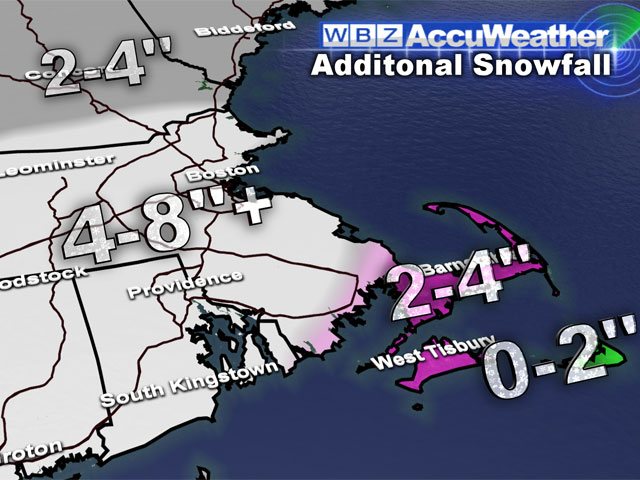 There may be some isolated totals higher than 8", especially in the higher terrain of Worcester County and in southeast Massachusetts where several inches fell this morning.

However, I would stress a few things with the final accumulation totals…first it will likely never look like 8"…unless you are measuring and adding every few hours, the snow will be so heavy that it will be constantly compacting. Also, with temperatures this weekend in the low 50s with lots of sunshine, a tremendous amount of melting will occur…In fact by late Sunday I would imagine almost all of the snow will have vanished!

This remains the greatest concern with this storm. Our first high tide of note has come and gone (this morning) and there was widespread minor to moderate coastal flooding with many shore roads washed out.

The main problem is the persistent, strong east wind just will not relent, so the water which rushes in for high tide will not ever be able to fully escape back out to sea.

Each successive high tide will only get worse, with a peak coming Friday morning.

Astronomically speaking, Friday's 8 a.m. high tide is the greatest of the bunch and it will come after 48 hours of pounding easterly winds.

The current forecast is for moderate to major coastal flooding, rivaling that of the blizzard about a month ago. Wave heights will be an astounding 25-to-30 feet just offshore. The beach erosion will be massive.  Our coastline has been reshaped forever with all these recent storms and this event will likely be the worst yet.

So is this the end? Is this the last hurrah for a very memorable winter blitz of storms?

In the short term it certainly appears that we get at least a brief spring reprieve.  Highs will be near 50 or higher for the four days following this storm. But I wouldn't count out winter 2013 just yet.  The pattern remains active and Mother Nature just may have a trick or two left up her sleeve.