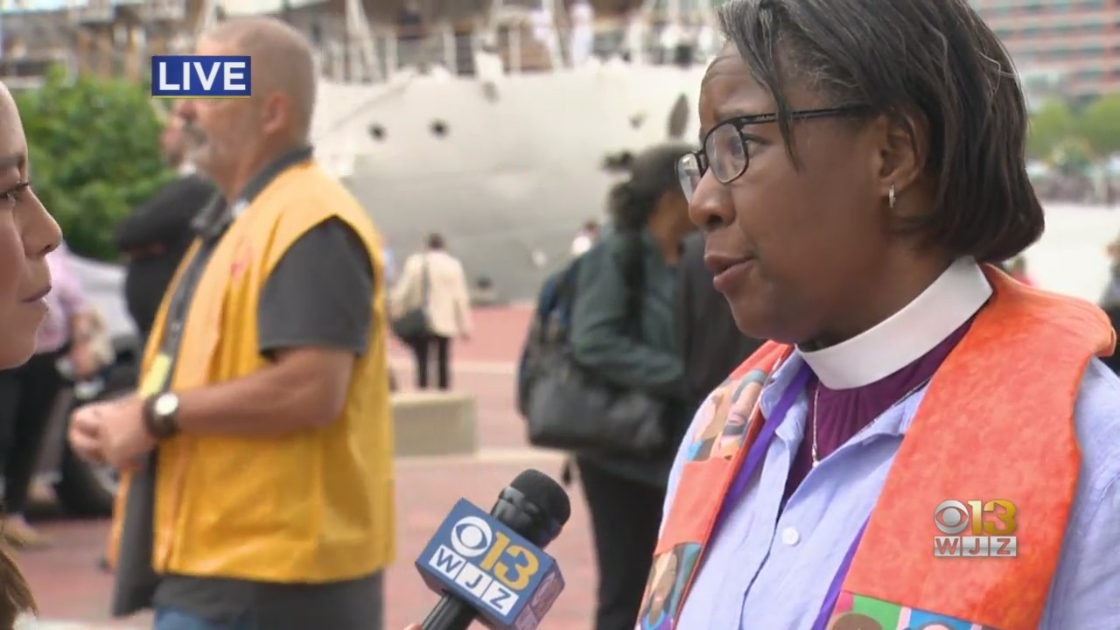 BALTIMORE -- Over 100 Episcopalians walked from the Convention Center to the intersection of Conway and Light Streets and held a prayer vigil for peace on Friday.

The group stood steps away from where a shooting took place Thursday afternoon when police say a squeegee worker shot and killed 48-year-old Timothy Reynolds after the two got into a confrontation and Reynolds brought out a bat.

The prayer vigil was made up of Episcopal Bishops, pastors, and lay people, all belonging to an anti-violence group called Bishops United Against Gun Violence.

They were already in town for an annual convention, but once they heard about Thursday's shooting, they wanted to act.

"We're trying to help make a difference in the way violence is impacting not just those who died but those who lived," said Bishop Jennifer Baskerville-Burrows, from the Episcopal Diocese of Indianapolis.

There were members of the Episcopal faith community at Friday's prayer vigil from across the country and world, as far away as Taiwan.

The group sang on their walk to the corner and once there, held a prayer vigil for about 15 minutes, "showing some compassion for this city that is playing host to us, that we are with you, in this too," Baskerville-Burrows said.

Bishop Eugene Sutton from the Episcopal Diocese of Maryland said he prays for all parties involved in the shooting.

"Timothy, that man, in anger had to get a baseball bat and he felt he needed that in order to be satisfied, that's an act of violence," Sutton said.

But he'll also pray for the squeegee worker who is now a suspect.

"They weren't there because they just love being on a corner in heat, they were trying to make a living . . . where was the good access to a viable way of living so that they don't have to resort to that and feel that they have to have a gun in order to protect themselves?" Sutton asked.

There are programs to help squeegee workers find jobs in Baltimore, mainly through the office of African-American Male Engagement. However, the city says it will not forcibly remove squeegee workers from street corners.