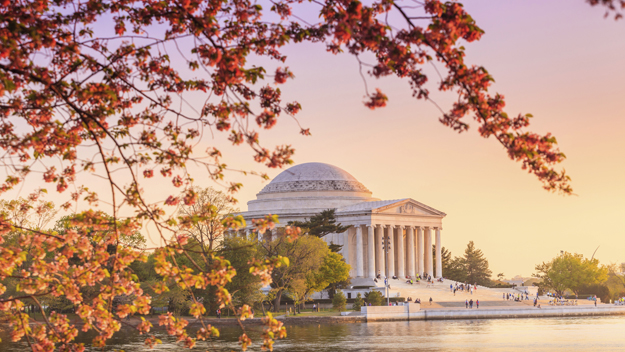 A trip to Washington D.C. should be high on anyone's list. Featuring several of the world's most famous structures and museums, there is plenty to see and enjoy. What's even better is most of the several attractions are absolutely free. Here is a handy guide to the District of Columbia, featuring transportation information, dining and lodging recommendations and the best attractions to enjoy when visiting the nation's capital.

Getting to Washington D.C.

Related: Ask An Expert: Saving Money On Airfare
Getting Around Washington D.C.

As in other major American cities, the best way to get around Washington D.C. is with public transportation, more specifically Metrorail with service to the most important attractions. Metrorail features six color-coded routes and fares can be purchased on a SmarTrip Card. Metrorail stations are close to top attractions like Arlington Cemetery, National Mall, the White House and the U.S. Capitol. Motorists are advised to park their vehicle at a parking facility, such as the garage at Union Station, and then take the Metrorail.

Located across the Potomac River from the Lincoln Memorial, Arlington National Cemetery is the final resting place for more than 400,000 fallen military heroes, their families and other prominent people. Administered by the U.S. Army, the national cemetery features the Tomb of the Unknown Soldier, guarded 24 hours a day, 365 days a year.

Now a National Historic Site, Ford's Theatre is the site where President Abraham Lincoln was assassinated. There is no admission fee but advanced reservations for $2.50 are recommended during the tourist season. Free tickets are dispensed at the Ford's Theatre Box Office at 8:30 a.m. on a first-come, first-served basis. All visitors must present a timed entry ticket. Tickets for visitors two years old and older are available online and all entries are self-guided. Visitors can also visit the museum collection, featuring President Lincoln's clothing and John Wilkes Booth's derringer, and the Peterson House, the location across the street, where Lincoln died.

The oldest federal cultural institution in the country, the Library of Congress is also the largest library in the world. Among the Library of Congress' 150 million artifacts are a draft of the "Declaration of Independence," rare Gutenberg Bible and Giant Bible of Mainz and the largest public collection of sound recordings in the country. There are daily one-hour tours of the Thomas Jefferson Building and no advance reservations are required.

The National Air and Space Museum holds the world's largest collection of aviation and space artifacts. With more than eight million annual visitors, it is the nation's most visited museum and the largest of the 19 Smithsonian museums. Many of the most famous aircraft in world history are preserved here, including the "Spirit of St. Louis" and the 1903 Wright Flyer, in addition to the Voyager, Mercury and Gemini spacecrafts.

Simply referred to as the National Archives, the three most important documents in the nation's history are preserved here, including the "Declaration of Independence," the "Constitution" and the "Bill of Rights." These national treasures are all on display at the Rotunda for the Charters of Freedom but photographs or videos are not allowed. The National Archives also holds a number of other historical documents, such as a copy of the "Magna Carta," the "1778 Articles of the Confederation," "1783 Treaty of Paris," "Emancipation Proclamation" and the "Louisiana Purchase Treaty."

Just minutes from the National Archives is the National Gallery of Art. Many of the world's most famous paintings are hosted here including Van Gogh's 1889 "Self Portrait", da Vinci's Ginerva de' Benci, Rembrandt's "Self Portrait" from 1630, Vermeer's "Woman Holding a Balance," Jacques-Louis David's "The Emperor Napoleon in His Study at the Tuileries" and Monet's "The Japanese Footbridge."

The two-mile-long National Mall is the location of many of Washington D.C.'s most important attractions. The Lincoln Memorial lies on the west end and the U.S. Capitol on the eastern end, with the Washington Monument, slight west of center. The National Mall attracts 24 million people annually and the scene for many public events, including the Presidential Inauguration and political demonstrations.

The National Museum of American History holds many of the nation's most important artifacts, including the authentic Star Spangled Banner. The most famous American flag is on display for public viewing and no photography is allowed. Other museum highlights are President Lincoln's top hat, Thomas Edison's lightbulb, Dorothy's red shoes from the "Wizard of Oz" and Archie Bunker's chair from the 1970s television sitcom "All in the Family."

The National Portrait Gallery houses a vast collection of art of America's most prominent individuals. The gallery holds America's only complete collection of official presidential portraits outside of the White House. Portraits of every American president are housed within the National Gallery, including Shepard Fairey's iconic "Portrait of President Barack Obama." Other highlights are Gilbert Stuart's "Lansdowne" portrait of George Washington and the unfinished portrait of America's first president, "The Athenaeum Portrait," Joseph Duplessis' portrait of "Benjamin Franklin" and the "cracked plate" portrait of Abraham Lincoln.

One of the world's most recognizable buildings, the U.S. Capitol is the seat of the U.S. Congress. The visitor center is open Monday through Saturday, except major holidays and Inauguration Day. Guided tours of the U.S. Capitol are available and advance reservations are recommended.

Located behind the U.S. Capitol and adjacent to the Library of Congress, the U.S. Supreme Court is the highest federal court in the country. The Supreme Court building is open to visitors on weekdays from 9 a.m. to 4:30 p.m. Court sessions are open to the public on a first-come, first-served basis. No guided walking tours are available but visitors can view court-related exhibitions on the ground floor and attend a docent-led program on the function of the Supreme Court, its history and architecture.

After suffering extensive damage from a magnitude 5.8 earthquake in August 2011, the Washington Monument reopened in May. The towering 555-foot-high obelisk built in honor of George Washington is now open to a limited number of people each day except July 4 and December 25. Free tickets are available on a first-come, first-served basis at the Washington Monument Lodge on 15th Street. Advanced tickets can be ordered online or by phone and there is a $1.50 service charge per ticket. Ticketholders can take the express elevator to the 500-foot level observation deck and the museum at the 490-foot level.

The White House has been the official residence and principal offices of the President of the United States since 1800. Public tours of the White House are available but visitors must submit a request to their Member of Congress. Requests must be made at least 21 days in advance and up to six months in advance. Tour hours and additional information can be found online at Whitehouse.gov.

Dedicated to President Franklin Delano Roosevelt, the FDR Memorial lies on approximately 7.5 acres at West Potomac Park. The memorial features a bronze statue of President Roosevelt sitting next to a statue of his Scottish Terrier, Fala, the only presidential pet honored in a memorial. Also at the memorial is a sculpture of Eleanor Roosevelt standing next to a United Nations emblem and statues depicting the Great Depression.

One half mile from the FDR Memorial is the presidential memorial dedicated to the third President of the United States and principal author of the "Declaration of Independence." The domed structure is modeled after the Pantheon in Rome and features a 19-foot-tall bronze statue of President Jefferson.

The nation's most famous presidential memorial is located on the western edge of the National Mall. Housed within an enormous Greek-style temple, the iconic 19-foot-tall marble statue of President Lincoln is one of the world's most famous sculptures. The steps leading to the Lincoln Memorial has been the scene of some of the most famous public demonstrations in history, including Martin Luther King Jr.'s "I Have a Dream" Speech in 1963 and the Vietnam War Moratorium Rally in 1969.

Dedicated in 2011, the Martin Luther King Jr. Memorial is the newest memorial on the National Mall and America's 395th national park. The unveiling of the granite statue was nearly 50 years after Dr. King made his famous "I Have a Dream" Speech just one half mile away. The 30-foot-tall statue of Dr. King is depicted as "stone of hope" emerging "out of the mountain of despair."

The Korean War Veterans Memorial honors those who served during the Korean War. Located on 2.2 acres southeast of the Lincoln Memorial and just south of the Reflecting Pool, the main features of the memorial are the 19 statues of American soldiers depicted on a patrol in Korea.