SAN FRANCISCO (CBS SF) – Two teens who eluded security to stage a nocturnal climb of the Golden Gate Bridge have triggered a social media frenzy of their high-wire antics and prompted a security review at the bridge.

Peter Teatime and his friend Tommy Rector dodged the bridge's security systems and climbed the 746 foot-high structure with no safety equipment last month.

He told KPIX 5 that it took about 10 minutes to climb to the top of one of the bridge's famous towers.

"We did it about a month ago, at the beginning of April," he said. "There was not a lot of thinking -- There's the bridge, let's do it."

Teatime says his passion is exploring and gaining new experiences.

"One of my main passions is exploration like climbing, exploring, going to new places I have never been," he said. "The Golden Gate Bridge is the most famous, is one of the tallest of its kind. So we had to give it a shot."

Teatime and Rector snuck down the Marin Headlands, along the bridge, and once the sun set, climbed the bridge's suspension stays from the shore.

Climbing on the bridge is a misdemeanor punishable by up to a year in jail. The California Highway Patrol is leading the investigation that also includes the U.S. Department of Homeland Security.

The bridge district did not know about the climb until it surfaced on social media weeks later. 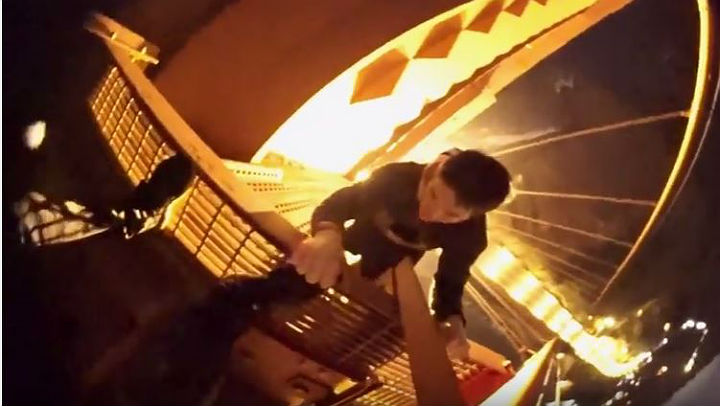 Changes are now underway in the "security infrastructure," monitoring of the cameras and patrolling on the bridge, Golden Gate Bridge, Highway and Transportation District spokeswoman Priya Clemens said.

"Their path of travel didn't trigger an alarm," Clemens said.

In fact, the teens managed to spend ten minutes on the bridge protected by a multi-million dollar security system approved by Homeland Security.

She said the district is doing an independent assessment of security led by the Northern California Regional Intelligence Center.

"I don't want to say too much about how we got past security," Teatime said. "In case anyone bad or with bad intentions wants to try this. I will say security is really tough. It's really tight. They have motion detectors, cameras. I have a lot of experience with stuff like this, so I was able to get around and get on the cables."

During the video the pair hung precariously from one of the giant cables, did somersaults on it and balanced on one leg.

Teatime said the reaction to the video has been mixed.

"All my friends and fellow climbers say it's awesome -- 'Dude that is so sick,'" he said. "I always get hate from the general public." 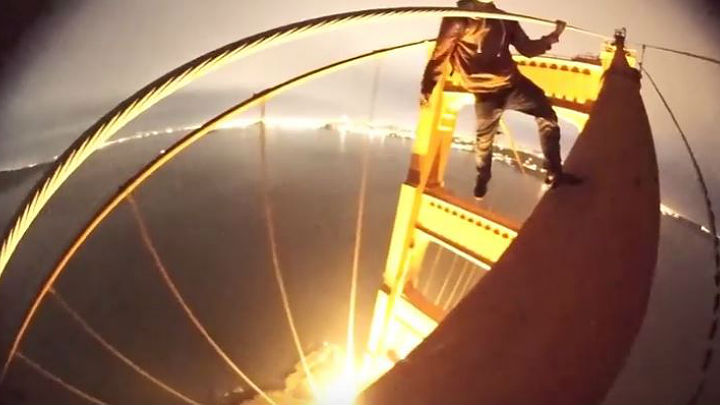 The district said in a statement that security systems keep people from harming the bridge, but acknowledged that the trespassing incident "raises questions about how such an unauthorized climb was possible and the potential harm to drivers, pedestrians, bicyclists, and the climbers themselves."

The statement added, "To address these concerns, we have debriefed the incident internally, and have made changes to our security systems and our patrolling/monitoring patterns. We will also have an independent security assessment performed, led by the Northern California Regional Intelligence Center (NCRIC) to identify additional improvements. This agency is comprised of multiple local, state, and federal law enforcement agencies."