SAN FRANCISCO (CBS SF) -- While San Francisco Bay Area residents dodged some light raindrops early Wednesday, a much larger atmospheric river continued to intensify off the coast, carrying with it the threat of up to 5 inches of rain in the coastal mountains this coming weekend.

The large plume stretched hundreds of miles across the Pacific, pulling in tropical moisture from the Hawaiian Islands -- an unusual development for this time of the year.

When asked about the intensity of the storm, Marty Ralph, director of the Center for Western Weather and Water Extremes in La Jolla, didn't mince words.

"It's an early start opportunity for us — and it's a big one," he told the Washington Post. 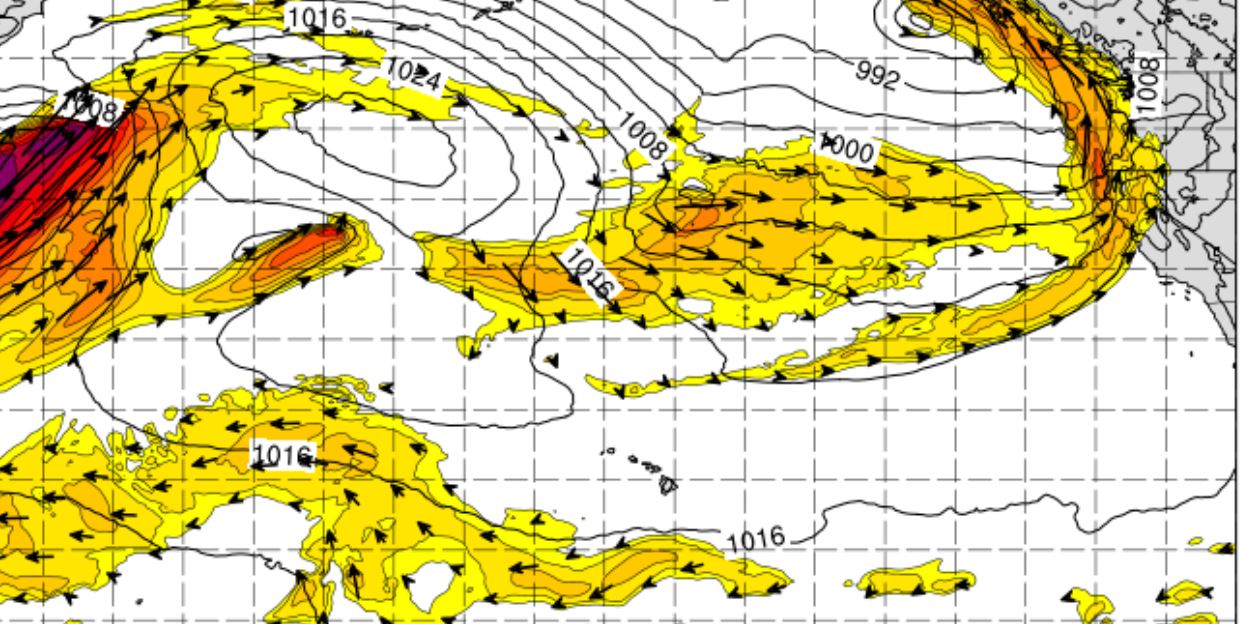 Forecasters said the first pulse of moisture brought showers to the Bay Area overnight. According to the National Weather Service, the coastal ranges in Sonoma and Marin counties received as much as an inch of rain with just about 0.10 of an inch falling in the lower elevations around the Bay Area.

Another pulse was expected to drop southward and inland Thursday night into Friday morning, bringing light to occasionally moderate rainfall.

Early Wednesday, the National Weather Service warned of possible flash flooding in the areas of the Dixie and North Complex fires Thursday evening and into Friday morning. Heavy rains are expected to create flows of ash and other debris, and residents should plan for possible evacuation.

The week's first storm moved through on Oct. 17, bringing enough snow to shut down highways over the Sierra's higher passes and require chains for vehicles on Interstate 80. The UC Berkeley Central Sierra Snow Lab at Donner Pass reported 10.3 inches of snow by 8 a.m. Monday.

"That was a pretty wild ride for the first real storm of the year," the California Highway Patrol's Truckee office tweeted.

But those storm systems are mere preludes to the atmospheric river predicted to arrive Sunday evening into Monday.

"(We are) expecting 3.00"-5.00" rainfall amounts along the coastal ranges with 1.00"-3.00" totals elsewhere," the National Weather said. "Strong and gusty winds will likely accompany the slow moving frontal boundary as it moves southward across the region."

The last potent atmospheric river roared into the Bay Area on Jan. 27th.

The torrential rains caused flooding in the Carmel River area, triggered multiple mudslides in the burn scare of the Carmel, River and Dolan wildfires, dumped when 15 inches of rain over Big Sur region and dumped 7 feet of snow in the Lake Tahoe.

Sunday's deluge will bring welcome relief for a region that has been suffering under extreme drought conditions for months.

On Tuesday, Gov. Gavin Newsom issued a proclamation extending the drought emergency statewide and further urging Californians to step up their efforts at water conservation in the face of historic conditions.

Erik Ekdahl, a deputy director for the State Water Resources Control Board, warned about the impact of Sunday's storm as is it relates to the drought.

"One storm is great, but we're going to need a couple to get us back to a robust and healthy storage condition," Ekdahl said.

Unlike a typical calendar year, the water year for California begins on Oct. 1 and the most recent season the drought-stricken region left behind was one of the driest on record.

According to the National Weather Service, normal rainfall for Santa Rosa from Oct 1-Sept 30 is 36.28 inches. Over the most recent rain year, the area received just 13.01 inches or 39% of normal.

San Jose should be at 14.90 inches normally with just 5.32 inches falling during the water year .