SAN FRANCISCO (KPIX) -- A cremation company with a history of legal problems and a trail of unhappy customers continues to operate here in California, despite being ordered to stop offering its services in the Golden State.

Heritage Cremation Providers advertises in dozens of California cities, and all over the country, with ads that promise compassionate "service close to home." However, Lisa Koltun and her partner David Williams say the service they received after the death of her 22-year-old son Jake, was anything but compassionate.

"It was horrifying how sloppy and irresponsible the company was," Koltun told ConsumerWatch.

When Koltun's son died in a skiing accident in Boulder, Colorado, his Bay Area family searched the web to find a local cremation service. They say the problems that began soon after selecting Heritage included a series of paperwork mix-ups, billing errors and trouble reaching the company. However, the delay in receiving her son's ashes was the most painful issue for the grieving mother. She says she was forced to return home to the Bay Area from Boulder, without her son.

"It was just a nightmare," Koltun said.

There are dozens of complaints and scathing reviews online about Heritage Cremation Providers, including some that claim the company held ashes for "ransom" and couldn't provide information to families about the whereabouts of their loved ones remains. Two years ago, California's Cemetery and Funeral Bureau ordered filed a cease and desist order against Heritage Cremation Providers, and fined the company $5,000 for operating without a license, but Joyia Emard of California's Department of Consumer Affairs says that fine has not been paid.

The company is operating with a business license from Colorado, one of the few states that does not require funeral directors to have a license. However, when a reporter from our sister station KCNC dropped by an office building listed as the company's address, he found no one from Heritage actually worked there. 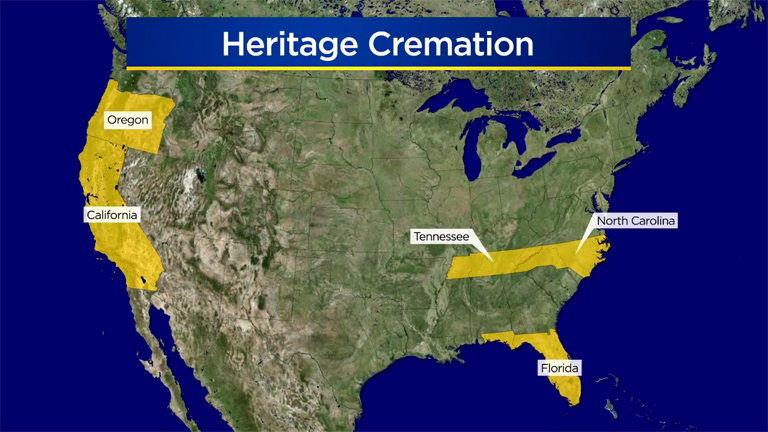 California officials say Heritage Cremation Providers ads are misleading customers into thinking the company is local when it's not. The company acts as a "body broker" or middleman, by subcontracting with local funeral homes for their services. Again, something Emard says the company is not allowed to do without a valid California Funeral Directors license. "They should not be conducting business in California," she said.

When KPIX ConsumerWatch reporter Julie Watts called the company this week, they were still very much operating in the state. A representative insisted they were licensed in California and even said they were located in San Jose. The company does not have a local office.

Emard assured ConsumerWatch that the state isn't finished with Heritage: "There are other actions that are being looked at," she said.

At least four other states, North Carolina, Florida, Oregon and Tennessee, have also taken actions against Heritage Cremation Providers for operating without a license.

The father and son duo behind the company has a long history of problems with the law.

The father, Joseph Damiano, is the registered agent for the business. He was arrested in 2002 for operating a crematory without a license and providing bodies to Lynn University in Florida for embalming practice without the knowledge or permission from the families of the deceased. His son, Anthony, was later barred from the funeral business in Florida for ten years.

In a phone call, Anthony Damiano said he had no comment for the KPIX investigation, but recently told our Miami affiliate that the company will continue to serve the families that need their services.

That is a prospect that agonizes Lisa Koltun, who two years later, still tears up when recalling her ordeal. "I can't stand the thought of another parent or anyone going through this."