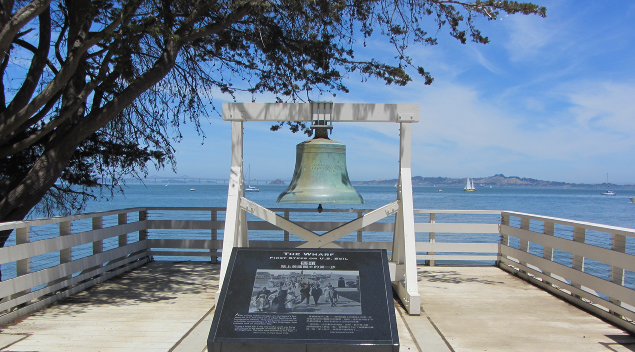 With the prospects of a rainy season this winter, many of the Bay Area's most popular hiking trails may be too muddy and slippery to enjoy. While it's still too early to determine how local trails will hold up, there are still more than 1,000 miles of exceptional paths to explore in and around San Francisco. The following are five of the best winter hikes within a two hour drive of the City by the Bay, from casual coastal strolls to enchanting excursions through towering Redwood forests. Because of the certainty this winter, visitors to any of the recommended destinations are advised to check weather and hiking conditions before venturing out.

Featuring unparalleled views of the San Francisco skyline, Angel Island's paved roads make it a perfect winter hiking destination. The largest natural island in the San Francisco Bay is only accessible by private boat or public ferry with limited service during the offseason. But park fees are included with ferry tickets and the larger payoff is smaller crowds and virtually no motor vehicles present, including the trams that operate during the peak months. The 740-acre island offers 13 miles of hiking trails, including the 5.8-mile Perimeter Road and shorter strolls near Ayala Cove. Angel Island has served in many capacities dating back to the 19th century, including military bases, a public health quarantine station and the historic U.S. Immigration Station once known as the "Ellis Island of the West."

Perhaps the most popular visiting time of year for this fascinating coastal destination in San Mateo County is in winter. That's because Año Nuevo is home to one of the world's largest mainland breeding grounds for the northern elephant seal, drawing thousands of visitors annually from all over the world. While these large, earless members of the seal family can be seen here year 'round, up to 10,000 northern elephant seals return to mate and give birth from early December through March. The trek down to the natural preserve is a moderately strenuous three-mile hike and only guided hikes are allowed to see the elephant seals during this important period. Reservations can be made by calling Reserve America or visiting the official website. Visitors without reservations can still explore other park trails, including New Years Creek Trail and Steel Trail.

Home to the largest continuous stand of old-growth redwoods south of San Francisco, Big Basin is easily one of the most popular hiking destinations in the Bay Area. Located within the Santa Cruz Mountains southwest of Silicon Valley, California's oldest state park features more than 80 miles of hiking trails, including a significant portion of the legendary Skyline to the Sea Trail, also known as the Tree to Sea Trail. While a trek along the entire 29.9-mile trail takes up to three days to complete, day visitors can park their vehicle at the park's headquarters, then hike 12.5 miles to Waddell Beach with perhaps another vehicle waiting at the coastal end, or completing the 25-mile roundtrip. If the estimated six hour hike seems to imposing, there are shorter trails to explore, such as the four-mile Sequoia Trail, which features Semperviren Falls, and the six-mile Skyline to the Sea Trail to Meteor Trail, passing by many of the park's old growth of Redwood trees.

Mount Tamalpais State Park is arguably the North Bay's most popular hiking destination. Named after the highest peak in the Marin Hills, this park has more than 60 miles of scenic hiking trails with multiple access points and connects to an even larger trail system in the surrounding areas. One of the park's most distinctive trails is the 7.3-mile Matt Davis- Steep Ravine Loop, with posted trailheads at Pantoll Ranger Station (park headquarters) or in Stinson Beach near the fire station. Yet the most famous path is the 9.5 Dipsea Trail that begins in Muir Woods before entering Mount Tam, as the locals call it, and eventually arrives in Stinson Beach at the finish line of the oldest trail race in America. One other exceptional trail popular for winter hiking is the Cataract Falls Trail just outside the park's northeastern border. This out and back trail covers 2.9 miles and features picturesque waterfalls before reaching Alpine Lake, a reservoir managed by the Marin Municipal Water District.

Point Lobos has often been described as the "crown jewel of the State Park system." Situated along the Central Coast just south of the picturesque town of Carmel-by-the-Sea, Point Lobos showcases 550 acres of fully protected land, including a number of scenic hiking trails. Trails suitable for all levels of hikers can be accessed from multiple spots within the park, with the Cypress Grove loop, Sea Lion Point Trail and Carmel Meadow Trail among the most popular. Home to one of only two of natural stands of Monterey cypress trees remaining on the planet and internationally recognized as a premier diving destination, Point Lobos is also famously said to be "the greatest meeting of land and water in the world." For visitors preferring to spend the night, there are several extraordinary places to consider in the Monterey Peninsula, including the fabulous Bernardus Lodge and Spa and the Cypress Inn, owned by Hollywood legend Doris Day.