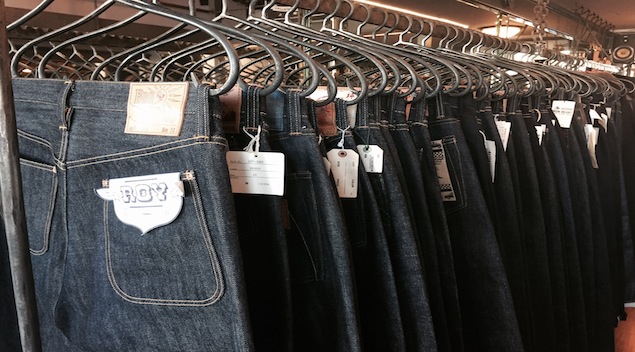 Self Edge is about the quality and timelessness of a mid-20th century era sourced from Japanese brands. Identified and imported for the first time a decade ago, labels such as Dry Bones, Sugar Cane, Iron Heart, The Flat Head, The Strike Gold and Real Japan Blue are now known to connoisseurs.

Commenting on the men's "vintage, casual and very American" look that Kiya Babzani curates for Self Edge stores since starting up in San Francisco a decade ago, he notes that brands produce what Self Edge orders for its four locations; there's no stock product. Since everything is cut and made to order, Self Edge doesn't follow trends -- it sets trends.

Esquire Magazine is among the many voices in men's fashion forums who consider Self Edge on Valencia Street as the leading selvedge denim retailer and Kiya Babzani as the international denim expert. Since the store's 2006 opening, the mission in The Mission has been to deliver a "Japanese re-interpretation of Americana," including the story behind the making of each garment, care advice and a repair workshop. An on-topic fashion conversation with Babzani is an education in itself as he picks these as the leading 2015 spring trends for men.

Look twice, since polo shirts don't normally go beyond solid or striped, plus ubiquitous logo. This spring sees 100 percent cotton piqué polo shirts that are slim fitting in the body and arms with geometric patterns inspired by Googie aesthetics, as first coined in 1952 by an 1952 urbanist observer. A '50s original brand, Star of Hollywood is now re-created in Japan by Toyo Enterprises, known for Sugar Cane & Co., producing reproductions of their favorite pieces. Look for trademark motifs: diamond patterns and tarantulas, "not on the same shirt," per Self Edge.

"Rings are huge," says Babzani, a keen observer of the jewelry for men trend he's flagged for 2015. They're not necessarily worn on the ring finger, either. Making a personalized statement includes "everything that's something to add, mostly vintage-looking," he suggests, saying that bracelets are definitely included among the multitude of options which also puts key rings and chains in focus. Expect sterling, brass, leather, turquoise and a combination of these materials.

Related: Best Places To Buy A Hat In The Bay Area

Jeans rolled up equals a space for socks to show. Babzani says designers such as Tokyo-based CHUP are doing "amazing different patterns," claiming that territory to show colorful Nordic and ethnic designs inspired by tribal motifs and symbols sourced from all over the world. At CHUPS, the hand-linked toes and high quality weave production using vintage knitting machines means that output is limited to only a few pairs per day. Low sneakers will show off more sock fun, but on the feet, Babzani says "the hi-top sneaker trend is here to stay."

Low sneakers from brands like Converse will show off more sock fun, but on the feet, Babzani says "the hi-top sneaker trend is here to stay." Curious about what else is not going to disappear any time soon in men's appearance and grooming, we asked about 2015 and beyond. According to Babzani, beards that go beyond designer stubble are staying put.