DAVIS (CBS13) - UC Davis researchers have discovered that some of the best medicine to get you through a pandemic may not come in the form of a pill at all.  Instead, it may come with having a pet.

It's clear little white Maltese-mix, Heidi, stole Homer Hobi's heart.  But there's more than love between Homer and his pups.  There's an appreciation others may not understand.

"Given the state of my health, they said you probably have 2, 3, 4 more years left," Hobi recalled to CBS13. 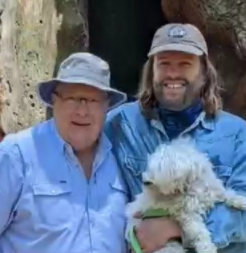 That was his prognosis nearly two decades ago. And while medical breakthroughs kept Homer alive, he believes his dog Allie was the medicine he really needed.

"I was going through some really rough times and that dog really helped me get through the roughest part of the AIDS pandemic," said Hobi.

Hobi is one of the hundreds who were recruited from networks serving long-term HIV/AIDS survivors.

"It's not like an aspirin or penicillin but thinking about what makes you feel better makes your feel more supported," said Lynette Hart, a professor at the UC Davis School of Veterinary Medicine.  Hart led a study on pandemic pets and found that HIV/AIDS survivors felt far more grief and isolation during the AIDS pandemic than during COVID.  The study also showed older men who had a dog during the COVID pandemic were able to cope better.

"Especially these long-term survivors who've been through so much. And they're at very high risk for all kinds of medical problems. So where do the dogs fit?" said Hart.

That's an easy answer for Homer.  After going through two pandemics, he's now fighting prostate cancer with radiation treatment, but has Heidi to give him support.

"I attribute my sense of well-being to Heidi," said Homer. "They give you resilience that otherwise, you wouldn't have."

Researchers say that while pet therapy helps, pets do require work.  They're hoping the study leads to more organizations stepping up with pet care support.