Police say the incident began as officers were responding to the call of a domestic situation on Wednesday night. Officers went to the front door of the home and found that it was barricaded. The female who requested officers' help to gather her belongings then went around the back of the home with officers to get some things from another home, east of the main property.

At that time, officers learned that the suspect had guns inside the main home and requested additional support.

Once help arrived, the lead officer and four other officers tried to make entry into a garage to get some of the woman's belongings.

As officers entered the garage, an officer can be heard saying, "Hello, police department. If you're in here, let me know. You're not in trouble, dude." That's when the suspect, Adel Ramos, allegedly started firing at them.

O'Sullivan was behind the lead officer and was hit multiple times, police say. She suffered a wound that was unsurvivable.

Police retreated to safe positions and determined the tools they had would not be able to withstand gunshots from the suspect's high-powered rifle. As a result, at around 6:30 p.m., police called for an armored vehicle.

O'Sullivan was lying. And while police were moving onto the property in the vehicle, the suspect continuously fired at the armored vehicle, say police.

Officers fired back at the suspect while others took O'Sullivan into the vehicle. As they were leaving, the vehicle became disabled and officers put O'Sullivan in a nearby patrol car where a CHP officer with medical training tended to O'Sullivan. She was taken by that patrol car to the hospital where she was pronounced dead. 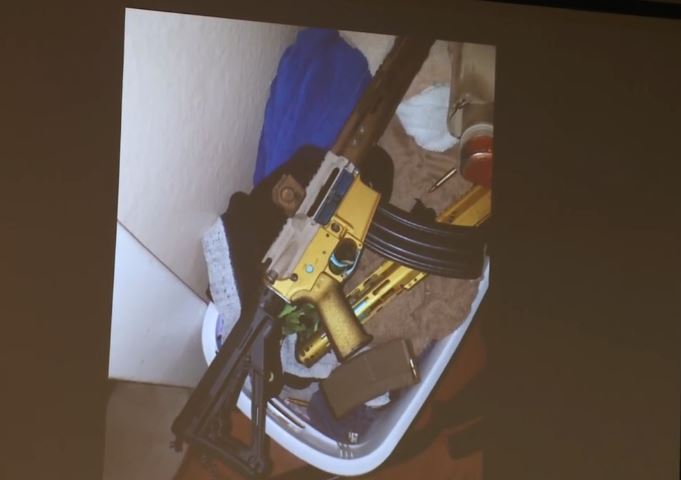 Inside Ramos' home, police say they found four guns, two assault rifles, a shotgun, and a handgun. Based on the number of shell casings spread throughout the home, police determined all four weapons were used in the standoff. They also found two more weapons in the garage.

Officers will be at the scene of the shooting throughout the weekend, processing evidence.

In all, officers fired more than 100 rounds at Ramos, but police have not determined how many rounds exactly Ramos allegedly fired at officers, but say he fired at least 30 times at officers over the span of four hours.