PHILADELPHIA (CBS) -- CBS3 is learning new details on the Sixers' plan to build their very own arena along Penn's Landing. A source tells Eyewitness News the targeted location would be along the river between Market and Chestnut Streets. That's the land that's occupied right now by the Blue Cross River Rink. 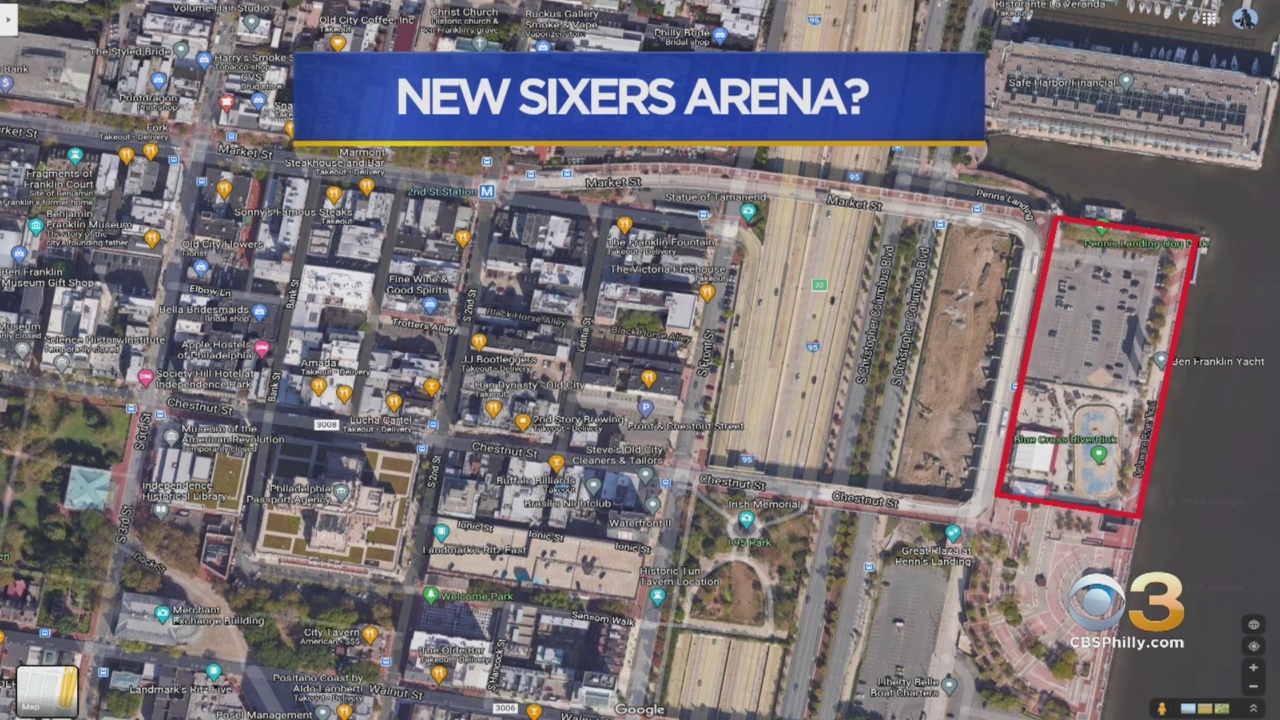 The Sixers say, along with a state-of-the-art arena and thousands of new jobs, the team would also commit to revitalizing the area by building a new school and an African American museum.

The plan has been submitted to city officials.

The Sixers' lease with the Wells Fargo Center isn't up until 2031 so the process may take a while. It's been the team's homecourt since the building opened in 1996.

"The 76ers have long enjoyed a strong relationship with Comcast-Spectacor, but the organization is exploring all options for when its lease ends at Wells Fargo Center in 2031, including a potential arena development at Penn's Landing," a Sixers spokesperson said.

Some people are excited about the idea.

"I don't care where it's at, as long as they win," South Philadelphia resident Tanya Clark said.

Although the Sixers say no direct money will come from the city or taxpayer money, the proposal calls for the project to be partially funded through a state program called the "Neighborhood Improvement Zone."

The program allows developers to use certain state and local taxes to help pay off construction debt.

The Delaware River Waterfront Corporation has been accepting bids to redevelop the property.

"They have done all the due diligence on all the proposals," Mayor Jim Kenney said.

The Philadelphia mayor says in just a few weeks, the waterfront will send him its recommendation from those bids. But he won't comment before then.

"We'll see what that recommendation is but I do not involve myself directly that process. I don't think that's appropriate," Kenney said.

Some on City Council are already voicing their opposition if any public money is used for a new Sixers' facility.

"To me, the last thing we need is another publicly-funded sports stadium boondoggle, which is literally from an economics-for-dummies playbook back in the mid-1990s. We should be banishing those types of ideas," Philadelphia City Councilwoman Helen Gym said.

Gym took to Twitter to voice her opposition to the proposal that would use any taxpayer money.

"This is a HELL NO. #priorities," Gym tweeted. "In the nexus of sheer misery that we are in as a city - mass unemployment, evictions looming, kids out of schools and people sick and dying - billionaire investors looking for a tax handout ranks about ..... NOWHERE."

She went on to tweet, "It's silly to label a position as "progressive" when it's based on whether PUBLIC land and PUBLIC dollars should be given up to a private entity. This is about $$, lobbying and power."

The Sixers believe a new facility could provide a lot of new tax money.