BOSTON (CBS) -- Sidney Crosby is boldly going where no hockey player has ever gone before: He's complaining about an innocuous hit from a hockey game two weeks after the fact, and he's claiming ill intent.

Well, Crosby's not even doing the complaining himself, leaving his agent, Pat Brisson, to be his mouthpiece. As Damien Cox of the Toronto Star passed along on Friday, "Sidney Crosby's agent is convinced Zdeno Chara of the Bruins intentionally punched Crosby where he had broken his jaw in Game 1. Nasty."

Game 1, in case you have forgotten, took place two full weeks before the agent spread the word. The reason may be because it took a while to not only find footage of the "punch" but to then display in slow-motion in such a way that it looked to be a heavy blow to the jaw. In real speed, Chara's "punch" of Crosby was nothing more than a shove with his left arm, which only came after Crosby had grabbed the back of Chara's shoulder pads following a whistle in front of the Boston net.

But in super slow-motion, and with some sort of mega zoom, Crosby and his agent were convinced that Chara had purposefully taken the time to carefully target Crosby's exposed jaw with a direct jab in the middle of a scrum. And so they gathered the video and sent it along to TSN, which was happy to "report" on the wretched assault on hockey's golden boy. (TSN's Darren Dreger actually took Chara aside to show him the video. Chara is in the middle of playing for the Stanley Cup.)

The play in question came just five minutes into Game 1 of the Eastern Conference finals. Tuukka Rask covered a puck, and Chara shoved Brenden Morrow out of the crease. Crosby reached out with his left hand and grabbed the back of Chara's neck. Chara turned, saw Crosby grabbing onto him, and shoved him with his left hand to separate himself from Crosby. The Penguins' captain did not let go of the Bruins' captain, and after exchanging a few words, they were eventually separated by officials.

While the Zapruder-esque slow-motion footage provided by TSN looks damning for Chara, the video at regular speed (uploaded to YouTube by user @dafoomie) of the "incident" shows it for it is: nothing.

First and foremost, if Crosby's jaw was not able to withstand the punishment that takes place during Stanley Cup playoff games, then the plastic shield guarding his jaw should never have been removed from his helmet. But it was, and that's not any opponent's fault.

"[Team doctors are] comfortable with it coming off, being hit and things like that," Crosby said of the removal of his face shield prior to the series against the Bruins, thereby indicating his jaw was OK.

If Crosby wanted special treatment due to an injury from which doctors determined he had already recovered, then he shouldn't have been on the ice at all.

Secondly, and perhaps worst of all, is the fact that this may be the first time in history that a hockey player has complained publicly about generic post-whistle roughhousing two weeks after it happened. Hockey is a man's game, played by self-respecting tough guys who can get gashed open by a skate blade and still pretend like it doesn't hurt. And yet, there is Crosby, upset he was shoved by a man whom he had grabbed seconds earlier. Accusing Chara of targeting his jaw two weeks after the fact is no doubt an unprecedented move in hockey's rich history. (Continued...)

The "intentional" assault on Crosby's jaw was used to explain why the 25-year-old was so upset at the end of the second period of that game. On his way off the ice after the second with the Bruins leading 1-0, Crosby said something to Chara, drawing a laugh from the 6-foot-9 defenseman. Crosby then bumped into Rask and appeared willing to get into a jousting match with the netminder. Then, after Evgeni Malkin and Patrice Bergeron fought each other and fell to the ice, Crosby and Chara confronted each other at the center ice faceoff dot. They exchanged words, with Chara leaning over to look Crosby eye-to-eye, and they eventually walked to their respective locker rooms. 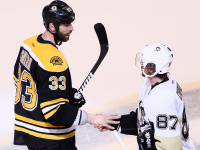 Crosby went on to be held without a single point as his Penguins were swept by the Bruins.

Crosby did sort of refer to the play in question after the game.

“They’re letting a lot go out there, and the more it gets like that, the more it’s going to escalate," Crosby said of the referees, who penalized him for interference as well as slashing in Game 1. "You can only control and channel that stuff so much. You keep letting guys do that stuff, you’re just going to push the envelope. That’s something we obviously want to stay away from, but it’s kind of a natural thing when it gets like that."

Crosby might not have referred to the "punch" specifically at the time, because he knew his video team would need some time to rewrite history before it went public.

Just like the many instances of Crosby doing things on the ice that the most talented player in the world does not need to be doing, it's disappointing to see. It's why those of us who had hoped we were seeing the next Wayne Gretzky or Mario Lemieux have come to terms with the fact that we simply are not. Crosby may be more talented than anyone else on the planet, but the more he gets caught up in nonsense like this instead of simply dominating hockey games, the less likeable he becomes.

That shift Crosby had in double overtime of Game 3 in Boston, when he lost his helmet and went on a determined rampage to try to score the game-winning goal? That's the Crosby we all want to see. Knowing he's capable of that but seeing him get tangled up in this is what makes it so difficult to embrace Crosby as this generation's greatest player.

By coming out and not only claiming a regular post-whistle shove was a direct punch but also claiming Chara purposely targeted an injured jaw is a legitimately low and contemptible action by Crosby, who continues to act like he is bigger than the game. Hopefully some day, he'll learn he is not.

Read more from Michael by clicking here, or find him on Twitter @michaelFhurley.