PHILADELPHIA (CBS) - A mural by author and illustrator Maurice Sendak is undergoing restoration at a center city museum, and visitors are invited to stop by on Wednesdays to watch the work as it progresses. 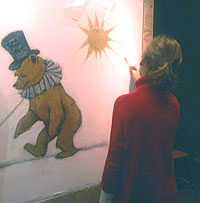 "It's certainly the most charming painting I've ever worked on," says Cassie Myers (above and right), senior conservator with Milner and Carr Conservation in Philadelphia.

Hear the entire interview in this CBS Philly podcast...

She is repairing and cleaning the large, colorful mural that children's book illustrator Maurice Sendak painted on the wall of a New York City apartment in 1961.   In order to save the mural, it was removed along with an entire section of the wall on which it had been painted, then carefully trucked to Philadelphia.

After conservation, the so-called Chertoff Mural will be become a permanent exhibit at the Rosenbach Museum and Library, 2008 Delancey Place, in center city.

Some of the characters might seem familiar to Sendak fans -- like the girl in the oversized red dress and floppy hat.

"Her name was Rosie, and she was modeled on this really rambunctious kid that (Sendak) knew in Brooklyn in the late '40s," says Patrick Rodgers, traveling exhibitions coordinator at the Rosenbach.

On Wednesdays from 12 noon to 1 PM, visitors can view the conservation.  For more information (and other visiting times), go to rosenbach.org.