Let’s not kid ourselves: a kicker is not going to win you a fantasy title. But in a tight match-up, you’ll take all the points you can get. All of these players are last-round selections, but you might as well have a strategy for crafting your kicker rankings. This list takes into account a kicker’s “fantasy points potential” (FPP), which is the total number of field goals (multiplied by three) plus the number of extra point attempts that his team attempted last season.

1. Matt Prater, Denver Broncos
2013 Stats: 25/26 FG, 75 extra points made
Prater set an NFL record for PATs last season with 75. The tricky thing about fantasy kickers is that the ideal offense is one that gets to the red zone and then stalls, allowing for field goal attempts. Denver doesn’t have this problem, but Prater’s many PAT chances and long, accurate leg more than make up for that. 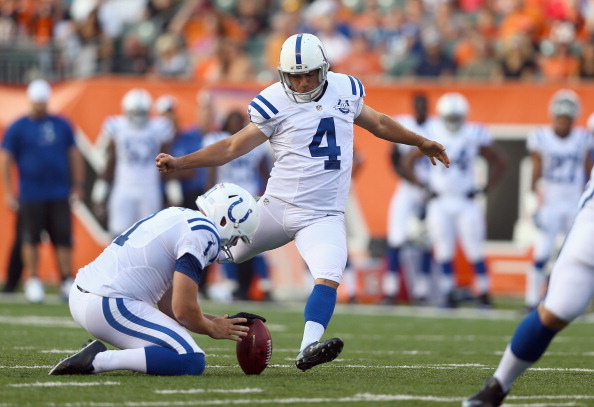 Adam Vinatieri #4 of the Indianapolis Colts kicks a field goal during the preaseason game against the Cincinnati Bengals at Paul Brown Stadium on August 29, 2013 in Cincinnati, Ohio. (Photo by Andy Lyons/Getty Images)

3. Adam Vinatieri, Indianapolis Colts
2013 Stats: 35/40 FG, 34 extra points made
Is there such a thing as a sleeper kicker? Vinatieri, who will turn 42 in December, keeps on delivering. He plays indoors, which helps, and figures to get plenty of field goal attempts again this season.

4. Mason Crosby, Green Bay Packers
2013 Stats: 33/37 FG, 42 extra points made
Crosby, like other high-ranking kickers, gets a boost by playing for a high-scoring team. His FPP is fifth despite coming off a season in which Aaron Rodgers only played in nine games.

5. Justin Tucker, Baltimore Ravens
2013 Stats: 38/41 FG, 26 extra points made
When evaluating kickers, you can’t forget to, you know, evaluate the kicker. And Tucker is one heck of a kicker. His 93 percent conversion rate on field goals tied him for sixth with Gostkowski, and none of the players ahead of him had nearly as many attempts. He’s got a big leg as well.

6. Nick Novak, San Diego Chargers
2013 Stats: 34/37 FG, 42 extra points made
Novak’s FPP ranks him fifth. He was on and off last season as far as scoring, but the Chargers are the type of offense that is good enough to get into field goal range but not quite good enough to score touchdowns consistently.

7. Phil Dawson, San Francisco 49ers
2013 Stats: 32/36 FG, 44 extra points made
Dawson will be kicking in a new stadium this season, and that’s enough to keep any kicker awake at night. While Dawson is busy studying the wind patterns and new grass, his fantasy owners shouldn’t fret too much, as the veteran is a solid choice. 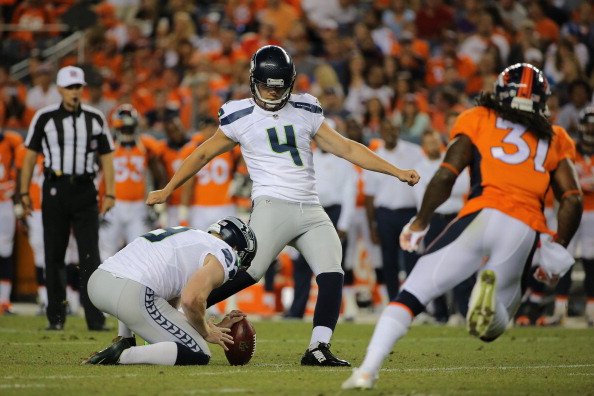 icker Steven Hauschka #4 of the Seattle Seahawks kicks a 41 yard field goal against the Denver Broncos during preseason action at Sports Authority Field at Mile High on August 7, 2014 in Denver, Colorado. (Photo by Doug Pensinger/Getty Images)

9. Dan Bailey, Dallas Cowboys
2013 Stats: 28/30 FG, 47 extra points made
You never know what you’ll get from the Dallas offense, but Bailey has shown he can deliver from well outside the red zone.