PHILADELPHIA (CBS) -- Philadelphia Police have released the identity of the woman who was struck and killed in a Center City hit-and-run early Sunday morning.

As officials continue to search for the driver of a newer model white Jeep Wrangler Rubicon with a white top and front-end damage, last seen traveling eastbound on Race Street.

Police say the victim 53 year-old Ann Broderick, from the Kensington section of Philadelphia was hit about 3:15 a.m. Sunday near Broad and Race Streets.

She was pronounced dead at Hahnemann University Hospital around 3:45 a.m.

Broderick is believed to be homeless and was reportedly sleeping nearby when she got up to cross the street and use the restroom.

That's when police say the car struck her. 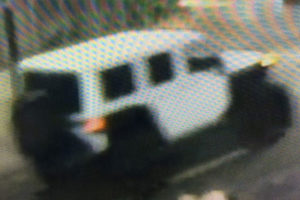 Police say there were no witnesses; a security guard patrolling the area found the Broderick with trauma to her skull on the street.

"Ann was vibrant, a beautiful soul even though her situation was her situation," said Abby Anderson, who volunteers with the homeless and says she met Broderick six months ago. "She was a human being. It broke my heart that had happened to her. She was family. I thank God I had the opportunity to give her a hug on Saturday."

There is no description of the driver at this time, but police say surveillance images in the area captured a  newer model white four-door Jeep Wrangler Rubicon with a white top, large tires and a spare tire attached to the back of the vehicle.

Investigators say the vehicle should have front end damage.

Anyone with information is asked to call police at 215-686-TIPS.