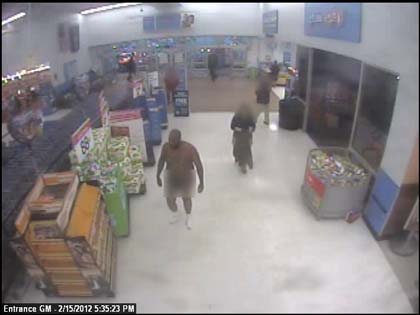 WEST WHITELAND TOWNSHIP, Pa. (CBS) – A 300 pound man stripped naked, walked into a Chester County Walmart and stole a pair of socks and the entire incident was captured on the store's surveillance cameras.

The incident happened at about 5:30 p.m. on February 15th at the Walmart in Exton.

Officers from the West Whiteland Township responded to the Walmart after receiving a report of a naked man walking into the store.

Surveillance video from outside the Walmart shows the suspect, 32-year-old Verdon Lamont Taylor, begin to take his clothes off in the parking lot as he approached the store.

Taylor, who is 6'4" and weighs nearly 300 pounds, entered the store totally naked and approached the customer service counter where he stole a pair of socks and put them on his feet.

Taylor then walked further into the store and surveillance video captured customers avoiding him as he strolled around the store.

When officers arrived, Taylor refused to comply with their commands and a Taser had to be used to take him into custody.

While in custody, Taylor began spitting, which struck one of the officers in the face.

It was not immediately known what prompted Taylor to strip and enter the store naked.

He is being held at the Chester County Prison after failing to post $50,000 cash bail. He has a preliminary scheduled for March 21st.