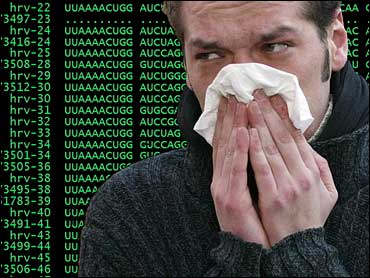 There's still no cure for the common cold, but a new study indicates help may be on the way.

The newly-released research, published in the Cochrane Library, finds that over-the-counter supplements containing zinc can reduce the severity and duration of a cold.

And that's nothing to sneeze at, because kids get between six and ten colds a year, and adults between two and four, accounting for 40 percent of missed work days, according to the Cochrane Library.

That contradicts the conclusions of numerous past studies, which showed zinc isn't an effective cold-fighter, "Early Show" co-anchor Erica Hill points out.

"Well, the controversy continues!" remarked CBS News Medical Correspondent Dr. Jennifer Ashton. "We're always looking for the cure for the common cold. This might not be the cure, but it certainly looks like it's a promising treatment.

"This was a study that looked at 15 other studies, a little over 1,300 people, and found that those who took zinc in supplement form every one-and-a-half to two hours reduced the severity of their cold symptoms, and shortened the duration of the cold. Not by a lot, by one day, but still, if you're suffering from a cold, that one day means something."

The zinc, Ashton added, could be taken "in any form. You could take it in liquid drop form, in tablet form, in the lozenge form.

"We have to remember when we're talking about zinc, like any other supplement, you can take too much of it. The side effects we're seeing were a little upset stomach, nausea, abdominal pain. You can get some mouth irritation. But again, they found that it did help them a little bit with their cold symptoms."

So, if you feel a cold coming on, should you just reach for the zinc?

"Right now," Ashton replied, "there's not conclusive evidence to support that. It can't hurt you if taken in moderate amounts. So again, that's what the study really showed. But the old standbys, when you're talking about treatment for the cold, because it's a virus, so there's no cure for it, the basics -- you want to rest. You want to drink plenty of liquids. You can reach for the over-the-counter cold remedies, pain medications, things like that. Chicken soup, one of the best things you can take for a cold and let it run its course.

"But if you want to shorten it by a day, zinc right now, according to this study, it looks like (zinc) will help."

"And wash your hands," Hill noted, "and if you're really sick, stay home."